Lianne Bassin ’07 uses music to encourage kids to be mindful

Power yoga was the class Lianne Bassin ’07 remembers most from Binghamton University. It’s not just because her homework was eating broccoli one day a week and waving “hello” to random strangers. The course introduced her to mindfulness, a concept front and center to what she does today.

Since graduating from Binghamton, Bassin has worked as an early childhood educator and performed children’s music in New York City. To date, she has recorded two CDs of original songs that encourage kids to be mindful. The newest offering, Everyone Grows, will come out next month.

“I started teaching mindfulness to kids after I took a Mindfulness in Education course at Bank Street [College of Education],” Bassin said. “I already had my own yoga and mindfulness practice, and I wanted to help children be more in touch with themselves and their surroundings. I read every children’s mindfulness book I could get my hands on, and became a certified children’s yoga and mindfulness instructor through Little Flower Yoga, as well as a mindful educator at Mission Be. I then realized I could merge my love of music and passion for mindfulness.” 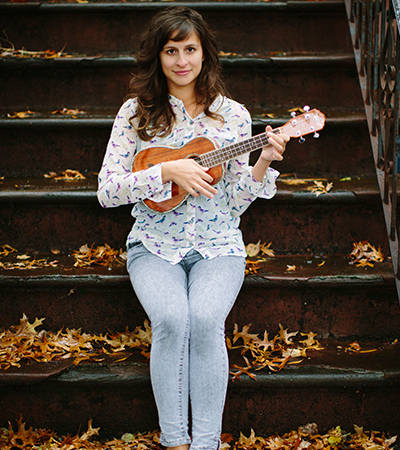 That merger was productive as Bassin wrote 21 songs. She received a grant from the Rodeph Sholom School to record her debut album, Breathe In, which earned the 2015 Parent’s Choice Award and a National Parenting Product Award.

Bassin’s music is intended to help children pay attention to themselves as well as their peers and surroundings. She wants to empower kids to show traits such as compassion, empathy, gratitude, kindness and helpfulness. While Bassin appreciates the awards, the real validation comes from the reactions the music inspires in kids and grownups.

“I have been very thoughtful about the lyrics I write, and my hope is that those lyrics turn into messages children can repeat to themselves and internalize,” she said. “Teachers and parents have expressed to me how much they appreciate being able to play meaningful music. When I see children singing along with me at shows or during my yoga classes, I know my music is making a difference.”

The music can only do so much, she says. Children become what they see around them, and that’s something parents and teachers should never lose sight of.

“We have to live and model the behavior that we wish for our future generations. To write effective mindfulness music, I have to live mindfully. I think the biggest gift we can give our children is the power to know that the answer to all their questions, their life path and their unknowns are contained within themselves. They just have to pay close attention and trust their intuition.”