John Copoulos ’73 grew up in Batavia, N.Y., and was a frequent visitor to the Albright-Knox Art Gallery in Buffalo. He credits his time at Binghamton and instructors Ferdinand “Fred” DeVito, Angelo Ippolito and Charles Eldred for fostering his lifelong love of art.

"Fred was a gruff, working-class guy," Copoulos said. "An important message he imparted to us all was that if you want to be a painter, make sure you have a job because you're not going to make money as a painter."

It was sage advice for Copoulos, who continued to make his art while earning a living as a legal secretary for major firms in the San Francisco area. Now retired, Copoulos gives to Binghamton University in a way that he hopes will increase students' appreciation for art.

Copoulos has donated prints to the University Art Museum. One of his first was a Max Beckmann print displayed at the museum's 50th anniversary exhibition in 2017.

“I’m interested in helping Binghamton because it helped shape my view of the world,” Copoulos said. “Aesthetics are important to me. When I was a student, the architecture at Binghamton was very institutional, so I wanted to support anything that adds to the beauty of the campus, such as giving to the Memorial Courtyard. By giving Binghamton pieces of art from my collection, I hope to inspire the students to engage with art.” 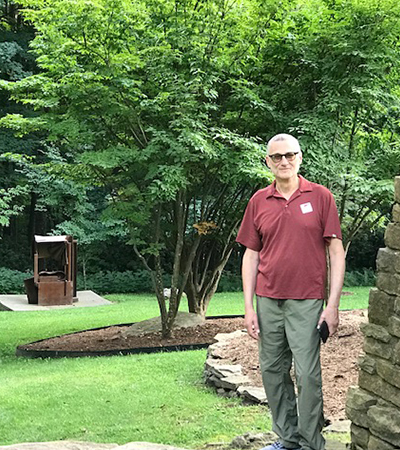 Copolous donated three prints to the current "not but nothing other: African-American Portrayals, the 1930s to Today" exhibition, viewable at the museum during Homecoming Sept. 20-21, and through the fall. Though Copoulos has a strong interest in Asian art, he was intrigued by African-American works of art after seeing them at the M.H. de Young Memorial Museum in San Francisco. One print depicts a quilt made by rural African-American women, the second shows an ironing board by Willie Cole that references African-American domestic labor, and the third print by McArthur Binion uses the visual language of minimalism to convey a personal memory.

“I wasn’t focused on collecting works by African-American artists, but these works spoke to me graphically, historically and politically,” Copoulos said. “They had special import for me.”

Copoulos has donated paintings and prints that will be in a 2020 exhibition at the museum featuring Asian works of art. He is also co-curating an exhibition in the spring with Stacy Newman Kandel ’99, featuring alumni donors and addressing how they live with their art.

"We want people to see that you don't have to be a rich person to collect real art," Copoulos said. "Not all art has to be of that magnitude. It just needs to speak to us for a specific reason, whether it’s political or personal.”