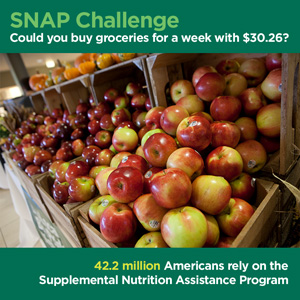 The Supplemental Nutrition Assistance Program (SNAP) — formerly known as food stamps — currently supports 42.2 million food-insecure Americans. Jason Flatt, a student in the master of public administration program, recently participated in a SNAP challenge in an attempt to better understand the struggles faced by these individuals, limiting his weekly food budget to $30.26 (the current weekly SNAP benefit per person) to simulate the experience of someone who relies solely on SNAP to purchase their food for the week.

Flatt's groceries for the week included pasta, eggs, a frozen pizza, a quart of milk and some ready-made rice. Taking care to not to go over his budget limit, he ended up spending a total of $28.96 on groceries for the week. Shopping on a SNAP budget was different from his usual shopping experience, he says, because he was very conscious of prices. Rather than buying his groceries freely, he found himself weighing all of his produce and basing his purchasing decisions on price alone. So the more expensive fresh foods lost out: three stalks of broccoli and a handful of green beans were the only fresh, healthy produce he purchased.

Flatt found that his diet quickly became unhealthy during the challenge, largely because his schedule did not always allow him to prepare and eat the food he had available at traditional meal times. "The kinds of foods you're able to purchase are not very transportable and not necessarily things that you can prepare in advance," he explains. "I work in Admissions, and I was giving tours all day. I was not home, and I was doing a lot of physical activity, walking around campus. I would eat a small breakfast in the morning and then go nine hours without eating until I got home. I couldn't prepare food in advance because I had to do homework when I got home and I didn't have time to cook something — not that I really had the food to cook anyway."

Flatt says this simulates how those who rely on SNAP face similar issues of working long hours, often having to go a long time between meals. Working parents often do not have time to come home to cook for their families at regular meal times. "The schedule of eating and understanding all that was the hardest part of the diet," says Flatt, "and I think it's one of the most under-recognized parts of the challenge of being someone who receives SNAP benefits."

The challenge was not something Flatt chose to do just for his own edification. He really wanted to bring awareness of the hardships faced by those relying on the SNAP program to a wider audience.

"I can use it as a vehicle for teaching people about the issue of hunger in the U.S.," he says, "[as well as] teaching people about SNAP and why it's important and how the proposed changes to the program via the [Trump administration's] food box proposal would be detrimental to people's abilities to sustain themselves with what limited resources already exist."

The Trump administration recently announced a 30% budget cut to the program in his 2019 fiscal year budget proposal, which would leave countless Americans food insecure. The administration has proposed that SNAP recipients who received over $91 a month through the program — around 80% of recipients — would receive half of their benefits through a "harvest box," in which the government would supply a box of non-perishable supplies, such as shelf-stable milk, ready-to-eat cereals, canned meat and canned vegetables.

While the cut to the SNAP program may not affect many students directly, Flatt says it's still an important issue to consider, as you never know what might happen down the road that could cause you to deal with food insecurity. "If we were suddenly to lose our job or lose our source of income, we still have bills to pay, tuition to pay, a car payment to make. We can't default on those, but we need to eat. SNAP helps take one bill out so that you are able to feed yourself for a short amount of time until you are able to have a higher paying job or acquire more income. It can happen to anyone."

Flatt completed the full week of the challenge with a deeper understanding on the issue of hunger, and now that the project is over, he is working on sharing that understanding with others. His SNAP challenge website contains his daily reflections during the challenge and educational information and advocacy materials, including resources for students who would like to contact elected representatives with their opinions on the proposed changes to the program.