As a freshman, Halley Gerber has already immersed herself in the Broome County community through a project with the Family Planning Center of South Central New York (FPSCNY) in downtown Binghamton. Gerber has a passion for women's rights, so when she had to choose a project for her social diversity, justice and activism class last semester, she was drawn toward a pilot project started at FPSCNY to provide underprivileged and homeless women with better access to feminine hygiene products. 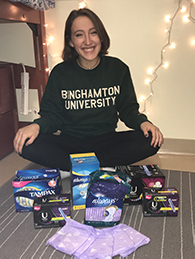 "At FPSCNY and Planned Parenthood and different walk-in clinics in the area, they give out free condoms, but they don't give out free tampons or pads," explains Gerber. "They're very expensive, and for a lot of homeless people or people living below the poverty line, it's hard for them to [buy] sanitary products instead of feeding their family or paying their electric bill."

Gerber and her classmates ran a month-long feminine hygiene product drive on campus, collecting over 100 boxes of products, which will be distributed by the FPSCNY. She is hopeful that this will contribute to a successful pilot program, allowing FPSCNY to use the data gathered to inform future grant proposals that will allow the program to grow.

The class project was not Gerber's first venture into the fight for women's rights. A year ago, in support of the first Women's March in Washington D.C., she and her mother teamed up to raise money for Planned Parenthood. Her mother made hats for friends who wanted to show solidarity with the marchers, and Gerber took on the business role, marketing and selling the hats online. They ended up raising around $1,000.

The question of women's equality is something that Gerber says she has had occasion to ponder for pretty much her whole life. "I'm a twin, and I have a twin brother. So I guess my whole life, I've seen it. We lead pretty much parallel lives - we were raised by the same family, went to the same schools, had overlapping friend groups. So even though our parents raised us the same, which is great, I've seen the divide."