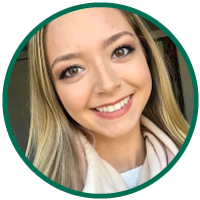 Courtney Abbatiello is a senior Decker School of Nursing student and the president of Wishmakers on Campus. This student organization fundraises for the Make-A-Wish Foundation, a non-profit organization that arranges experiences or "wishes," for children who have been diagnosed with life-threatening medical conditions. Wishmakers on Campus is specifically affiliated with Make-A-Wish of Central New York and hosts a number of events throughout the year to raise money for the foundation.

Abbatiello has been involved with the Make-A-Wish Foundation since high school and joined Binghamton's club her freshman year. She joined the e-board as co-head of external affairs her sophomore year, became the vice president the following year, and has since become president. She has enjoyed seeing the club grow since joining, as it is a fairly new student organization.

This cause is very close to Abbatiello's heart, as her brother, who is healthy now, was at one point diagnosed with cancer and granted a wish from the foundation. Her brother's wish was to go to Turks and Caicos, an archipelago of 40 coral islands southeast of the Bahamas. A previous family vacation there had been cancelled due to his diagnosis. After her brother had treatment and his immune system was strong enough, Make-A-Wish granted his wish. Abbatiello says the foundation made it so special for their family and describes it as a trip they still talk about today and one they will never forget. 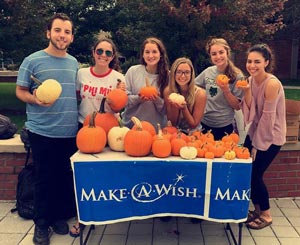 Abbatiello truly loves being a part of Wishmakers on Campus and raising money for such a great cause. One of the ways they fundraise is through their annual pumpkin sale. The club picks pumpkins, brings them back to campus and sells them, allowing them to raise awareness for Make-A-Wish in addition to money. The sale was very successful this year, as they sold all of their pumpkins. Another event they host every spring to raise money and awareness is Walk for Wishes. The club hosts this 5K on campus and promotes it to students and local community members, who are encouraged to make a donation upon signing up.

One of Wishmakers on Campus's biggest events of the semester is also coming up soon. Every year, they host Letters to Santa-thon, an event where teams and individuals can sign up to compete to write the most letters to Santa. The club then gives the letters to Macy's Department Store, who donates one dollar to the Make-A-Wish Foundation for every letter given throughout the holiday season, and two dollars for every letter given on National Believe Day in December. The Wishmakers donate the letters written at their event on National Believe Day in order to raise the most money possible for the foundation. According to Abbatiello, last year they raised over $50,000, which she says is the record for the "largest donation given by a single group across America." 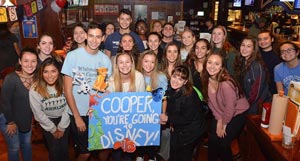 In addition to raising money and awareness for Make-A-Wish, the club has also done wish reveals for kids. For example, last year they organized a flash mob at Tully's to tell a child their wish of going to Disney Land had been granted. Abbatiello says the child was so surprised and described it as an amazing and special moment for the club.

Abbatiello is passionate about the Make-A-Wish Foundation and cherishes the experiences it has brought her. "I know first-hand what it's like to have Make-A-Wish come to your house and do all of this for you, so it's just really cool that I have been able to give that experience to so many other kids and families."

Email Wishmakers on Campus to learn how you can get involved.

Request to join the club on B-Engaged to receive emails from them about upcoming events.

Attend the 5th Annual Letters to Santa-thon event from noon to 4 p.m. on Dec. 7 in the Mandela Room. Contact them to register a team or attend as an individual. There will be free cookies and hot cocoa, holiday music, a cappella performances and prizes!