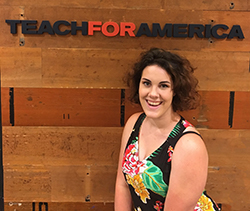 Like many Binghamton University students, Miranda Currier, a junior at the time, walked into the Center for Civic Engagement (CCE) office last winter looking for an opportunity to volunteer in the local community. She didn't have any particular agenda in mind, and when a CCE staff member suggested a mentoring program at Windsor Middle School, she jumped at the opportunity. "I thought it sounded great," she says. "And I want to be a teacher, so it worked out well."

The Windsor Mentor Program is one of several volunteer opportunities and internships that have arisen through a unique new partnership between Binghamton University and Windsor Central School District (WCSD), in which the school district funds a graduate assistant in the CCE, who is dedicated to working directly with Windsor administrators to identify opportunities to connect the rural school district with Binghamton University students and other resources.

This graduate assistant is part of the CCE's Community Schools and Youth Programs team, which develops volunteer opportunities and coordinates student volunteers in a number of local school districts, in support of the University-wide Promise Zone Community Schools initiative.

"Our goal [with building] the mentor program here at Windsor was twofold," says Toby Youngs, associate principal at Windsor Middle School. "To help our students socially — to be a positive role model — but also to help them academically. The program is obviously meant to benefit our students here, but we understand that it's also educational for the mentors coming in, so we want to put them in positions where they may have to think on their feet, interact with kids, respond to different situations and try to help them build that capacity, too."

Currier, a math and economics major, was assigned to mentor Katie* who was struggling with math. Though the program only required four hours of her time each week, Currier soon found herself at the middle school more and more. "It was just incredible to me how different Windsor was from my middle school," says Currier, who grew up in Binghamton. "It was cool to be so welcomed into an environment that I was a stranger in."

In addition to helping out with various after-school programs — chaperoning a school dance, participating in a volleyball tournament and even coaching a team in a school dodgeball tournament — Currier also picked up a second mentee partway through the semester.

Eric* was in a number of the classes Currier attended with Katie, and she soon noticed that he was getting in trouble a lot and not really engaging with his peers in positive ways. Having developed a positive rapport with Youngs through her mentoring experience so far, she told him she had noticed that Eric could use some support and would like to take him on as a second mentee. Youngs gladly agreed.

"Miranda was a great addition to our school. She is her own thinker. If she felt that her time could be better used, or if she had an idea of how to help out with something or provide additional academic help with another student, she wasn't afraid to express her opinion. So I appreciated that perspective. And not only did she mentor our students and provide a good role model for them, but she went above and beyond and really became part of the community here."

And apart from her joy at being welcomed into the community, Currier truly felt that she made a difference in the lives of the students she worked with.

"Eric stopped getting detention. He had detention exactly one time after I started hanging out with him, and it was actually one week that I wasn't there. And Katie's math grades got better. She ended up passing math, so that was really exciting."

Youngs also noticed the impact Currier made during her semester of volunteering, and took action to keep her involved in the Windsor community.

"I told her she was not allowed to leave the district without filling out an application [to substitute teach], because one, I think she would be a great substitute teacher, and two, I think it would help her grow in her profession. We're looking forward to having her sub here as much as she can."

Now a senior, Currier is avidly looking forward to substitute teaching this year.

"The superintendent told me they typically don't hire non-degree-holding applicants, but because of the [Windsor Mentor Program] they would make an exception. I'm actually going to start substitute teaching this semester, and I applied to four other school districts because I'm super excited about it!"

Currier says she had begun to doubt whether teaching was the right profession for her, but after her experience last spring, she has fully recommitted to a career in education. She gained early admittance to the Teach for America program and is excited to be moving to Tulsa, Okla., after graduation to teach high school.

"Miranda is a great student for Binghamton University," says Youngs. "You guys should be proud that you've helped build her up as a future educator, because she's going to be great for the kids."

*Name has been changed.

Volunteer: Students who are interested in volunteering in local schools can find more information on the CCE's Community Schools website.