On Thursday, December 4, Alexandra Abel ’12, spoke to more than 30 students about her career as an Assistant Editor for Seventeen magazine through the Cool Connections, Hot Alumni program. The virtual program, which is a co-collaboration between the Alumni Association and the Fleishman Center for Career and Professional Development, is designed to connect students with alumni in a variety of careers.

Abel began the program with saying that she always wanted to work in magazines, but entering college she was uncertain about how to place her dream into a career. As a freshman, Abel originally took courses towards a major in psychology.

Her uncertainty about her career dream dissolved when Abel attended the Harpur Panel, “Liberal Arts to Communications.” At this panel, local professionals in the field of communications provided insight on their specific careers.

One professional on this panel, a producer at Fox 40 WICZ-TV News, delivered moving advice about finding happiness in career decision-making. 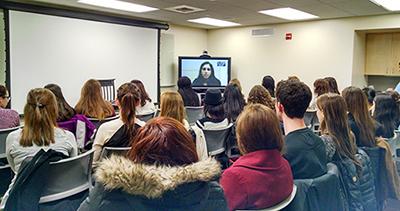 “She told us that whatever we wanted to do, we just had to go for it,” Abel said. “It made me realize that I had to at least try, especially when I’m young.”

After the panel, Abel talked to the producer about her career goals.

“She told me that Fox 40 WICZ-TV had lots of internship opportunities,” she said. “So I applied the following semester and got in.”

Abel said that her time at Fox 40 WICZ-TV was beneficial because she learned about the field journalism, one specific type of communications. She changed her major to English Literature and began to work at Pipe Dream, Binghamton University’s student-run newspaper. Inspired to become well-rounded in all forms of communications, she interned at MMW, a public relations company, in New York City the following summer.

After gaining more experience in the field of communications, Abel realized that she still wanted to work for magazines.

"I did everything I possibly could to meet people who worked at magazines,” she said. “I went to meet-ups in the city, to panels, just to learn more about the magazine business and careers.”

With her go-getter ambition, Abel landed a Health and Nutrition internship at SELF magazine. Pursuing her strong focus, she then interned for Marie Claire.

After graduation, Abel traveled to Israel and interned at Jewishpress.com. During this time, she reached out to her contacts, inquiring about any available job positions. One of these contacts was a friend she had met at a magazine panel, who happened to work full-time at Seventeen magazine.

Thanks to her friend, Abel scored a position as a freelance writer at Seventeen. After freelancing for a couple of months, the position of Assistant Editor opened up for the Lifestyle and Entertainment sections. So Abel applied, and was gladly accepted.

As an Assistant Editor, Abel now manages feature, lifestyle, and entertainment stories, as well as the Traumarama, or embarrassing stories section.

Abel said that what she finds most challenging about her position is that since Seventeen is a teen magazine, she feels pressured to keep up on the latest trends.

“You always have to be on top of pop culture and what’s trending,” she said. “For example, since magazines work months ahead of time, right now we’re working on the March issue. It’s almost as if you have to predict the future.”

Abel said that although her technical hours are from 9:30a.m. to 6:30p.m., the time she spends at work can vary, depending on the department one works in and the time of year. On days when the magazine is published, Abel said that she must wait at the office until the issue goes to the printer.

But the best thing about her job, she says, is the perks.

Abel then gave insightful career advice, encouraging students to reach out to professionals in their desired fields.

“Don’t be afraid to reach out to someone who you’d like to get inside their head,” she said. “Meet them for coffee, or even talk to them on the phone.”

If you have a LinkedIn account, Abel said, send professionals a message about your career goals, and don’t just connect with them.

“This is something that’s done so little of the time so it makes you stand out,” she said,”and it also makes it more personal.”

When trying to stand out at interviews, make sure to know the company.

“Be specific,” she said. “For example, if you want to go into fashion (in a magazine department), don’t just say, ‘Oh I love your fashion layout’ because you can say that about any magazine.”

When it comes to writing resumes, make sure to highlight your professional positions, whether they are jobs, internships, or leadership positions. Even if they aren’t journalism related, Abel said that employers like to see that you have some kind of non-academic experience.

Abel also encouraged students to take advantage of all the journalism-related opportunities at Binghamton, such as Pipe Dream, internships, and journalism classes.

“Even having a blog is great,” she said, “so employers can see your raw writing samples without heavy editing.”

Abel ended the program by urging students to stand out as interns and as potential employer candidates.“Employers look for someone who’s organized, hardworking, passionate,” she said, “and really loves what they’re doing.”