As part of Homecoming Weekend 2015, Binghamton alumna and NASA Senior Materials Research Engineer Dr. Frances Hurwitz '66 discussed her career path and the adverse circumstances she overcame as a woman in her field for the "Cool Connections, Hot Alumni" speaker series.

Recognized by NASA for outstanding contributions to the field of materials sciences, Hurwitz has contributed to 4 book chapters, over 100 scholarly articles, and a patent since starting at NASA in 1979. Through her vast knowledge of materials composition, Hurwitz has participated in several high-priority NASA projects. Hurwitz was part of the committee that investigated the 2003 Columbia shuttle disaster, even testifying before the Columbia Accident Investigation Board. She was also consulted by the Department of Defense to be a technical advisor for materials used in NASA programs.

Hurwitz's path to success took her down many different roads. Graduating from Binghamton University in 1966, Hurwitz took a pharmaceutical job in quality control before returning to school for an advanced degree.

Hurwitz earned her first master's degree in Library Sciences. She then entered a second graduate program in macromolecular sciences, thanks to a dare from her husband, subsequently earning her PhD.

Upon completing her PhD program, Hurwitz found employment at NASA. She considers herself fortunate to have been hired there, given the cyclicality of their employment pattern.
"I was on the right doorstep on the right day," said Hurwitz.

Hurwitz spoke about being a woman in a historically male-dominated career. Her first experience with sexism was in her pharmaceutical job, where she observed a significant salary discrepancy. She was told later that, as a woman, she could not seriously pursue a research career. Despite the obstacles, she maintained her career goals. 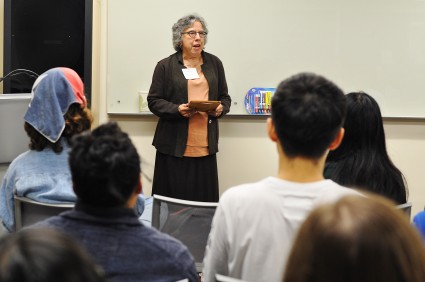 In 2014, she received the Achievement Award from the Society of Women Engineers, which she noted is an important organization for the progression of women in the workplace.

Hurwitz enjoys helping student interns develop their skills, and highly recommends lab and research internships to others. Most of her interns enjoy these experiences, and they are equally valuable to those who do not.

To be seriously considered for internships with NASA and similar companies, Hurwitz recommends that students be passionate and have applicable coursework, credible letters of reference, and a comprehensive understanding of lab safety procedures.

Hurwitz also suggests that aspiring engineers learn to write proposals, a skill necessary to combat the widespread lack of funding in research.

Above all, Hurwitz said, students need the motivation to persist

"Getting a graduate degree is more about perseverance than anything else," she said.