Jenna Wolfe '96 and Why Fate Loves The Fearless

Jenna Wolfe '96 returned to campus on Wednesday, November 11, depicting the story of her career journey  since  Binghamton  and  hinting  about what's next.  Jenna's  talk  was part of  the Cool Connections, Hot Alumni program which allows current students to make cool  connections with hot Binghamton University alumni doing interesting things in a variety of fields. Her inspirational 60-minute program to the nearly 100 person audience resembled more of a motivational  speech than an alumna offering career advice  about breaking into the field of communications.

What could possibly be next  for the  broadcast  journalist who seems to have done it all? Simply, to go have fun and take chances, wherever she may end up, as  long as  she remains challenged and inspired. While fear may not be what we expected, Wolfe's goal is to do "something super super scary," because although an amazing experience, after 8.5 years at The Today Show it wasn't scary   for her anymore. When something becomes too comfortable, it gets repetitive, so hopes never to reach  a standstill in her career (or her personal life), advising everyone in the room to avoid staying in one lane for too long. In fact, she urges, get outside of your comfort zone all together, because while staying inside of a bubble is easy, it will take you nowhere. Her advice? Stop being so careful and no matter what you do in life, "scare yourself in a way that you didn't think you could." 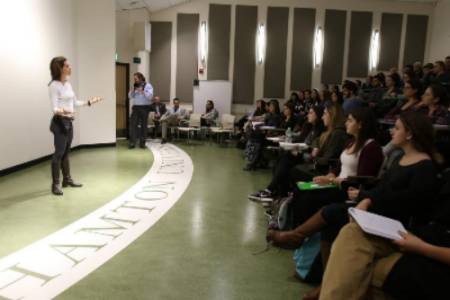 Regarding her time at Binghamton, Wolfe admits that she was  always lucky to know exactly what she wanted to do. No matter  what,  she took chances, driven by the belief that her two options  were  "either be on TV or be homeless." Knowing this, upon arrival to  campus she biked from her residence hall room to the local FOX  affiliate, knocked on the back door, and requested an internship.  Garnering a few laughs, she biked back to campus, stormed the  English Department and demanded the application that had been due  weeks previous. Eliminating any obstacle in her path, she whited-out  that day's date, replaced it with one from weeks previous and biked  back with her "on time" application. It's clear to see that she was  "ballsy and had chutzpah" and as it turns out, it worked, she was their new intern for the next 8 semesters.  Creating her own rules the entire time, she owes this success to the fact that she "was the best bull shitter ever, that's why I was the best intern ever."
This motivated, won't take no for an answer attitude followed her throughout her career, exemplified when she decided it was time to leave Binghamton so she sent out 69 job applications, consequently receiving 69 denial letters but still ignoring her parent's advice to pack up and come home. She eventually received her 70th letter, the one which invited her to interview for a position, which she would later accept.Seeing that much of her profession is learned on the job and not in a textbook, Wolfe learned everything that FOX had to offer and took in every experience she could during her four years. One of her favorite parts of her job is the fact that "there is no foolproof path to get into the business," so she tried, tried, tried again until finally, it worked.

While listening to someone so inspiring, we were reminded that there is only so much in our control, so when it comes time to go after your goals, "prepare as much as you can, and whether you get the job is up to fate, not up to you." I think it's safe to say that everyone in the room is looking forward not only to their own adventure after hearing Jenna Wolfe speak, but to seeing what is next for her, knowing that failure never has and never will delay her journey, and it shouldn't ours either. Just remember that, as Wolfe's motto goes, "fate loves the fearless".