Alumna MD Judith Brenner spoke to nearly 20 students as part of the Cool Connections, Hot Alumni speaker series about her experiences at Binghamton, her time as an MD and how it all led to her current career as Associate Dean for Curricular Integration and Assessment at Hofstra University.

Brenner graduated in 1990 with a BA in Chemistry. Entering college, she always knew that she wanted to become a doctor. She took her MCAT in the beginning of junior year and did research with a professor that was later published; to say that she was driven is an understatement.

“I liked the challenge of chemistry. People would always joke about how if I had twenty minutes I would use them to read my textbooks,” she said.

Despite her determination to go to medical school, Brenner reflected positively on her involvement on campus as an RA in CIW. She explained how it was one of the best decisions she made in college. This experience reinforced her love for working with people and programming, which highly reflects her current career as Associate Dean.

Between balancing schoolwork and all the responsibilities that go into being an RA, Brenner was accepted to New York University School of Medicine and completed her residency and chief residency at Bellevue Hospital.She credits Binghamton for giving her the necessary tools and the confidence to succeed in medical school.

Towards the end of her residency, Brenner got married to a Binghamton alumnus and together they have four children. This next step to have a family transformed her path in medicine. She explained how at the time being at home with her kids was just as important as practicing medicine, if not more.

“My biggest struggle was the decision to stay home, but I believe that you need to look inside yourself and see what’s important to you. Your vision changes over time,” she said. 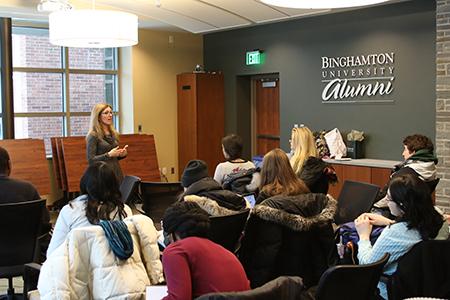 However, she wasn’t ready to give up on practicing just yet. She went on to working part-time which made the balance of work and parenting much easier. As Brenner’s children got older, opportunities opened up and she began to take them. One of which was teaching medical students at Hofstra School of Medicine.

She emphasized to students to always open doors that are offered, because you never know what’s behind them.That attitude and way of thinking led her to becoming the Associate Dean for Curricular Integration and Assessment at Hofstra. “In college, I could never predict what I would be doing 10, 15, or even 20 years later. We try to plan our futures, but sometimes we can’t,” she explained.

Even though she misses practicing from time to time, she loves that her job enables her to supervise and advise medical and residency students because it allows her to still interact with people.One of the biggest takeaways from this program that Brenner highlighted was how college and life in general goes by in a flash.

She said, “I wish I had understood that I could have really done anything undergrad and still gone to medical school because life is too short to not do what you love.”