A career with a purpose, social entrepreneur Ian Johnstone '04, MBA '05

Alumnus Ian Johnstone virtually spoke to nearly 30 students and faculty about his expertise in entrepreneurship, more specifically his role as a social entrepreneur as part of the Cool Connections/Hot Alumni speaker series.

Co-founder and CEO of GunByGun, Johnstone positively impacts society by facilitating gun buybacks, providing a non-political outlet through which individuals can participate in results-oriented activism. He also works as part of the Strategy/Operations team at TruBrain, a consumer-based start-up that sells productivity enhancing beverages to consumers online.

Johnstone, however, explored several different avenues of employment before finding his true calling.

Graduating from Binghamton University in 2005 with an M.B.A. in Marketing and Organizational Leadership through an accelerated degree program, Johnstone put the political knowledge he had gathered through years of political internships with the Democratic Party to use in the CORO program. Describing it as "the medical residency program for public policy", he rotated through several agencies and built on his foundational knowledge. 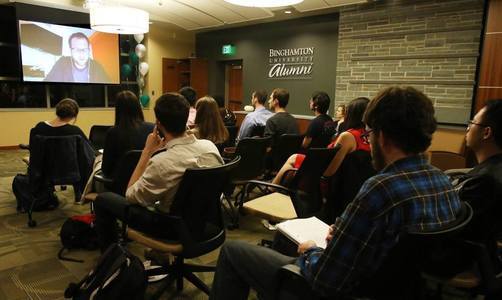 Seeking to put his business administration skills to use out of college, Johnstone worked at Pricewaterhouse Coopers, where he stayed for three years. Here, he developed his strategy, operations and consulting skills.

Though it was a lucrative opportunity for him and his skill set, Johnstone left PwC, seeking a more intellectually challenging position.

"I stuck around way longer than I should have," he said. "I felt myself regressing as a professional."

Eager to explore the world of entrepreneurship, Johnstone moved to California, where he feels at home.

He credits this location as being instrumental in his success. "Living in San Francisco," Johnstone said, "was a huge way to get off the ground."

Here, he co-founded Blissmo, a consumer based tech start-up focused on connecting consumers with socially responsible companies. Supplying consumers with organic and eco-friendly food, Blissmo helped Johnstone find his way in the world of start-ups.

Having lost his father to gun violence at the adolescent age of 10, gun control has always been at the forefront of Johnstone's policy agenda. Following the tragic Sandy Hook school shooting, Johnstone founded GunByGun, a non-profit organization seeking to create a safer world by eliminating illegally owned guns from the streets.

By taking a "market-based libertarian" approach, GunByGun offers citizens a tangible way to effect social change while bypassing the political process, operating instead through crowdfunding.

Though Johnstone uses both his policy expertise and management experience to help GunByGun excel, he said it was difficult to differentiate where he gained his skills. "It's kind of a blur-I'm not sure what I learned where."

To date, GunByGun has removed 750 illegally owned guns from homes and raised more than $80,000. Johnstone urged that students interested in entrepreneurship and start-ups immerse themselves in an early stage company to gain experience before starting their own. He also warned students to avoid being stuck in the idea phase.

He noted that mistakes were inevitable. "Fail quickly, and fail often," Johnstone said.

Finally, Johnstone recommended that students utilize their own skill set. "You want to be somewhere where you are uniquely positioned to do something others aren't."