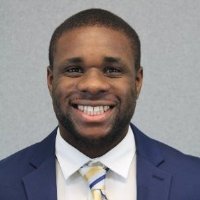 At the start of his sophomore year, Tyron Brown found himself in a slump. He lacked motivation, and he and his friends were having "too much fun," he said. When his academics started to suffer, he made the decision to start down his road of redemption.

"I wanted to find out who I was, and what I was capable of," Brown said.

The following semester, he earned a 3.75 GPA.

Brown, a senior English major, came to Binghamton in 2011 through the Educational Opportunity Program (EOP), a program dedicated to providing economically disadvantaged students who show the potential to succeed in college, with opportunity and access to higher education.

"When you are surrounded by people from the same background as you, and who are working extremely hard for what they have, you are reminded where you came from, but also of you where you need to go."

Brown attributes a large part of his success to his EOP academic counselor, Erik Colon. When he didn't know where to turn his sophomore year, he went to Colon for advice.

"I said, 'Erik, I don't know what I want to do in life.' It was getting to me. I felt like my education wasn't manifesting. College can be like that — you feel like you're going nowhere because you're in the same setting for so long, or you might not have goals."

Colon introduced Brown to the staff and programs at the Fleishman Center for Career and Professional Development.

Brown became adept at using the Fleishman Center's online job and internship portal, hireBING, which he used to find two internships: one working as a community outreach coordinator at a camp for foster children, Camp Felix, and one at the University's Multicultural Resource Center (MRC) as a program coordinator.

"I've always felt diversity is important, not just for the sake of putting people with different backgrounds together, but because of the thinking power behind it. ...but because it has the power to make you think and learn differently. When you find out how someone else thinks and what their ambitions are, those ideas are what are going to be inspirational to you. Those are the things that are going to change your mind. And those are the things that are going to give you a different perspective on life," Brown said of his time at MRC.

After these successes, Brown became fixated on the career and networking events the Fleishman Center hosts and made a point to attend every one he was able to.

"I think I hold the record... I think I'm in the hall of fame for attendance," Brown said with a laugh. "I started going to alumni panels and networking events. I would see these successful people and think, 'Wow, they came from Binghamton and started out with a bachelor's degree, just like me."

His efforts proved worthwhile at the fall Job and Internship Fair.

"When I went to the career fair sophomore year, I was sloppy. This year, I was prepared. I knew how to dress and my cover letter and resume were strong. I pursued Macy's and their representative liked the energy I brought. For me, that was a big deal. I was prepared and next thing I knew I had an interview in New York City and a job offer."

Upon graduation this May, Brown will begin Macy's Executive Development Program for Store Management in Albany.

Though Brown has enjoyed his fair share of professional success, his personal development he attributes to his work in campus activities.

"I had a job as a mechanic at the campus bowling alley and was promoted to manager. I started working a lot of hours because I was tired of going out," Brown said. "I realized that the people at LateNite who work within the school community, are the people who learn something about life. They learn what it is to work. College shouldn't necessarily be a playground, it should be a breeding ground for your mind to expand, and a place for you to find out who you are."

"Everyone has problems and everyone goes through crisis," Brown says. "I want to motivate people the way I have been motivated by my EOP counselors, the Fleishman Center staff, and others who put me on the right track. I was lost, but I found direction, and all my ambitions are manifesting into reality. It's tangible— I can see it and I can feel it. It's a coming of age."

Brown's long term goals include setting up a scholarship at Binghamton University in his name for disadvantaged Broome County students, as well as starting his very own non-profit, "Stay Strong in America, Inc."