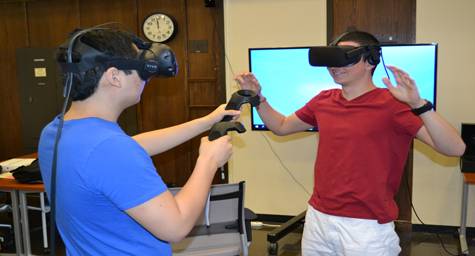 What is Virtual Reality?
Virtual Reality is a three-dimensional, computer generated environment; which you can look around 360 degrees, just like the real world. The user wears a VR headset with a high resolution display(s) boasting a 90Hz refresh rate and 110 degrees field of view. Two lenses create a stereoscopic view which mimics the way the eyes see, and causes users to believe they are immersed in the virtual world. The headset is tracked so when you move your head in reality, your view is aligned in VR.

What VR systems do we have?
In the studio, we have an Oculus Rift and an HTC Vive Pro. The Oculus Rift brings you to virtual worlds right from your seat, includes a controller for interaction, and now has hand motion controllers. The Vive is capable of room-scale VR, allowing the user to walk around a virtual space, and interact with the world via two hand motion controllers. With the added benefit of a wireless headset, the Vive now can be utilized beyond the ETS.

What can I do with the VR systems?
We have several experiences and games available for each system including Tilt Brush, QuiVR, Accounting, Job Simulator and more. Come by and check them out!

Who can use the VR Systems?
Any Binghamton University students, staff and faculty may use the VR systems. The first time you visit to use a VR system and ETS member will run you through a brief training session.