‘The Binghamton Nuvolone: Restoring an Object in Six Parts’ to open at Binghamton University Art Museum 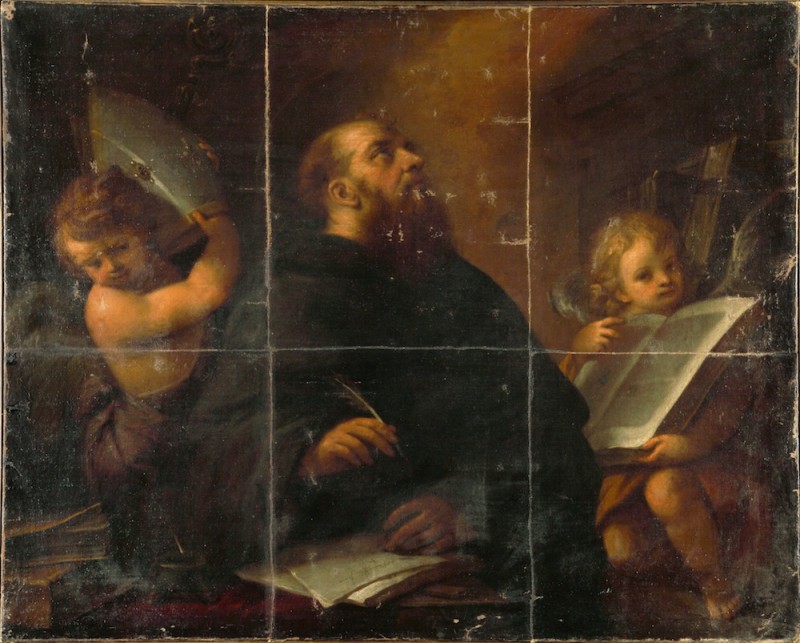 “The Binghamton Nuvolone: Restoring an Object in Six Parts” exhibition opens Thursday, March 15, in the Binghamton University Art Museum, with an opening reception from 5-7 p.m.

This unusual exhibition, which runs through May 19, focuses on a single work from the permanent collection: a 44” x 55” canvas painted by the Milanese Baroque painter Carlo Francesco Nuvolone (1609-1702), depicting Saint Benedict with two cherubs. Most remarkable for its condition, the painting had been cut into six pieces, then reassembled without any effort to disguise the damage. The painting had long belonged to Max Eisenstein (1884-1980), a successful Viennese businessman who fled Austria with his family in late 1938 and settled in Binghamton. His son, Norbert Eisenstein, gifted the painting to the gallery in 1982.

Eisenstein’s biography will be explored in this exhibition, and yet, it is just one of the various avenues of inquiry pursued by a team of professors and consultants. The co-curators of the exhibition, Karen Barzman from art history, and Neil Christian Pages from German studies and comparative literature, teach at Binghamton University. They have been assisted by others with special expertise: Joseph Tanski, professor of chemistry from Vassar College; Susan Blakney, paintings conservator from West Lake Conservators; as well as geology professors Richard Naslund and Jeffrey Pietras; and classics professor Hilary Becker from Binghamton. Visitors to the exhibition will come to understand the painting as an object that generates multiple narratives: its creation in the 17th century, Max Eisenstein’s life in Vienna, his flight to Binghamton, his efforts to restore his property, the puzzling condition of the painting and its recent conservation.

The exhibition will be presented as one stage in a research project that has taken team members as far away as Vienna for archival research and Arizona to interview Eisenstein’s surviving family members. Many of the findings will be presented on labels in the exhibition, but much more will be given by team members and invited guests at a public symposium at the museum from 4-7 p.m. Thursday, May 3, near the close of the exhibition.

Two small, additional installations will complement the Nuvolone exhibition. Drawn from the rich holdings of the Max Reinhardt Archives and Library in the Special Collections of the Binghamton University Libraries, one installation will present a selection of materials on the life and work of the Austrian-born theatrical director and producer Max Reinhardt (1873-1943). Also on view will be a gathering of objects, photographs and papers relating to the work at the close of WWII of “Monuments Man” Kenneth C. Lindsay (1919-2009), founder of the Harpur College Art Department and the Art Gallery who spent two years working for the U.S. Army finding, researching and restoring to the proper owners artwork that had been looted by the Nazis during the war. Lindsay’s papers will soon be deposited at the archives of the Binghamton University Libraries.

All events are free and open to the public.