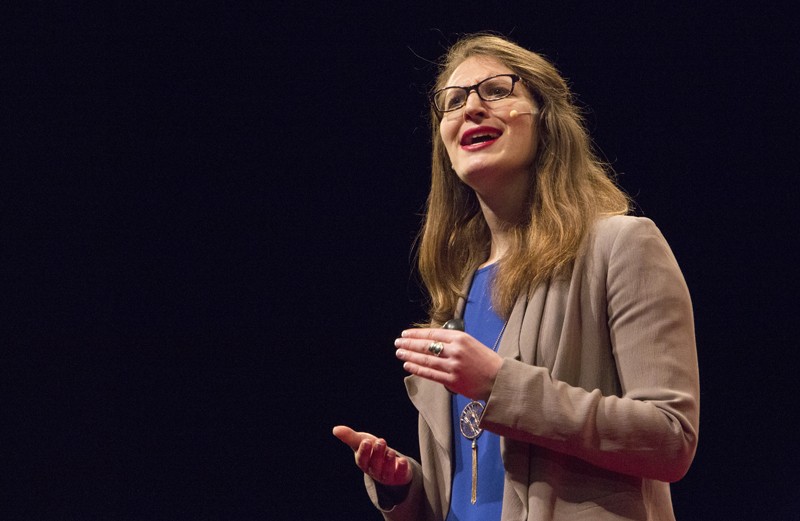 “I envision a world in which this word becomes redundant because it is so embedded into the way that we operate as a society,” she said.

Tracy was the alumni speaker at the 2018 TEDxBinghamtonUniversity event at the Osterhout Concert Theater on March 25. Eight speakers delivered 15-minute talks based on the theme “Infinity: Come see what’s possible.”

For Tracy, who now works for Lockheed Martin in the Washington D.C. area, sustainability is more than just recycling a water bottle.

Sustainability has been a major part of Tracy’s life since she was a mechanical engineering student in the Thomas J. Watson School of Engineering and Applied Science. Her projects at Binghamton University ranged from determining the possibility of generating solar energy in Binghamton (“one of the cloudiest places in the country!” she said) to developing a bike-share program that remains active on campus.

“When I was sitting in your seats, never in a million years did I picture myself working for Lockheed Martin, the world’s largest aerospace and defense contractor,” she told the students and community members in the audience. “I envisioned myself becoming an architect - designing buildings that generate more energy than they consume - or a university director of sustainability, or the next urban bike-share developer.”

Tracy had uncertainty at Lockheed Martin after her first assignment was shifted to the design of a stern door for a combat ship. She drove to company headquarters and found the company’s sustainability office “tucked in the corner” of the building. There were five people representing a corporation of 100,000 employees.

“I realized that sustainability wasn’t just about me or the five people in that small room,” said Tracy, who received her master’s degree in sustainable systems engineering from the University of Wisconsin-Madison. “It was about my company, my country, my species.”

Tracy also realized that the military - and aerospace/engineering in particular - has the potential to play a major role in sustainability.

Learning that the Department of Defense is the largest consumer of energy on the planet (with a $16.7 billion annual energy bill) provided Tracy with opportunities to make a difference.

“I thought: ‘What if our ships were equipped with LED light bulbs? What if energy dashboards alerted the captain of instantaneous fuel economy?’” she said.

Tracy’s job now focuses on energy conservation within Lockheed Martin, where she has worked on solar-energy and artificial-intelligence projects.

All industries have a role to play in sustainability, Tracy said, emphasizing that Apple may form its own utility because it generates so much of its own power. Oil companies are focusing on renewable energy, while the U.S. Air Force is now the third-largest investor in renewable energy in the world, she added.

But it is the people who need to conserve more for the benefit of future generations and the “sustainment of humanity,” Tracy said.

“We need to rethink how we use energy within - and outside of - the defense industry,” she said. “If everyone walks out of this room and doesn’t change, we will have a major problem.”

Tracy, who is also a singer-songwriter, opened and closed her talk by playing the ukulele and singing the chorus of John Mayer’s 2006 hit “Waiting on the World to Change.” The song’s message helped to form Tracy’s advice to the audience.

“What you do matters,” she said. “When someone asks you to design a door - a door that you didn’t sign up to design - what will you do about it? You will each have your own mission, your own way of making the world a better place.

“Go find those doors and open them, even if they don’t seem obvious. Go change the world. Don’t wait for the world to change.”