The Binghamton State Hospital is unused, but retains its dramatic presence inside and out. 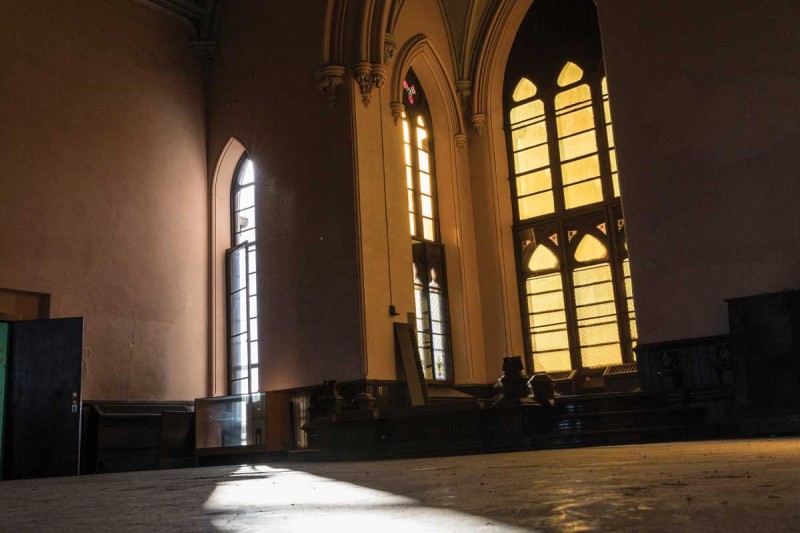 The Binghamton State Hospital is unused, but retains its dramatic presence inside and out.
By Diana Bean ’81

As a building, the now-shuttered Binghamton State Hospital is renowned for its imposing Gothic Revival architecture and its place in history as the New York State Inebriate Asylum — the first institution built to treat alcoholism as a mental disorder.

The facts are well-documented. The stories of the people who lived there are not.

In 2015, when Assistant Professor of Theatre Elizabeth Mozer was given a tour of the building, she had a visceral reaction to the place that is known colloquially as “the Castle.”

The New York State Inebriate Asylum was designed by renowned architect Isaac G. Perry; construction was completed in 1864. By 1879, focus shifted to treatment of the “chronically insane,” and in 1890, the facility was renamed the Binghamton State Hospital. It was closed in 1993 because of safety concerns. The building is on the campus of the Greater Binghamton Health Center, and efforts are underway to rehabilitate it for future use. Stewardship of the building was given to Binghamton University in 2015.

“I really could feel the lives that had lived there, and I was moved by this palpable sense of history, along with the grand architecture of the building and the peeling paint. The combination was pretty compelling,” she says.

Then the tour guide told her the story of Agnes — of a fire, a child and decades lost to a lie. In an instant, Mozer knew she had to bring the story to the stage.

The result was a one-woman show of an original work called The Asylum Project, which Mozer performed at Binghamton University and beyond. In it, she played five different people, all based on real patients from the hospital, including Agnes. There were no scene changes, no costume changes; she relied on different voices, accents and mannerisms.

“I looked for unique ways of looking at asylum life. I’m not a historian; I look for stories,” she says. “It was physically and emotionally draining, and technically difficult.”

This spring, she’s turning The Asylum Project into an original mainstage production called Castle on the Hill.

So many stories to tell 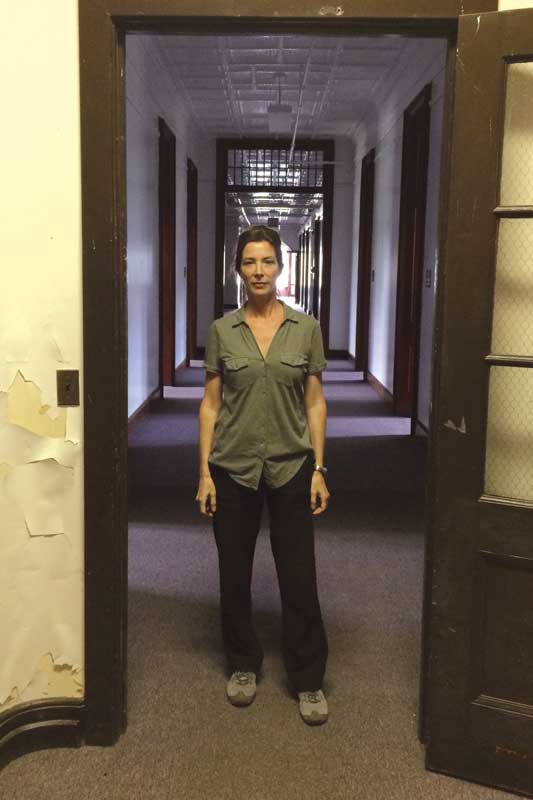 Mozer has pored over the history of the Binghamton State Hospital, which has been named a National Historic Landmark. She’s researched psychiatric care from 1880 to 1980 and how treatments for mental illness, along with society’s relationship to mental illness, have changed. The research is “consuming,” she says.

But to bring the Castle’s inhabitants to life, she needed to know their stories.

There are a few books written by and about employees of the Castle; still fewer about the people who lived there. There are snippets of letters, census records and newspaper articles that offer glimpses of patients. In 2014, more than 5,000 glass negatives — mostly images of patients — were discovered in the attic.

But it was the interviews with people connected to the Binghamton State Hospital that gave both plays the heart and soul that Mozer was looking for. Contacts came mostly by word of mouth. She would be told, “You should talk to …” and she did.

“So many people in our community have connections to the Binghamton State Hospital. And it’s been a thrill for me to talk to people about their experiences there.

“I saw so many stories I could tell. I wanted to shy away from electroshock therapy. I was interested in the stories we don’t know, that we haven’t heard, local people who worked there, were patients there,” Mozer says.

“Many of the stories I encountered had an element of heroics, in that people had to deal with such difficult situations, and many of them found ways to stay truthful to themselves as much as they could, to hold on to their sense of identity and humanity,” she says.

“But I’m not a documentarian. I digest it, add my imagination and create.”

Castle on the Hill is an expansion of The Asylum Project — it has more characters — and it is devised theater, meaning much of the play is co-created in rehearsal with the ensemble cast.

“Students will be very involved in creating content and form,” she says. Pieces will be cut or moved as needed.

“No, it’s quite daring and scary,” she says. “We’ll be creating content through improvisation, working from a sense of character, a sense of time and place. Part of my job is to create an environment for the actors to do that, to create an environment where the actors are truly connected — heart, mind, soul and body — so that they can respond truthfully in a moment and within a sense of character.”

This isn’t the first time Mozer has written a devised piece based on historical events. She has done a smaller piece based on actual accounts of people who had experienced radiation poisoning both in the United States and Japan; the former from atomic testing and the latter from the bombings of Nagasaki and Hiroshima.

Castle on the Hill will be performed April 27–May 6 in Watters Theater, written and directed by Elizabeth Mozer with students cast in all the roles.

Yet, she insists she is not a playwright.

“I am a writer of performance, using physical and verbal text and informed by these true stories, woven together with my imagination,” she says. “I want to embrace the integrity of the person’s circumstances in life and reimagine it for the stage.”

Because theater is a live event, there is something that transpires between audience and actors that allows for a deep connection, Mozer says.

“The stories we can share via theater can shift consciousness in a singular way because we’re all together at the same time.”

“I’m not looking to judge the choices of yesterday but to allow voices to resonate so that we can understand, in present time, how these voices continue to shape our relationship to mental illness.”