San Francisco area alumni pitched in to help the SF Marin Food Bank during the Alumni Global Day of Service in 2016. 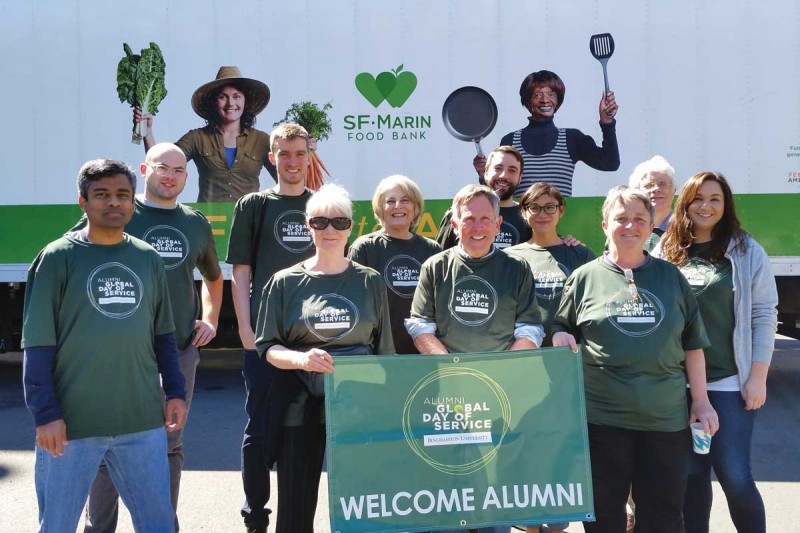 San Francisco area alumni pitched in to help the SF Marin Food Bank during the Alumni Global Day of Service in 2016.
By Steve Seepersaud

Once a New Yorker, always a New Yorker. Rich Kolber ’83 was a senior at Binghamton University when his family moved from Nassau County to the Los Angeles area. After he graduated, he followed them to the left coast and felt more at home after attending Binghamton alumni events.

“I’d tell people [in California] I went to Binghamton, and they’d say, ‘Huh,’” says Kolber, who practices business and real estate law in Los Angeles. “So it was great to meet other alumni who had the same experiences as me. I was shocked at how many Binghamton alumni there were, and this was a long time ago.”

As Binghamton has grown, so has the alumni presence in California, with nearly 1,600 in and around Los Angeles and almost 2,000 in the San Francisco Bay area. The Alumni Association relaunched chapters in both regions, creating opportunities for Binghamton grads to connect.

Elliot Alyeshmerni ’06, MBA ’07, was working as a consultant in New York when he decided he needed a change. He interviewed at Google in Manhattan, then learned the company’s Silicon Valley home base offered more opportunities. It wasn’t just a change, it was a big change.

“I found out about an alumni event in Palo Alto, close to where I work, so I went,” Alyeshmerni says. “I got involved with the chapter because I wanted to help people make the transition to another city much easier.”

It wasn’t the only transition he’d make. After a few years at Google, Alyeshmerni moved to Los Angeles to become a senior finance manager at Snap. Having moved to Southern California, he has seen firsthand the growing presence and reputation for Binghamton on both ends of the state.

“Throughout my time in San Francisco, I was excited to see more Binghamton alumni joining Google,” says Alyeshmerni, who has a leadership role with the Los Angeles Chapter. “Binghamton is becoming well known, even on the West Coast, as a school with really smart people who wind up at great companies doing great things.”

“I got involved with organizing events to help the Binghamton brand grow into something more well-known,” Kolber says. “Our alumni network had a few starts and stops over the years, and it’s great we have younger leadership keeping the group going.”