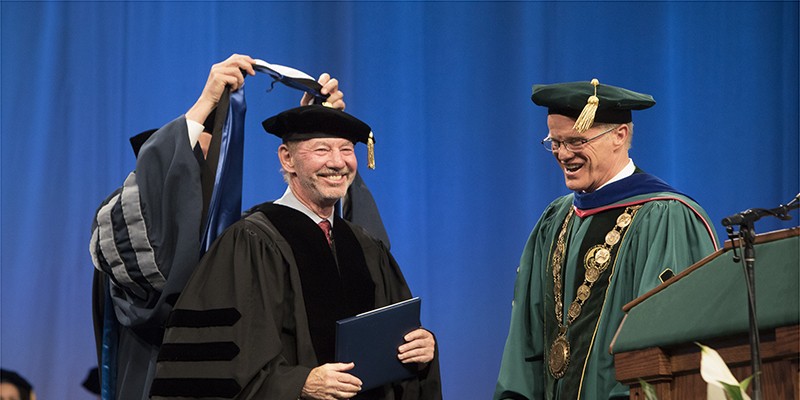 Three alumni will receive honorary degrees at the 2018 Graduate School Commencement ceremony at 4 p.m. Friday, May 18, in the Events Center. Here, Tony Kornheiser '70, is shown receiving his honorary degree in 2017. Photography: Jonathan Cohen.
By Katie Ellis

Three alumni will receive honorary degrees during Binghamton University’s Graduate School Commencement ceremony at 4 p.m. Friday, May 18, in the Events Center on campus. Aaron Mair ’84, one of the founders of the environmental justice movement; and Ali Çarkoğlu, PhD ’94, professor, higher education administrator, political commentator and pathbreaker, will each be awarded the Doctor of Humane Letters. Asunción “Sunny” Cummings Hostin ’90, former federal prosecutor, columnist, social commentator and multi-platform journalist will be awarded the Doctor of Laws.

Currently dean of the College of Administrative Sciences and Economics and professor of international relations at Koç University in Istanbul, he is among the most prominent and accomplished political scientists in Turkey.

His work has led to a more comprehensive understanding of Turkey’s political evolution over the past 30 years, and has examined critical elements of Turkey’s development as a nation, including the growth of philanthropy and civil society, the establishment of democratic traditions, the rise of conservatism in Turkish politics, and the role of local and central governments in policy making and political Islam.

Collaboration between Binghamton and Turkish universities has been made stronger with Çarkoğlu playing a vital role as a key faculty liaison in stimulating interest at critical early stages of setting up and organizing the dual-diploma program in Global and International Affairs. He remains a research partner with Michael McDonald, professor of political science and director of Binghamton University’s Center on Democratic Performance; with David Campbell, associate professor of public administration; and in cooperation with A. Serdar Atav, professor of health policy and research in the Decker School of Nursing.

Currently the senior legal correspondent and analyst for ABC News and co-host since 2016 of ABC Daytime’s morning show The View, she has been an assistant U.S. attorney in the District of Columbia, specializing in child sex crimes, and was also a managing director of Business Intelligence and Investigations at Kroll, the world’s leading risk-consulting company.

She also has been a legal analyst for CNN, appearing on several of its shows. In 2008, she was named to Crain’s 40 Under 40 New York’s Rising Stars list and is the recipient of the Alvin McKenna Alumnus of the Year Award from Notre Dame Law School.

Hostin serves on the Harpur Advisory Council and has been the featured speaker for the Alumni Association Special Recognition Awards Ceremony, a panelist during the 2015 Metro Career Night and a speaker for the 2015 student-organized TEDxBinghamtonUniversity conference, speaking on “Three Stages of Discovering One’s Purpose in Life: A Possibility Model.”

Hostin lives with her husband, orthopedic surgeon Dr. Emmanuel Hostin, and her son and daughter, in Westchester County, N.Y. She and her husband are part owners of Alvin & Friends Restaurant in New Rochelle, N.Y., which serves contemporary cuisine with Southern and Caribbean flavors.

Mair
Aaron Mair, one of the founders of the environmental justice movement, graduated from Binghamton University in 1984 with a bachelor’s degree in history and sociology. He also earned a certificate in Southwest Asia and North Africa Studies. He attended the Naval Education and Training Center in Rhode Island and the American University in Cairo, Egypt, and completed doctoral work at Binghamton University in political science, with the exception of a dissertation.

He is an epidemiological-spatial analyst with the New York State Department of Health, and an ad-hoc public health community disaster responder, including for the World Trade Center disaster.

In May 2015, he was elected the 57th president of the national Sierra Club, one of the largest and most effective environmental organizations in the world, by its more than 1.3 million members. He is the first African-American to hold the position.

Mair made an inspiring visit to campus in October 2016, explaining that he wanted students to understand that Binghamton University is where he learned the critical thinking, arguing and communication skills that positioned him for his role as an environmental justice pioneer. He also made a point to visit the Educational Opportunity Program (EOP), which had given him the opportunity to attend college.

For the complete schedule of ceremonies, visit the Binghamton University Commencement website.