Lauren Kelemen will receive her bachelor's degree in industrial and systems engineering on Saturday, May 19, 2018. 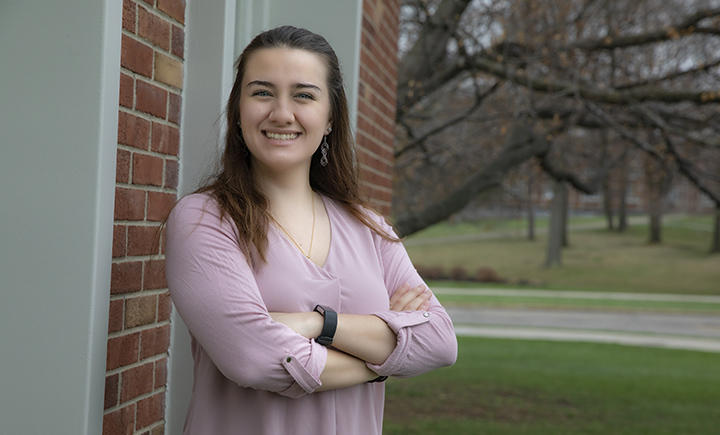 Lauren Kelemen will receive her bachelor's degree in industrial and systems engineering on Saturday, May 19, 2018.
By Rachael Flores

When Lauren Kelemen was a senior in high school, she knew she wanted to go to college outside of New York state – anywhere would do, as long as it wasn’t in New York. She had been so sure of what she wanted… until she made a visit to Binghamton University.

“I’m from Hopewell Junction which is near Poughkeepsie. My mother and grandmother told me, ‘You’re going to apply to at least one SUNY school, you don’t get a say in the matter,’ so I decided to apply to Binghamton. They dragged me to campus on a really gray, cloudy day and I was just miserable. I was convinced nothing could change my mind,” said Kelemen.

When I walked out of the admissions building, the clouds had cleared and the sun was shining! That’s when I knew Binghamton was it for me.

Then, she walked into the Binghamton University admissions building.

“It wasn’t the beautiful building that we have today but I met a transfer student there who was so positive and nice. I wanted to be her best friend! She turned the whole day around. And I kid you not when I walked out of the admissions building, the clouds had cleared and the sun was shining! That’s when I knew Binghamton was it for me.”

Kelemen now tells this same story to the prospective students that she meets as a campus tour guide, a position she’s held since she was a sophomore.

“It’s pretty cool that I’m able to pay that experience forward and share my love for Binghamton with all these people. Sometimes, when I’m walking around campus, I’ll run into people who tell me that I’m the reason they decided to come to Binghamton!”

Spend a few minutes with Kelemen and it’s easy to understand why. She’s effervescent and approachable but also the type of person to probably approach you first.

“When I was a freshman living in Dickinson, I would be sitting in my room and if I saw someone walk by four times I would usually just say, ‘Hey, who are you? We should probably know each other by now!’”

Like all engineering freshman in the Watson School, Kelemen was enrolled in the Engineering and Design Division to help her decide which engineering field would be her major.

“Originally, when I was growing up, I didn’t know much about industrial engineering. I was more raised to be interested in mechanical engineering, but I did not like physics. For whatever reason, the theory was fine but applied physics just never clicked,” she said.

“But in the Engineering and Design Division, all these different professors come talk to your class and tell you about their research. I was just really interested in everything that was going on in the industrial and systems engineering program! I found out I could do so many different things with that major, too; I could go into business or be a consultant. I was sold.”

Since declaring her major, Kelemen has been heavily involved in the Binghamton University chapter of the Institute of Industrial and Systems Engineers (IISE) and will be attending the IISE Annual Conference as well as competing as a finalist in the IISE/Rockwell Undergraduate Student Simulation Competition in May.

She might not be the first person you think of when picturing an industrial and system engineering major, but she said she’s used to breaking those boundaries.

“People tend to ask me what it’s like being a woman in engineering, but I played the trombone in high school so I’m already used to being around guys more. It’s fairly easy for me,” she explained.

If you had asked me back in March, I would have been anxious like other graduating seniors, but this week has actually been really great. I recently accepted an offer to work at Disney. It’s a dream job for me!

Now that graduation is just around the corner, Kelemen is working on what will happen next.

“If you had asked me back in March, I would have been anxious like other graduating seniors, but this week has actually been really great. I recently accepted an offer to work at Disney. It’s a dream job for me!”

Kelemen will be an associate systems engineer for Disney at the New York City location. No matter where things take her though, she’ll be sure to share what she loves about Binghamton University with everyone she meets.

“For me, it’s not something I can sum up in words but it’s more of the feeling and the environment. I’m not going to lie, I’ve been stressed. School is very stressful, but at the end of the day, I very much enjoy being here and being connected to the people.”