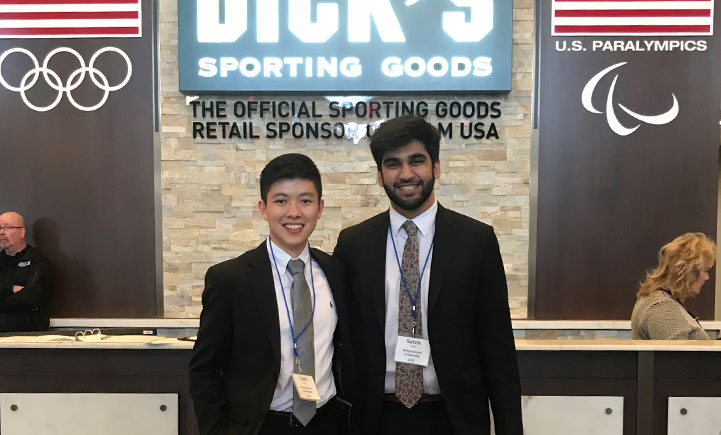 Satvik Sethi’s time at Binghamton University has helped him in a number of ways. Even in trivia.

It was March 2018, and Sethi and his teammate, Caleb Jiang, were in Pittsburgh to compete in the Pitt Business Analytics Case Competition, an analytics-driven business-strategy challenge. While the two sophomores were there to compete against some of the best business schools in the country, they also found themselves competing in a side round of trivia.

“They asked us where the first Dick’s Sporting Goods store was opened,” Sethi said, laughing. “And we were the only team that knew it — Binghamton!”

The team won a gift card, but it wasn’t the only thing Sethi was proud of from that weekend. The Binghamton University team came in fourth place in the challenge, which was the first national data analytics-based competition the School of Management (SOM) has competed in.

The whole experience kind of came out of nowhere for Sethi and his teammates, Jiang and senior Amanda Nussbaum.

“We found out about the competition just a few days before the deliverables for the first round were due” Sethi said. “A few sleepless nights and multiple cans of Monster energy drinks later, we submitted our final presentation just in time.”

The first round involved a case study that had participants analyze data from Dick’s Sporting Goods, the corporate sponsor of the challenge, and submit recommendations. Around 40 schools entered, and Binghamton University’s team was selected as one of eight to compete in the finals in Pittsburgh.

The finals consisted of two rounds. The first involved a case that teams were given two weeks in advance to work on. The second puts teams on the spot, only giving them one hour to analyze a case before making their recommendations to the judges.

The team was sent a huge collection of data with over 30,000 entries for the first finals round. Based on the data, they were asked to give recommendations about which basketball brands Dick’s Sporting Goods should display during the next holiday season.

“Because it’s a subject explored more in upperclass-level courses, none of us really had much of a background in data analytics,” Sethi said. “It was a lot of learning on the fly, but it was an incredibly educational experience.”

Sethi said the team had support from School of Management faculty and students, who helped get them up to speed with practices in data analytics over the course of two weeks. And before they knew it, they were on their way to Pittsburgh to present to a panel of Dick’s Sporting Goods executives at the company’s headquarters.

“At the school level, you usually know the judges of case competitions, because they are often students or faculty. But on a national level? You don’t know these judges, and you have no idea what to expect,” Sethi said.

Getting through the first finals round put the team a little more at ease. But they knew that the uncertainty of the second finals round was going to be a huge challenge.

“You really can’t be prepared for the specifics of whatever case they’d give us, but, in a broader sense, you can be prepared with strategies. Staying updated on what’s going on in the world helps. Reading online blogs and articles — all of these things help you develop strategies that you can bring into the case competition and utilize no matter what the specific case is,” Sethi said.

These strategies have helped Sethi and Jiang through a successful run of case competitions at the school level. The two have teamed up since freshman year, and have won every competition they competed in during the past school year. But this competition, Sethi’s 14th and Jiang’s 11th, was the first time they were competing at a national level.

With only an hour to prepare, they were asked to determine how many basketballs Dick’s Sporting Goods sold in the past year, six months and yesterday. The team came to their final answers by comparing total U.S. basketball sales to Dick’s market share, resulting in a number that company executives said was only 10 percent off the actual number.

“We feel like we put everything we learned about case competition and data analytics on the line at that moment, and we were the closest team to the real numbers,” Sethi said.

And while they didn’t win the overall challenge, Sethi is still very proud of their fourth-place showing.

“Binghamton has consistently shown that other schools may be bigger or higher up in the rankings, but that doesn’t hold us back. The students and faculty are so hardworking and dedicated, and we have the results to show for it,” he said.

Being able to compete in national challenges like this is just one of the many opportunities the School of Management provides its students, Sethi said, and if given the chance, he’d love to take part in next year’s challenge.

“Case competitions are a perfect outlet to take everything I’ve learned in class and use it in a practical way. They are one of the best ways to learn.”