From Afghanistan to Binghamton, CCPA student has had a journey of learning and unlearning 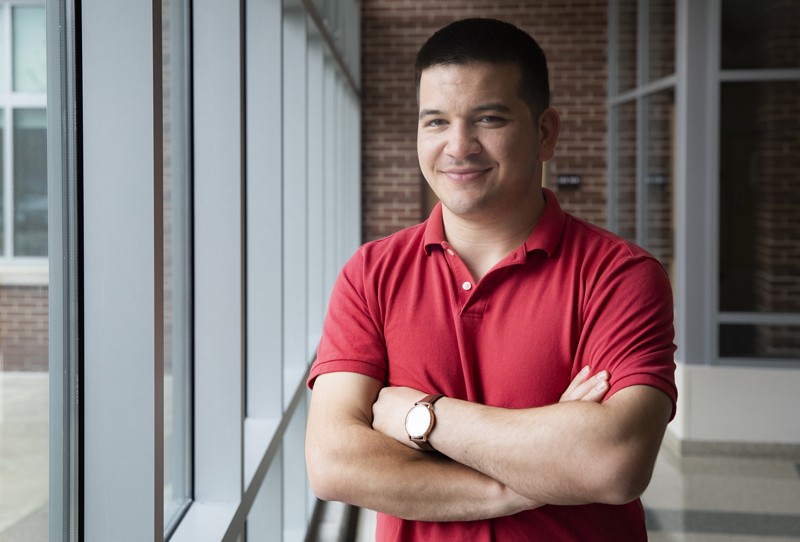 Abdul Waheed Ahmad chose to attend Binghamton University and the College of Community and Public Affairs as a Fulbright scholar. Photography: Jonathan Cohen.
By Lisa Havtur

Abdul Waheed Ahmad of Afghanistan had never been to New York, let alone the United States, but he didn’t hesitate to select Binghamton University from among the four academic destinations he was offered as a new Fulbright scholar.

Ahmad was interested in government policy and rule of law through his work in the Afghan government, so the master’s program in public administration at the University’s College of Community and Public Affairs was a great fit. Decision made.

But when he arrived in downtown Binghamton in August 2016, Ahmad instantly recognized that upstate New York was not “that” New York. “When I first came and saw the town, I was a little bit disappointed,” he said.

Ahmad was not the first to believe that any reference to New York is synonymous with New York City — and he had been envisioning a big city to call home for his two-year visit to America.

But that perspective quickly changed. A tour of the Binghamton and Vestal campuses, combined with the arrival of incoming students and faculty, soon erased any traces of doubt Ahmad may have had about his new home. And visits to New York City on weekends gave him a best-of-both-worlds option.

Ahmad wasn’t on campus long before he understood how generous the professors and staff were with their time — they were always ready to offer help and guidance.

He was also surprised, and comforted, to find a good selection of books in his native language, Farsi, on the Glenn G. Bartle Library shelves. When he needed a book the library didn’t have, a library staff member had it sent to him from London. It’s a service Ahmad still remains grateful for, two years later.

Ahmad quickly made new friends and now enjoys a large network in Binghamton. They hang out and sometimes play chess. But he also enjoys reading fiction. “That sense of being taken to a different place,” Ahmad says, “helps me escape the reality of living in a turbulent world.”

“When I first came to the U.S.,” Ahmad said, “I named the experience a ‘journey of learning and unlearning.’ My plan was to learn as much as I could in two years. But in the meantime, be open to unlearning some things I had been taught but that were wrong — to unlearn any bad habits.”

One thing he needed to unlearn was the idea that America is the land of perfection. “There is a tendency for those outside of the U.S. to think things must be perfect there. For example, the airlines. I thought the airlines would handle everything perfectly, but I was wrong,” he said. “On the first day of arrival, one of the airlines lost one of my bags. From small things like that to bigger things, I started to unlearn at Binghamton University, in a good way.”

Ahmad intends to learn how to be more productive. “The U.S. is a very hardworking nation. I see classmates having two or three jobs, but also studying and attending school. To see such hard work on a daily basis is a motivating and inspiring part of my journey,” he said.

Ahmad has also discovered that people in the United States are supportive of each other. “For example, giving people a ride [to a store] feels like a very American thing” he said. “So is giving advice — where to shop for groceries, what kind of cooking pan to buy at Walmart — everyday things. I appreciated and learned a lot from day-to-day interactions like that.”

Living under the Taliban

Alongside the other children in his community, Ahmad grew up in an uncertain time in Afghanistan. On one side was the Taliban regime and, on the other, the opposition group. His hometown was controlled by both factions, but his family’s home fell under the Taliban’s control. Effects of that included a ban on some educational subjects, like biology and chemistry. Girls were not allowed to attend school, and boys who did were required to wear a turban.

All that changed with 9/11. When the Taliban was attacked after failing to comply with ultimatums, they were suddenly gone. Smiling, Ahmad added, “Also suddenly gone was the turban requirement for boys, who were now free to wear jeans to school.”

With the Taliban gone, women in Afghanistan were given a door to mainstream society — although not all conservatives have been on board with this new perspective. “Afghanistan women are brave women, constantly fighting the status quo. As a male member of the Afghan society, I have to say they are a source of inspiration for me,” Ahmad said.

Once the Taliban was driven out, people became involved in civic activities. With help from nonprofit organizations, Ahmad and his classmates established a new radio station, the second in the community. One goal was to provide women in Afghanistan with a greater voice in the province, a voice not heard on the original radio station’s broadcasts. Another goal was to provide people an alternate source of news so they no longer had to receive it from a single, conservative voice unless that was an intentional selection.

“The great thing about this,” Ahmad said, “is that no one has ownership of the new radio station’s activities. I’ve been long gone, as have many of the other boys who helped in its creation, but the radio station is still there for the community.”

Ahmad has spoken with his fellow students in the public administration master’s program about the radio station and other experiences in Afghanistan.

David Campbell, associate professor of public administration, said “Ahmad’s presentation in my nonprofits class about starting and working to sustain a student-run radio station in Afghanistan was an eye-opening and powerful introduction to what changemaking looks like in other countries. Ahmad’s experiences always added value and challenged our students, in the best ways.”

Ahmad said he is grateful to have a “huge” network of mentors — people who have supported and advised him inside and outside of Binghamton University. It was the guidance of students and faculty at Binghamton, he said, that helped him make the most of his experience as a Fulbright scholar.

Nadia Rubaii, professor and chair of the Department of Public Administration, has worked closely with Ahmad during his time at Binghamton. “At its most basic level, the Fulbright program allows bright students from around the world to pursue advanced education in the United States. Some students come, get their degrees and go home with the benefit of the education and their personal experience to guide them in their future endeavors. Others do much more. Ahmad epitomizes the Fulbright program at its full potential and what it is intended to accomplish.”

“Ahmad made use of his time at Binghamton to learn about the varied cultures and perspectives of the countries represented by other Fulbright student scholars and other international students,” Rubaii said. “He also deliberately and effectively contributed to enhancing our understanding of Afghanistan through a variety of outlets, including having his essays published in prominent outlets read by policymakers.”

“His legacy in spearheading the University’s Fulbright Association as a mechanism for facilitating intercultural exchange among faculty and students will be felt for years to come,” she predicted.

Although he has no aspirations to become a professional writer, Ahmad appreciates the value of writing as a communication tool for sharing his ideas, something he plans to continue. He has written and published articles in The National Interest, The Diplomat, The Hill and War on the Rocks. His writing is primarily commentary, with a focus on policy.

Long term, Ahmad said, “I want to keep this momentum going. I can see myself continuing my education, perhaps going back for a PhD at some point.”

His immediate plan, however, is to return to Afghanistan, where his family is. He said there are not many in his home country who have college degrees, and he believes his new master’s degree in public administration will definitely help him in his search for policy-related work in the Afghanistan government.

That’s a goal that sits well with Rubaii.

“I am more optimistic for the future of Afghanistan knowing that Ahmad and others like him will be among the future leaders,” she said.