Frank Frear, an employee for the University's Transportation and Parking Services, will receive his bachelor's degree in history. Image Credit: Jonathan Cohen. 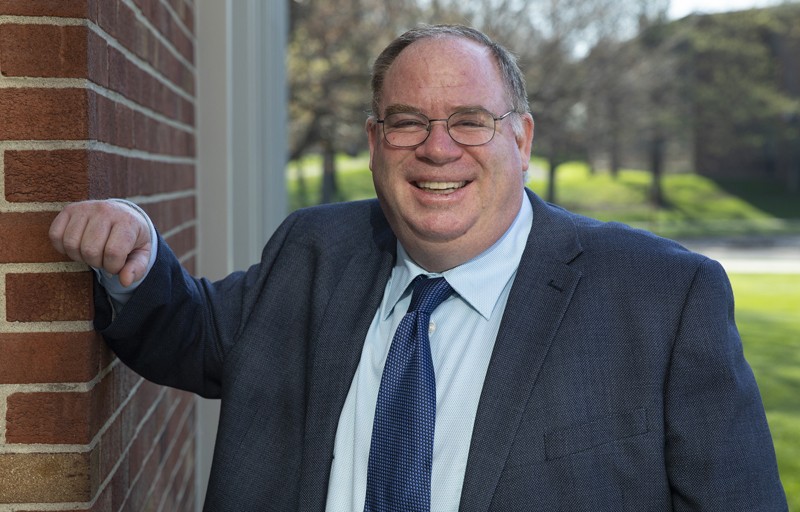 Frank Frear, an employee for the University's Transportation and Parking Services, will receive his bachelor's degree in history. Photography: Jonathan Cohen.
By Eric Coker

As Binghamton University’s senior parking attendant for events, Frank Frear is on duty every Commencement weekend, ensuring that vehicles are moving easily around the Events Center.

But on the afternoon of Sunday, May 20, the only traffic pattern that Frear needs to concern himself with is the procession of his fellow Harpur College of Arts and Sciences students inside the Events Center. Frear, a 21-year University employee, will receive his bachelor’s degree in history at the second Harpur ceremony of the day.

“Sunday will be weird for me,” Frear admitted. “I’ll probably be thinking about what’s going on outside. It will be hard to separate myself for a couple of hours and not worry about (the parking).”

Frear, who turns 50 in June, has worked toward the degree for the past seven years. His love of presidential history began as a boy when his family would visit Washington, D.C., during vacations.

“I remember going to the White House for the first time,” he said. “President Carter was in office. I said to an agent: ‘Tell the president I said hello.’ I later shared that story with President Carter.”

As an adult, Frear got to speak with Carter thanks to a historian who knows the former president. Carter discussed speaking at Union College in Albany and fly-fishing in Wilkes-Barre, Pa. He is one of four presidents Frear has met, along with Bill Clinton, George W. Bush and Barack Obama. Frear also saw Ronald Reagan when he visited Endicott in 1984.

When not working and studying at Binghamton University, Frear serves as a guide and a board member at the historic Phelps Mansion Museum in downtown Binghamton.

Frear once thought his second career would be as a funeral director. With the encouragement of wife Jeanne, he received his associate degree from the Simmons School of Mortuary Science in Syracuse in 2006.

“History always seemed to be where my heart was,” he said.

With the continued support of his wife and her family, Frear enrolled at Binghamton University and took eight credits a year while working on campus. He eventually expanded his course load into winter and summer classes.

“I love doing research,” he said. “I like digging through the archives and letters. I study how the presidents were raised and why they thought the way they did.”

Frear credited Diane Miller Sommerville, an associate professor of history, and former history teaching assistant Kevin Murphy for their longtime support. He also praised the backing and flexible scheduling that he received from Transportation and Parking Services.

Sommerville called Frear “one of the most innately curious and interested students I’ve ever had.”

“We’ve sat over coffee and talked about topics as wide-ranging as slavery and baseball and George F. Johnson, one of the leading businessmen in Binghamton’s history,” she said. “His idea of a vacation day is driving to Syracuse University and spending the day in the archives. Beyond his dedication to history, he’s fiercely devoted to the University. I was very lucky to have him in the classroom and am honored to call him friend.”

Two other mentors to Frear were Binghamton business titans Ferris and George Akel. Frear worked for them through high school at their Giant Food Market in Johnson City.

“Besides my father, I learned my hard work and dedication from them,” Frear said. “I watched them and molded my work ethic after them. As a young kid working for them, they would never ask us to do anything they weren’t doing. I saw them packing bags, mopping floors, shoveling snow and washing shopping carts.”

The brothers and Frear reconnected later in life at University events. The Akels encouraged Frear to proceed with his education — and the support from Ferris Akel continued until his death in May 2017.

“When the time came, I got in touch with George and he said: ‘I wouldn’t miss your graduation for the world,’” Frear recalled, his voice shaking with emotion. “I never dreamed I would get a degree from Binghamton University and that George Akel would be sitting there. I feel bad that Ferris won’t be there, but I told George that he’s up there looking down and he knows that I did it.”

Frear said he can see himself working someday as a historian at the National Archives, a tour guide for the National Park Service or as an archivist at a presidential library.

“When folks ask me where I want to end up, I tell them Missouri — at Harry Truman’s library,” he said. “It would be neat to be there all day doing research for people.”

The bachelor’s degree, though, doesn’t mean that Frear is ready to make his Binghamton University employment a part of history.

“I love my job here,” he said. “I work with great people and enjoy the different parts of the campus. I’ve always enjoyed working during graduation. I’m in front of the Events Center guiding people around. It’s nice to see the families. I love what I do.”