Kayden Stockwell, a student on the autism spectrum, will graduate with degrees in psychology and human development. Image Credit: Jonathan Cohen. 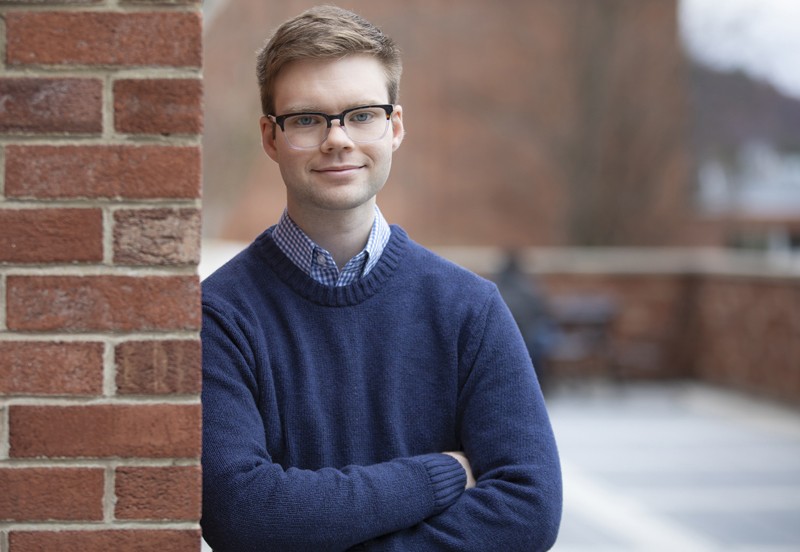 Kayden Stockwell, a student on the autism spectrum, will graduate with degrees in psychology and human development. Photography: Jonathan Cohen.
By Eric Coker

Whether it’s through research, campus programs and events or volunteer work in the community, Kayden Stockwell has been a mainstay in aiding those with disabilities.

It’s no surprise, though, as Stockwell is a student on the autism spectrum who has thrived in and out of the classroom over the past four years.

“I enjoy being deeply involved in things,” he said. “I know that I benefited from services, so I want to make sure that people know that they can also benefit from these services.”

Stockwell, who Services for Students with Disabilities Director Dianne Gray called an “amazing advocate,” will receive degrees in psychology from Harpur College on May 20, and in human development from the College of Community and Public Affairs on May 19.

The 22-year-old studies the stigmatization of college students who are on the autism spectrum. He’s been conducting research since taking part in the Freshman Research Immersion, where he examined Parkinson’s in rats.

“There’s not a lot of research about college students on the autism spectrum because for a long time people didn’t think you could go to college if you had autism,” Stockwell said. “But you can.”

“Part of it was that we have the Institute for Child Development (ICD) on campus, which is a school for kids with autism,” he said. “The major gives you an opportunity to work directly with the kids, so you get more practical experience. And my dad’s family lives on the East Coast, so I wanted to be near them for a while.”

Surprisingly, Stockwell said that he never misses the weather of his hometown.

“I hated the weather,” he said of Long Beach. “It was too hot and dry.”

Within the Psychology Department, Stockwell served as editor-in-chief of the Undergraduate Psychological Review and was president of the Student Psychological Association. The latter position enabled him to offer career development and guest speakers to undergraduate students. The former job allowed him to read research from all over the country during the summer.

“I have trouble saying no to things,” he said of his workload.

Besides his research, Stockwell has worked as a research assistant and teacher’s aide at the ICD and has helped Services for Students with Disabilities. He has also spoken at Binghamton University and other schools about disabilities and higher education.

In April, Stockwell took part in a “Disability is Diversity” fair in the University Union. The event raised awareness about the different resources and accommodations that Binghamton University offers.

“In a lot of diversity campaigns, nobody mentions disabilities,” Stockwell said. “It is a form of diversity, whether it’s a physical disability or a developmental disability; it changes the way you interact with and see the world.

“If a student on a (Binghamton University) tour sees a poster profile of someone who represents their experience, they’ll realize that the campus acknowledges their situation and how they can contribute.”

Off campus, Stockwell works with CreateABLE, a non-profit organization that offers programs to strengthen the special-needs community. He recently took photos of the Ice House Hawks, an inclusive ice hockey team in which children with various disabilities come together to learn about the sport and develop friendships with the help of community peer mentors.

Stockwell, who was diagnosed with autism at 17, said his higher-education challenges were social, as opposed to academic.

“Making a few close friends was the difference for me,” he said. “If I hadn’t had them, it would have been a bigger challenge.”

With more students on the autism spectrum going to college, Stockwell said it is important to realize that “college is a challenge for everyone.”

“You just might be challenged in different ways,” he advised. “You can do it. It’s important to be aware of what services are there for you. It’s important to develop a network of support, be it students, professors or a combination. I know I would be content to go to class and go back to my room and not see anybody. But I wouldn’t be happy doing that. It’s worth the extra effort to make social connections – and maintain them.”

He plans to spend the next year on campus serving as a lab assistant in the Psychology Department with a long-term goal of getting a doctorate in developmental or cognitive psychology and continuing his autism research.

A short-term goal is finding someone who will keep his disability-advocacy message going strong.

“If you’re a full-time student with a disability, you may not have the energy to take on additional advocacy responsibilities,” he said. “It can be exhausting confronting a system that doesn’t always fit with you. It can be a challenge finding students who want to jump into that.”

Attending Binghamton University has been more than a climate change for Stockwell.

“I’ve loved being at Binghamton,” he said. “It was the right school for me. I learned how to be myself and be OK with that. I was able to go further in-depth with my interests and find a community of people who were interested in looking at things from a different perspective.”