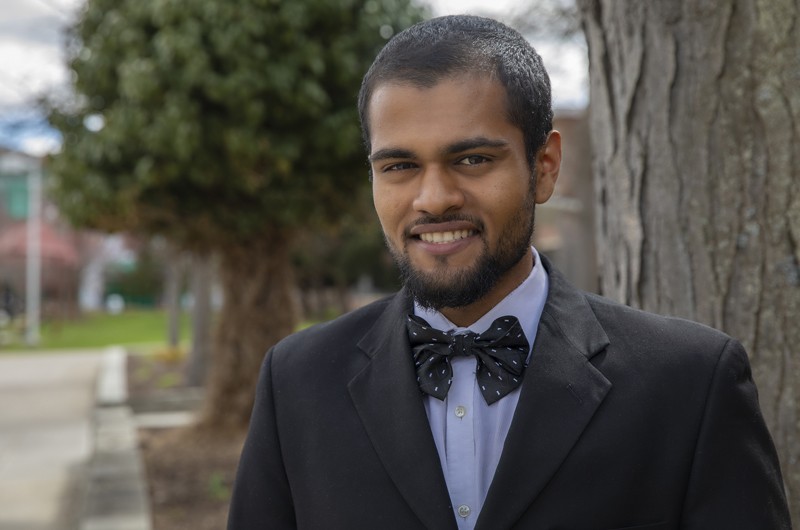 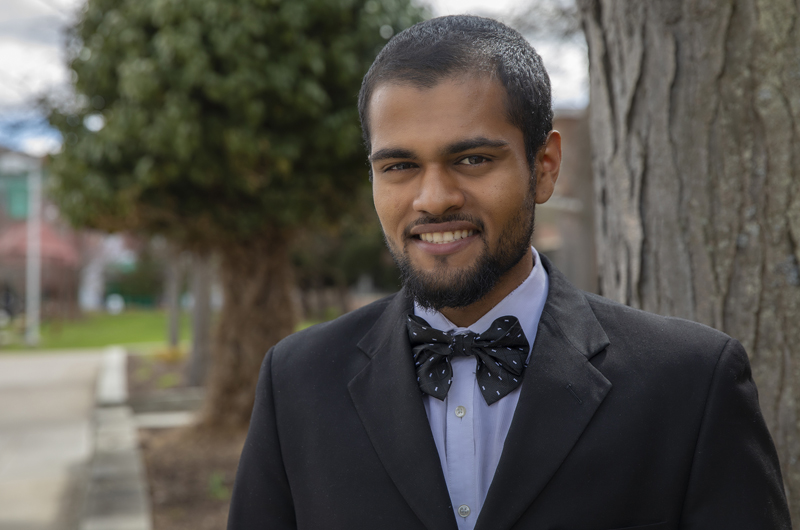 Ray Sukhu has overcome early community-college struggles and the loss of central vision in his eye. Image Credit: Jonathan Cohen.
By Eric Coker

A random encounter with a community-college classmate led Ray Sukhu to a place he had never heard of before: Binghamton University.

“We sat down in the cafeteria and she asked me about my (future) plans,” Sukhu said as he recalled the conversation at the Borough of Manhattan Community College. “I said: ‘I don’t know. Maybe I will get into City College.’ She told me she was applying to SUNY schools – and one of them was Binghamton. I pronounced it wrong: Birmingham! Then she told me: ‘The application deadline is today’ and I replied: ‘OK! Tell me more about SUNY.’”

Sukhu beat the deadline and was accepted at four schools, including Binghamton University.

“A week before classes started, I packed my suitcase and got on a bus,” he said. “If I hadn’t run into (the classmate), I wouldn’t be at Binghamton.”

Upon arrival in the fall of 2015, Sukhu was impressed by the size of the campus and admitted that he briefly walked around the “Brain” before realizing that he could use the pathways in the middle of campus to get to buildings.

The travel lesson is just one of many obstacles Sukhu overcame on his Binghamton University journey. The journey of the 23-year-old, who moved to the United States from Guyana at age 10, grew up in low-income housing in New York City and lost the central vision in his right eye, will culminate in a bachelor’s degree in biology on May 20.

“You need to be on your game at Binghamton to come through and say ‘I did it,’” he said. “A lot of people don’t get this experience.”

Sukhu and his parents were living a “peaceful Caribbean life” when they moved to America for better employment opportunities. The family, along with two cousins and their parents, slept on the floor of his grandmother’s one-room apartment.

“We did that for six months,” he said. “It was the ultimate sleepover!”

The family later moved to a roach-filled basement apartment in a rough New York City neighborhood. As a teen, Suku traveled two hours to a Catholic high school in Queens.

“I got used to doing my homework on the bus,” he said. “When I came to Binghamton, I thought: ‘There’s nothing moving. I have to sit still and study?’ But I got used to it.”

In his first semester of community college, Sukhu became overwhelmed and dropped out. After taking part in a Harlem work readiness program, Sukhu decided to give education another try. He made the dean’s list and served as a welcome ambassador at Borough of Manhattan Community College.

By this time, though, Sukhu’s vision in his right eye had deteriorated due to a parasite that attacked his retina. Doctors struggled with a diagnosis before determining that toxoplasmosis was to blame.

“It’s not correctable, because of the damage to the macula,” Sukhu said. “It made me realize how fortunate we are to see. Be grateful for what you have.”

Sukhu never treated the ailment as a disability. In fact, it inspired him to conduct microbiology research as a McNair Scholar with faculty member Claudia Marques.

“I don’t know how I long I’ll be able to see,” he said. “The doctors say it could always come back. It could transfer to the other eye. However much strength, energy and brain cells I have, I’m going to put toward my education and (helping) my family.”

Sukhu has also put his energy toward helping people on and off campus. As student manager of the University Union, he provides customer service and assistance during events. As a member of MALIK social service fraternity, he has participated in several volunteer activities, including helping to raise money to deliver water and supplies to hurricane victims in Puerto Rico.

“I love talking with people and helping people,” he said. “I wanted to do that while studying science.”

Exercise, dancing and acting are among the things that Sukhu enjoys when he is out of the classroom. He always likes to travel, having visited Canada, Italy and Costa Rica. On the day after he receives his bachelor’s degree, Sukhu will depart for a 12-day trip to India.

“I have no family there,” he said. “Nobody is going with me. I’m going by myself. Why? I want to see what the world has. I’m scared, but I have a habit of picking myself up and going wherever calls me out.”

Sukhu will return from India and prepare to join Teach for America as a biology teacher for students in grades 7-12. He will teach in the Bronx, Brooklyn or Manhattan.

“The placement is up to them,” he said. “They are going to look for a school with the most need.

“It’s going to be an adventure,” he said of the two-year commitment. “It’s a way to give back to the environment that I passed through.”

Binghamton University has prepared Sukhu for whatever adventures are ahead, he said.

“Binghamton taught me to be mentally strong,” he said. “Being away from home, being out of your comfort zone, being in a place you know nothing about – it’s challenging. And there is never an easy class. Right down to tai chi – it’s hard!”