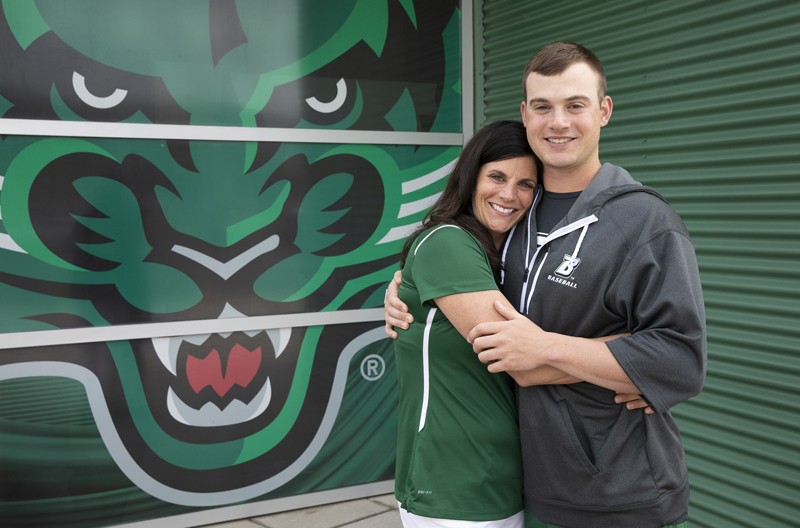 Jennifer Wegmann didn’t hesitate when deciding whether to attend her doctoral graduation ceremony or her sons’ baseball game.

“There’s not enough money in the world to make me miss their games,” said Wegmann, a health and wellness lecturer in the Decker School of Nursing. “I feel so blessed to be able to watch my boys play. I didn’t think twice about it. There’s nothing else I would rather do.”

While the rest of Binghamton University’s graduate students receive master’s or doctoral degrees on May 18, Wegmann will watch sons Nick and T.J. – and the rest of the Bearcats – play their final game of the regular season at Central Connecticut State.

But Wegmann will still get to be part of Commencement weekend. She will be on stage to greet Nick Wegmann when he receives his bachelor’s degree in psychology on May 20.

“Making my family happy is what makes me happy,” Nick Wegmann said. “I’m excited to see mom on stage and everyone there to watch me. That’s what will bring the joy to me.”

Jennifer Wegmann graduated from Binghamton University in December 1994, and began teaching at the University in fall 1995. She received her master’s degree in social sciences in 2001. Eight years ago – when Nick was an eighth-grader – she decided to pursue a doctorate.

“I wanted to test the waters to see if I wanted to go back,” she recalled. “Then it snowballed. It’s something that’s been on my bucket list and something I’ve always wanted to achieve.”

Wegmann initially thought she would focus her studies on women’s issues, body image or eating disorders. But she became intrigued about stress mindset after teaching a class on stress management four years ago.

“I got so excited about the power of our minds and how it influences our health and well-being,” she said.

She then shared the concept with Shelley Dionne, an associate professor in the School of Management, who became her mentor and advisor. Wegmann will receive a doctorate in community research and action for her dissertation: “The Moderating Effects of Stress Mindset on Well-Being.”

Managing the workloads of both an educator and student proved challenging for Wegmann.

“My everyday responsibilities didn’t go away,” she said. “There were so many nights and weekends staying up late reading and writing papers.”

The family could not help but notice the work, Nick Wegmann said.

“For us three guys,” he said, referring to himself, his father and brother, “we’d all see mom doing this extra schoolwork and think: ‘What are you doing? You had your chance to be done with it!’ But we knew she was working hard and we were proud of her.”

About 18 months ago, Jennifer Wegmann realized that she and Nick could both graduate in spring 2018.

“I didn’t think I could finish either!” Nick added.

Binghamton University was already a second home when Nick Wegmann accepted a baseball scholarship at the school. The former Vestal High School star had grown up in the West Gym and Events Center while his mother taught classes.

“When I first started my recruiting process, I set my perimeter for six hours,” he said. “I wasn’t going to go more than six hours away. I committed the day after (getting) my offer. T.J. committed 10 minutes after his offer!

“I got the best of everything and was only 15 minutes from home (in Apalachin, N.Y.). I made the right choice for sure.”

“She knew we would go where we would be happy,” he said.

“I went to school here and I was an athlete here,” Jennifer Wegmann said. “I have so much pride in this school. I’m proud to be part of this University for literally half my life. Knowing my child was coming here – my hope was that he would love it as much as I did – and do.” 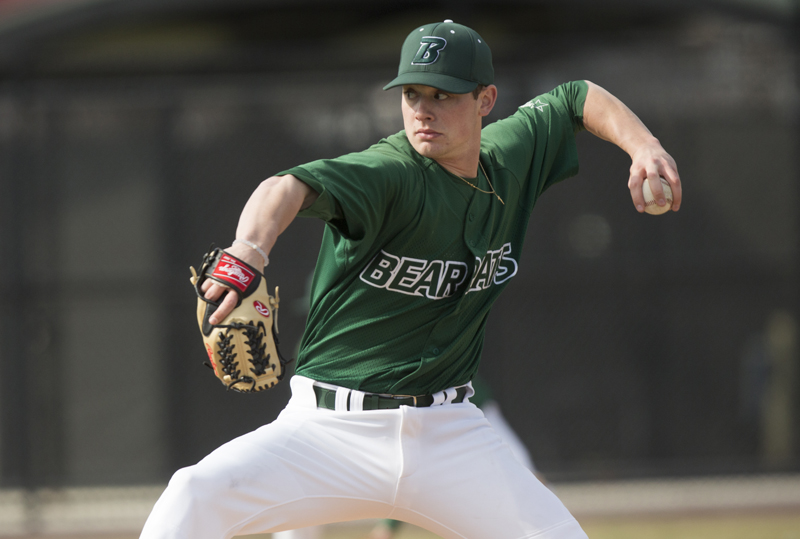 Nick Wegmann's baseball accolades include a 3.27 ERA in the 2017 season. He was named second-team All-America East. Image Credit: Jonathan Cohen.

Nick Wegmann has been an integral part of the Binghamton University baseball team over the past four years. The left-handed pitcher was part of the 2016 America East championship team that played in the Texas A&M regional. As a junior, he was a second-team all-conference selection after finishing in the top five in earned run average.

“Baseball is like having a family of 30 guys,” he said. “I realized we weren’t going to be a team, but a family. It’s a close-knit group. You come to school as a freshman with 30 new best friends immediately.”

As a student-athlete, though, Nick never offered his mother any time-management wisdom: “I don’t think she would’ve wanted my advice. I’m the worst procrastinator.”

Nick admitted that the hardest part of leaving baseball is that he will no longer be playing with a brother, a catcher for the Bearcats.

“We won’t be able to talk about who we’re playing and how we’re going to pitch guys,” he said. “That commands the conversation every time we come home. Mom loves it.”

Jennifer Wegmann praised her family, Dionne and Lisa Hrehor of health and wellness studies with providing the support to get her to a doctorate.

“When working full-time and finishing a dissertation, you need people who love you, believe in you and support you,” she said.

Nick Wegmann looked across at the table at his mentor.

“Anytime I needed a fire lit under me to do well on a test, she was the one to do it for me,” he said. “Even when she was going through her (doctoral studies), she was always there to help me when I needed it.”

Nick hopes to stay in baseball by coaching at the high school level. He said he wants to teach history or become a school counselor.

Jennifer, meanwhile, plans to do more speaking engagements and a series of podcasts about stress. She said she is eager to put more creative energy into her classes.

“I love teaching and being in the classroom,” she said. “I try to create unique opportunities for my students to learn. What new things can I do as an educator to make my classroom an engaging and exciting environment?”

But most of all, she is ecstatic about being part of Nick’s commencement.

“The amount of pride I have as a mom for Nick is overflowing,” she said. “He’s a great kid. He warms my heart. I remember this stage of my life. It’s an exciting time with so much exploration. It’s like a blank page and the world is at your beckon call. There’s nothing you can’t do.”