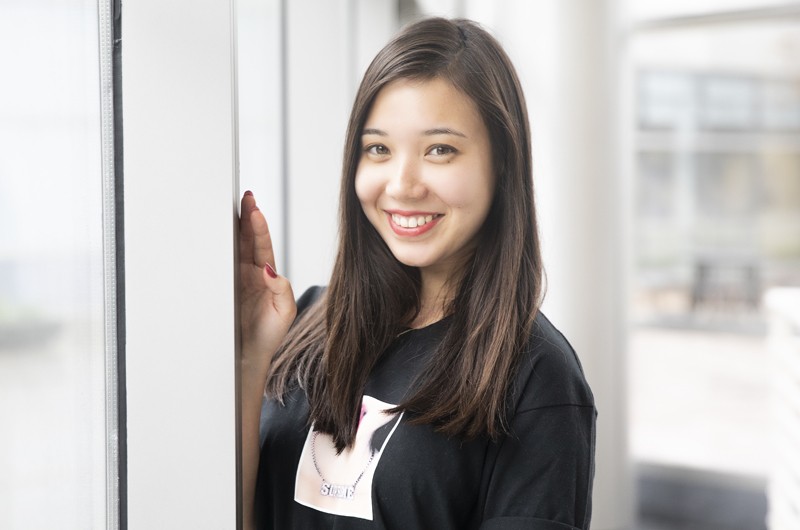 Anna Gaspar Pereira Endo, a Japanese-Brazilian student, came to the United States as someone with many homes. And over her four years, she found more at Binghamton University than she can keep track of.

Endo was born in Oxford, England, but grew up mostly in Japan. As a child, she spent a year in Italy, a year in Boston, and Italy again — until she returned to Japan for high school.

“I got really good at adapting to new places,” Endo said. “I think that’s why I learned languages. There was no way for me not to learn those languages or I wouldn’t make friends or I wouldn’t know what was going on around me.”

While growing up around the world she spoke English, Japanese, Portuguese and Italian. At 18 years old, she took on a new residence: Binghamton, N.Y.

“I’m from a big city so that was probably the biggest culture shock — settling into Binghamton,” Endo said with a laugh.

Even after facing new environments and constant change, she admitted to still getting homesick.

But instead of letting the homesickness take over, Endo said she focused on a new task each year.

“That’s why I did so much in college,” she said. “I wanted to keep myself busy and [try] to find a new challenge every year.”

The freshman-year challenge was settling into university; sophomore year was becoming a resident assistant; junior year was joining Alpha Phi Omega, a community service fraternity; and senior year was being a board member for the United Nations’ Japan Youth Platform for Sustainability.

And along the way she was president of Diverse Cultural Xcellence (DCX), a teaching assistant for an English as a Second Language class, a member of the Japanese Student Association and a human rights undergraduate fellow.

“I think I did everything that I wanted to do in Binghamton,” said Endo, who will receive her bachelor’s degree in political science. “I made a bucket list in the beginning of freshman year: becoming an RA, hiking all the way up to the Nature Preserve, becoming a TA, getting straight A’s one of the semesters. All of these little ones that I included in there — I checked them off. I’m proud of my four years.”

And with this pride came a lot of self-improvement.

According to Endo, being an RA taught her the most. But she enjoyed guiding freshmen as they settled into a new place — something she learned how to do quite well. So she made her campus community feel like a family.

“[Recently] I had my last little community builder. I had $400 left in my meal plan so I got two sheets of pizza,” she said. “I sat down and everyone came and everyone ate with me. Every little part of it makes it home.”

While trying to find a slice of home everywhere she could, Endo also assumed new identities as she visited different friends for the holiday breaks.

“Last Thanksgiving I ended up traveling around and eating different kinds of Thanksgiving home-cooked meals, so that was fun,” she said. “Every year someone else adopts me for that little break.”

“When I go to the department I always go into Olga’s room or Ekrim’s room,” she said. “The two of them have really shaped my education.”

Endo hasn’t made any big decisions for after college, but she wants to work until she finds a cause that inspires a true passion. In the short term, she has a position at MTG Co. Ltd., a brand development company for beauty products. And although the company is small and developing, Endo sees potential in its cause.

“Their whole mission is if you shine then the people around you shine and the world will shine,” she said. “I just thought it was cool that they have a strong mission that they wanted to better the world.”

For Endo, this is something she can get behind.

“I like making a small impact on all the people around me,” she said. “I think just smiling is something super powerful. If you wake up every single day and you tell someone — even if it’s a Sodexo cashier, ‘your nails look really nice,’ — that brings a little smile to that person. When they check the food for the next person, they’re probably going to be a little bit more positive. And I think this positivity is a wave.”