Alexander Van Roijen has served as a resident assistant, Student Culinary Council president and a member of Binghamton Scholars during his time on campus. Image Credit: Jonathan Cohen. 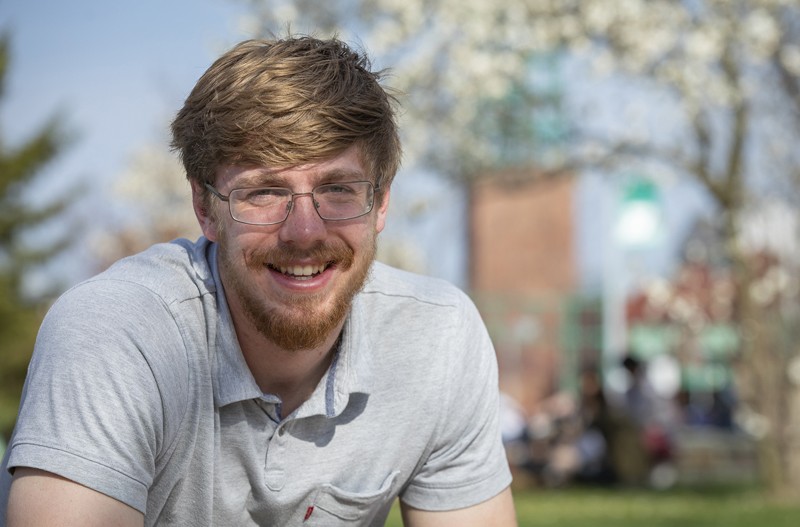 Alexander Van Roijen has served as a resident assistant, Student Culinary Council president and a member of Binghamton Scholars during his time on campus. Photography: Jonathan Cohen.
By Erica Prush

Alexander Van Roijen has one item on his bucket list: building a house.

“My grandfather did that for my family on my mom’s side. I just thought that was insanely impressive,” Van Roijen said. “You know, living spaces, you always complain about them, but if you build it you can’t complain about it. Having that kind of tie to where you live, I think having that is something very good to have.”

Van Roijen has spent the last four years building his home at Binghamton University with a similar personal touch - through making ties with as many people as he can.

A third-year resident assistant (RA) in Broome Hall of Newing College, Van Roijen is set to graduate this spring with dual degrees in math and computer science. Standing 6 feet 6 inches tall, blond, bearded, and with a booming voice, Van Roijen is hard to miss—not that he’d let you.

“I think everybody’s pretty social. People just don’t show it. You might see somebody you know and not say hey because they’re not facing you or something,” he said. “I always do. You never know what they got going on, and there are some pretty interesting stories out there.”

Van Roijen is a native of Hopewell Junction, N.Y., near Poughkeepsie, where his family moved from the Netherlands when he was in elementary school.

When Van Roijen came to Binghamton, he wasn’t exactly shy. He soon realized, however, that the personalities around him were what he was passionate about.

“In general, it’s about who you get to meet and who you get to know. By getting to know professors themselves, they provide an insight to what’s really important in the material. Similarly through your classmates, when you’re an upperclassman getting to know the underclassman,” Van Roijen said. “Everyone has a different experience, different thoughts, different ideas and passions, and being part of that is really what you’re going to enjoy and remember when you’re finishing up here and when you go further.”

School-spirited at his core, Van Roijen engages with his residents as a member of the Binghamton University Scholars Program and Learning Community and as coach of co-rec football in Broome Hall. He plays club soccer and frequents intramural games, participating in five brackets this semester alone.

He is also the president of the Student Culinary Council, where he serves as a liaison between students and campus dining. And sometimes, he is the man behind the Baxter costume.

For Van Roijen, though, the most immersive and rewarding involvement has been working as an RA.

“One thing I did this year was I went to Apple Hills with some of my residents,” Van Roijen said. “Going through those videos, it lets me reflect a little bit on the impact it made since then. Those connections that I didn’t necessarily establish but was a part of, seeing these younger students go through difficulties that I similarly had and seeing how they handle it, meet new people, make new friends, join different groups and organizations, I’m proud of it and I’m just glad to have been a part of it.”

One thing Van Roijen does to build community is send a weekly update to his current and former residents, along with friends, about events on campus, his plans for the week, and some advice here and there. Before Halloween weekend, he implored them to remain safe and mindful, and during stressful times like pledging season, he offered words of encouragement.

“I wanted to give a piece of advice that I learned recently: We’re all very valuable people here with different abilities and talents that other organizations and groups will be interested in, and you need to value that and be able to say no,” Van Roijen said. “Because you can’t do everything, even though you might want to.”

For his work within his residential community, the Binghamton University Scholars Program awarded him the Community Building Award at their banquet in late April.

One anonymous testimonial nominating him read: “Alex is like a wrecking ball of positivity blasting through campus and squeezing the breath out of my lungs in big hugs every time he sees me. A truly noble, kind, and friendly person that looks out for everyone in his Newing community, and Binghamton community at large.”

Peter Napolitano, retired director of Auxiliary Services, worked with Van Roijen on the Student Culinary Council. He said he was impressed not only by Van Roijen’s hard work, but also by his ability to mentor others.

“He managed some high-profile student events and often led by example, not only directing people to their jobs but also working alongside others at events,” Napolitano said. “He took responsibilities when things when a bit off track shouldering the blame, but sharing the credit with his peers.”

A grader in the Mathematical Sciences Department and a researcher in the Computer Science Department, Van Roijen will translate his knowledge into the master of science in data science program at the University of Washington in Seattle this fall. He said the field reflects his multi-faceted interests.

“What I see is that I’m going to end up working in a lot of different areas. There are [data science] applications in sports, civil service, social work, healthcare, employment, energy efficiency—you know, it goes everywhere,” Van Roijen said. “That’s why I’m studying it.”

After reflecting on everything he’s learned the last four years, Van Roijen applied to be a commencement speaker, but got to give his speech at a pre-commencement Thomas J. Watson School of Engineering and Applied Science event instead.

“Even when you don’t win first, there’s always something else,” Van Roijen said. “I tried to structure my speech around ‘From breadth, to depth, to perspective,’ which was, ‘from the breadth of people we meet, into the depth of our relationships, we gain a new perspective; a world view.’”

His time at Binghamton University may be ending but, bucket list aside, Van Roijen has been a homebuilder all along.

“I ran into one of my old residents yesterday, and he had some very touching words for me,” Van Roijen said. “‘Alex, I’ve really got to thank you for the first two years. You really made me feel that Binghamton was my home.’”