Group to play during prelude, processional and recessional of ceremonies 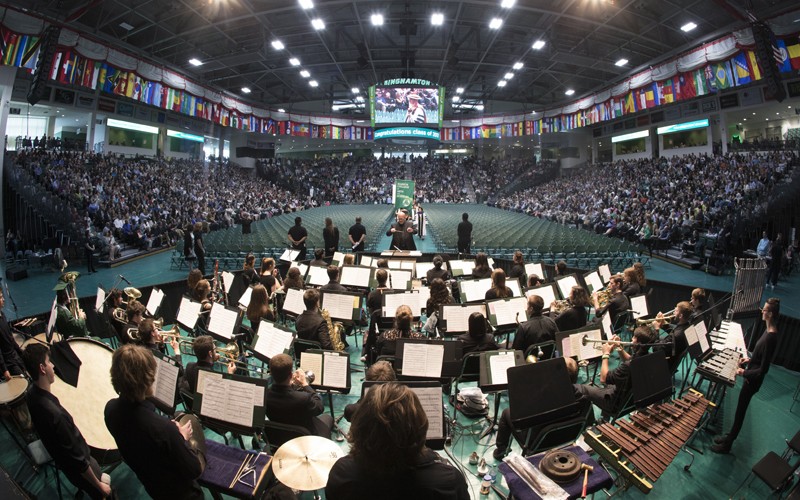 Daniel Fabricius remembers looking out at the Events Center after leading the student musicians during a Commencement ceremony for the first time in spring 2013.

“I always acknowledge the applause after we do the first tune,” said Fabricius, a music lecturer and conductor of the University Wind Symphony. “I turned around and thought: ‘Wow! This is cool. There are a lot of people here.’ That doesn’t get old. It’s a nice feeling.”

Fabricius and the student musicians are a steady presence at each Commencement ceremony, performing during the prelude, processional and recessional. They also provide the music for the national anthem, the Binghamton University alma mater and the Harpur College alma mater.

Commencement weekend (May 18-20) will be long and tiring for Fabricius and the students, but they said it is exciting to perform for the University and thousands of guests.

“I love it when there are a lot of people to hear us perform,” said Nancy Huang, a sophomore physics major from Brooklyn who plays the clarinet. “It’s always exciting. Parents have come up to us and said good things about (the performances). They appreciate that we’re playing for them.”

Fabricius said he usually has the commencement-music lineup ready in January.

“I’m always thinking about music,” he said. “There is a constant search for good music to perform at various settings.”

The students begin practicing following the Wind Symphony’s last concert of the semester in late April. There is room for about 40 paid student musicians (primarily Wind Symphony members) to perform in front of the stage.

“Fortunately, we have very good musicians who realize it’s a crunch,” Fabricius said. “You’ve got to put it all together in a hurry.

“The only things we have to play are the national anthem, the alma maters and ‘Pomp and Circumstance.’ Everything else, I can choose.”

Two of those selections always prove popular with the audience: “America the Beautiful” features “a stirring arrangement and the students play it well,” Fabricius said, while the Williams’ “Star Wars” music often draws gasps of recognition as the new graduates leave the Events Center.

During the larger ceremonies, the band usually is required to perform an extended version of “Pomp and Circumstance” while graduating class members are led to their seats. Band members wait for their cue to stop from Fabricius, who waits for his cue from a Commencement volunteer.

“It’s not hard for me because I don’t have to play anything!” Fabricius said, laughing. “It’s a matter of mental endurance and physical endurance for the musicians. But it’s got to happen. It’s one of those traditional (songs).”

Watts, a 19-year-old sophomore from Manhattan, is performing the vocal roles for the first time. Singing in front of a large crowd is nothing new for the music (vocal performance) and chemistry double major. She performed a solo at her Stuyvesant High School graduation at Carnegie Hall in New York City.

“I was nervous then because it was my own graduation,” she said.

Watts, who has never performed the national anthem solo before, said she is looking forward to being part of the weekend.

“I know people graduating, so I’ll be watching for them,” she said. “This is a great opportunity to get there and sing. It’s nice to have as many (public) vocal opportunities as I can get.”

Eight ceremonies at the Events Center over three days requires both stamina and patience from the student musicians.

“We are at every ceremony, so it is a full day every day,” said Sarah Coffey, a junior music and English double major who plays French horn and has performed at three Commencement events. “You hear a lot of the same speeches.”

“The difficult part for me is getting up early and staying up late!” Huang added. “But it’s great because I get to be with my friends who I don’t see over the summer. It’s a great experience.”

For Fabricius, a front-and-center position facing the stage allows him to not only enjoy a variety of Commencement talks from students, alumni and dignitaries, but also his band.

“I’m always pleased with the response that the band gets from the audience,” he said. “We’ll play something in the prelude, and the people will take notice and clap.

“I have the best seat in the house. The band is close (to the stage) but facing in the other direction. Some of the speakers we’ve had have been really, really good. I like being part of it.”