For LSAMP student Taylor Hitchcock, LSAMP summer research is bringing her closer to her goal of working in pharmacology and providing an opportunity to teach about deaf etiquette in the Binghamton community. 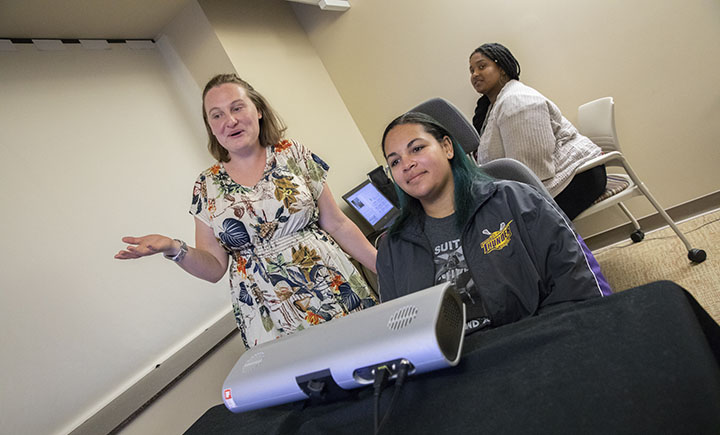 Emily Blakaley, a graduate student studying under Professor of Psychology Peter Gerhardstein, with Taylor Hitchcock (center) and Carlye Jones (right), a Bridges to the Baccalaureate Program scholar.
By Rachael Flores

“Becoming deaf was the best thing to ever happen to me.”

That may not be the first thing you expect someone to say, but for Taylor Hitchcock, she swears that becoming deaf was the key to finding herself and her confidence.

Hitchcock is a student at Monroe Community College in Rochester, but she has spent her summer at Binghamton University as part of the Louis Stokes Alliance for Minority Participation (LSAMP) summer research program.

Hitchcock started her research at Binghamton last summer as part of the Bridges to Baccalaureate program.

She works with Professor Peter Gerhardstein from the Psychology Department on research related to the visual development of young children.

“We study the development of object recognition in children by testing if a child can recognize the illusion of a square that has only the corners present without the sides, with added distractors,” she said. “The children we work with can be as young as two.” 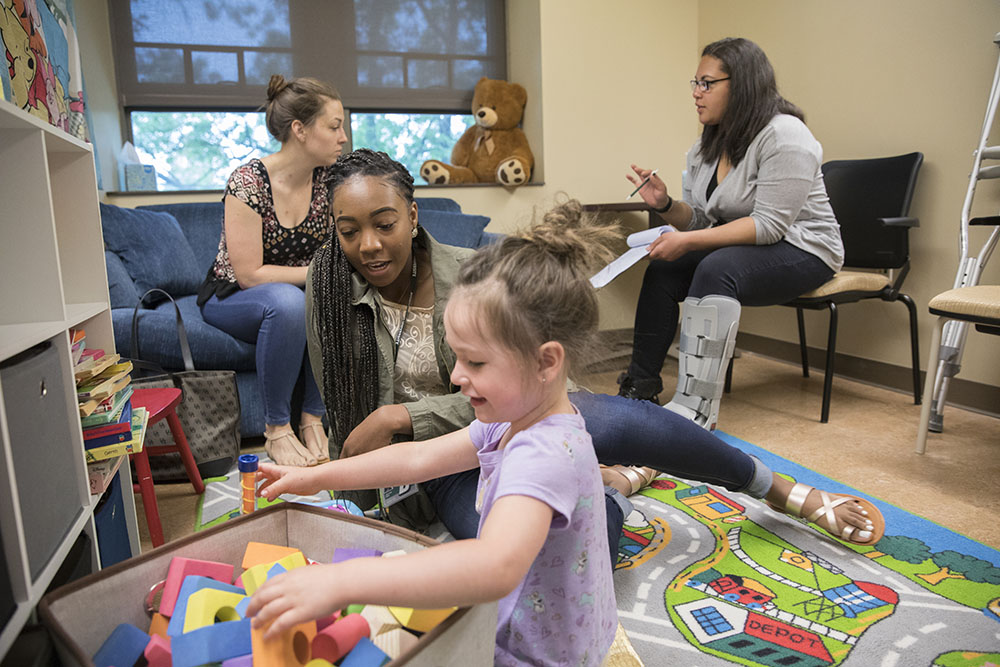 Taylor Hitchcock (right) in summer 2017 working as part of Bridges to the Baccalaureate program with transfer student Jazlynn Gray with children and their mothers in Peter Gerhardstein's lab.
Last summer, Hitchcock worked on similar research that tested how kids would react to varied rewards.

“We found that children will actually learn quicker when they are offered different rewards for certain tasks as opposed to just receiving the same reward each time.”

While working on a summer research project is hard enough, Hitchcock also had an added challenge.

“I’m the first deaf student to participate in these Binghamton programs, so I’ve definitely had to teach deaf etiquette to a few people,” explained Hitchcock.

She went deaf about two years ago and has since learned quite a bit about the nuances in how the deaf community is treated.

“A lot of people will talk to me really slowly or loudly. Some even act as if I’m dumb or won’t understand. I can read lips though and I usually have an interpreter with me. I’m fortunate that I can watch both my interpreter and read lips at the same time, it’s a skill that not all deaf people have.”

Hitchcock also said that reading lips is more complicated than one might assume.

“Some people mumble or have accents that affect how their lips move. With some people it’s just too hard for me to understand their lips and I have to rely on the interpreter. Then other people, like my family, I can tell what they’re saying just by their body movements.”

Hitchcock’s relationship with her interpreter is an important one and one that she said others can take for granted.

“I have a team of about five different interpreters that I work with when I’m at Binghamton. It’s like having your cell phone always with you. It’s the way you communicate with the world but that’s also a person that you bond with.

“How people treat their interpreters definitely varies across generations though. I’ve noticed that really old people will be so appreciative of interpreters because they didn’t have that when they were younger. Middle-aged people tend to expect that everyone learns sign language. Younger people will sometimes blame interpreters for things.

“I really value my relationship with the interpreters though. They’re like my family. I’m with them all the time.”

After becoming deaf, Hitchcock said that her social anxiety dissipated.

“I don’t care as much about what people think of me,” she said. “I feel like I didn’t really know who I was before I was deaf. Sure, I miss music and things like that, but becoming deaf is the best thing to ever happen to me.”

As for what Hitchcock plans to do once she graduates, she said she is deciding between psychopharmacology and working in pharmacology for exotic animals.

“I always loved animals since I was young and being able to combine that with my interest in pharmacology would be great. This program is really helping me decide which path I would rather take.”