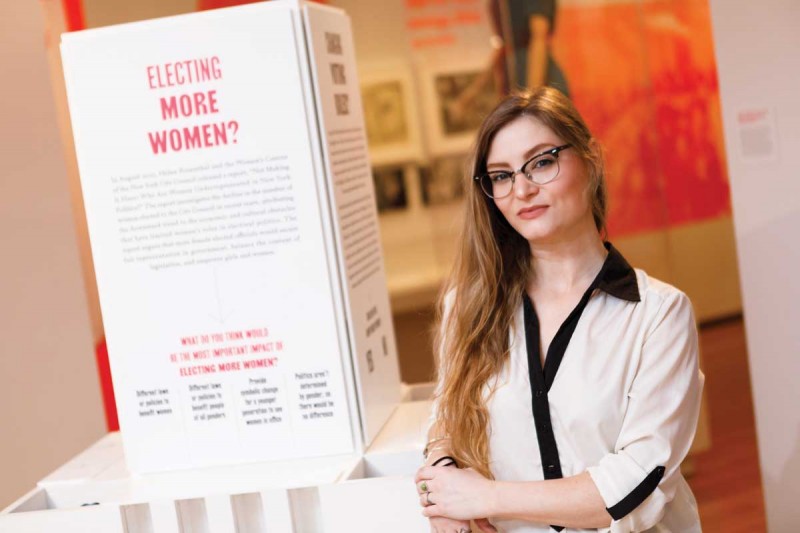 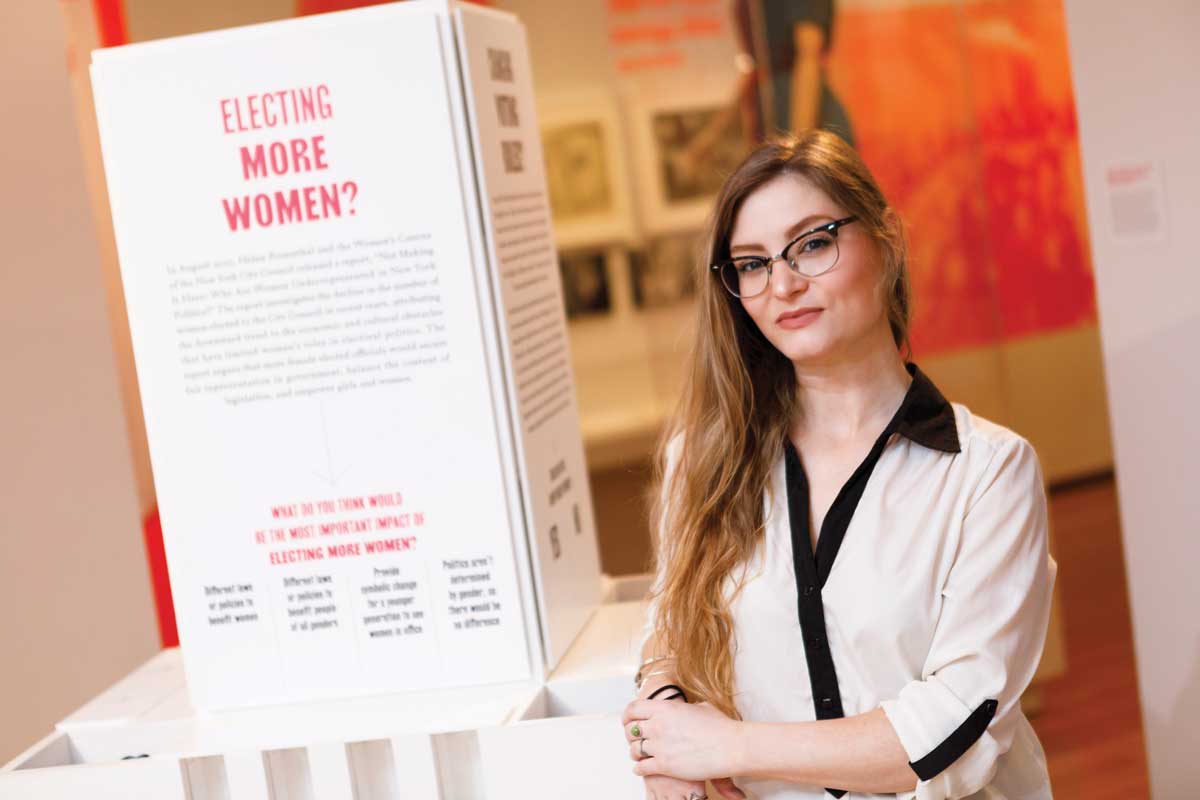 Visit the Museum of the City of New York and you won’t see “Bad- Mannered: The Nasty Women of Nineteenth- Century New York” listed among the exhibits.

It’s there, just more genteelly titled “Rebel Women: Defying Victorianism.” It was conceived and curated by Marcela Micucci, MA ’12, PhD ’16, who was inspired by the “nasty women” movement that sprang out of the 2016 presidential campaign. She used “bad mannered, nasty women” as the exhibit’s informal working title.

Some of the “Rebel Women” Micucci wants you to meet include the notorious prostitute Helen Jewett, the abortionist Madame Restell, journalist Margaret Fuller, and teacher and activist Elizabeth Jennings Graham, an African-American woman who challenged segregation on streetcars a century before Rosa Parks.

They are among the women Micucci studies — working-class women in New York City, not all of them bad-mannered or nasty — and thanks to an unusual job requirement, she has spent the past two years sharing their stories with the museum’s visitors.

A twist of fate

Micucci had just graduated from Binghamton University with her PhD in U.S. history with a specialization in women’s history, primarily 19th-century women and gender, when she applied for a postdoctoral fellowship as an associate curator at the Museum of the City of New York.

Except she had no museum experience.

“I applied on a whim,” she says, and was surprised to get the job. “Luckily the museum was looking for someone who didn’t have a lot of experience so that it could be a formative training ground.”

Her assignment was to work on a yearlong exhibit titled “Beyond Suffrage,” telling the stories of women during the first 100 years of suffrage in New York state (1917–2017).

“I came into it thinking, ‘Oh, I can do this. I write in academia, I should have no problem transitioning over to public history.’ But actually, it’s very, very difficult, as I soon found out,” she says.

A century of suffrage

“Beyond Suffrage” was an exploration of what women went through to get the vote and what they did with it once they had it. The exhibit focused on different time periods over the past century, from the early suffrage movement in New York City, the Depression era, WWII and the Baby Boom years, the women’s liberation era and the present-day resistance movement.

There were artifacts, ephemera, textiles and photographs, much of it taken from the museum’s collections.

“Dressing” the exhibit in period costumes and textiles was a lot of fun, Micucci says, because of the museum’s extensive textile and clothing collection. She and the curatorial team would peruse the archived items until they found just the right piece for the right time period.

“Some were the personal belongings of notable women,” Micucci says. “We had a dress of Lillian Wald, who was a renowned social reformer in New York City and founder of the Henry Street Settlement House. We also have an original Rosie the Riveter suit, designed by Vera Maxwell, and a large collection of hats donated to us by [social activist and U.S. Rep.] Bella Abzug’s family.”

Far more difficult was deciding how to show what was happening beyond public view.

Who were the rebel women in Victorian times? In this exhibit, curated by Marcela Micucci, MA ’12, PhD ’16, you’ll meet women who dared to speak out, hold jobs, and defy middle-class decorum and morality.

“True womanhood was a white, middle-class ideology that didn’t apply to all women, and the women who didn’t aspire to or adhere to their assigned gender roles as wives and mothers were, many times, marginalized and stigmatized,” Micucci says. “They’re independent and unconventional; we call them rebel women.

“The exhibit is an amalgam of political and professional working women and the various ways they defied the Victorian mold and pushed the envelope, each in her own unique way,” she says, and their stories remain relevant today.

“People have said that after we got the vote, it was kind of a dark time for women’s political activism,” Micucci says. “We were trying to debunk that myth, especially in New York City, where women were politically active in various ways. Even if they didn’t get elected to political office, they were doing a lot of work behind the scenes that was instrumental to the political machines of New York.”

She cites as an example the passage of the Sheppard-Towner Maternity and Infancy Act in 1921, which provided federal funding for maternity and child care. It was the first big piece of legislation that women helped pass once they got the vote.

“It’s hard from a curatorial standpoint to find objects not only in our own collection but in other archives throughout the city to show women’s political activism, when the widely held belief is that women weren’t politically active in that period,” she says.

Then there’s the actual storytelling, done in blocks of wall text, each ranging from a few sentences to a few-hundred words.

“Writing a front-facing history that can cater to a wide audience was most difficult,” Micucci says. “It’s really easy to write a dissertation about something you know so well and have researched for so long, but it’s much more difficult to get people who don’t know anything about it to comprehend and be interested and want to learn more.”

Micucci was already doing research on women and unwanted pregnancies in New York City before she had settled on a graduate school. Then she met Associate Professor Diane Miller Sommerville at an American history workshop.

“Diane works on rape and suicide, and I worked on infanticide and infant abandonment — depressing subjects but yet so fascinating in so many ways. We could really relate,” Micucci says.

“I was really impressed that an undergraduate had been to the archives in New York City, which can be very intimidating even to established scholars,” says Sommerville, who became Micucci’s advisor. “She arrived at Binghamton with passion for women on the margins — working class and poor women — and she was determined to tell their stories of unwanted pregnancies without judgment.”

Sommerville saw that passion expressed in Beyond Suffrage.

“She carried this penchant for telling the stories of ‘forgotten women’ into her planning for the exhibit. The stories of lesser-known women stand right alongside those of Geraldine Ferraro, Gloria Steinem and Hillary Clinton,” she says.

The rigor of Micucci’s training also came through in the exhibit, which Sommerville called compelling.

“In particular, she well understood that even though women lacked the right to vote, they nonetheless were active and effective political agents. They campaigned for a wide range of reforms including abolition of slavery, temperance, age-of-consent laws, education, and human asylum and prison conditions and treatment, all without suffrage,” Sommerville says.

This summer, Beyond Suffrage closed and Rebel Women — Micucci’s first chance to lead the curatorial team — opened. Shortly after, her two-year post-doc ended. Her next job may be in academics or public history. But her dream job?

That would be to work at a national women’s history museum, if one is ever built on the National Mall in Washington, D.C.

It’s something she might not have dreamed of if she and the Museum of the City of New York hadn’t taken a chance on each other two years ago.

“It’s completely transformed my outlook on museums, but also public history,” she says.