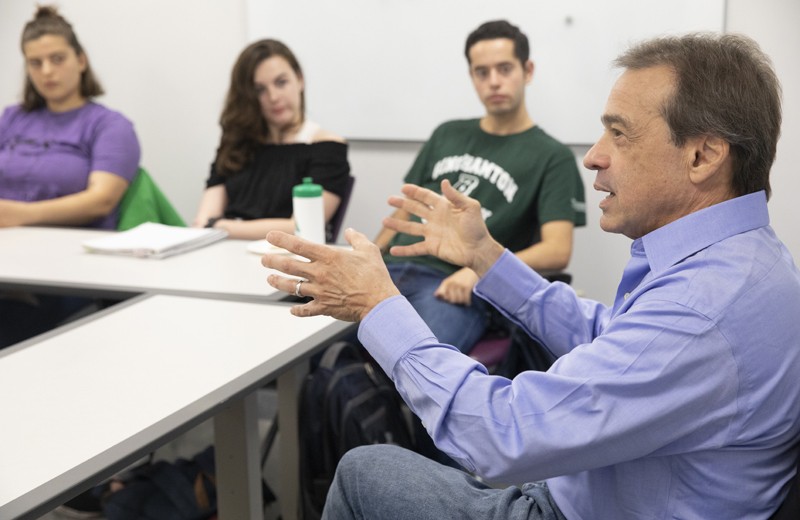 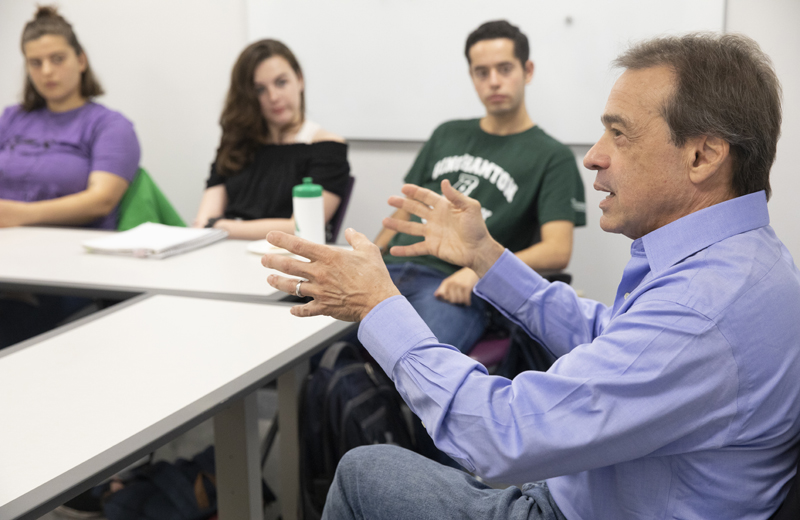 The Thurgood Marshall Pre-Law Society invited Zeldin to give a lecture on “Trump on Trial: The Mueller Investigation.” Zeldin, a CNN legal analyst and recognized financial crimes expert, gave a breakdown of the investigation, providing the 60-member audience background information on Mueller, the Trump campaign and the collusion accusations.

He laid out the reasons why Rod Rosenstein, the United States deputy attorney general, issued the Mueller mandate in the first place. Zeldin said that Rosenstein appointed a special counsel after Attorney General Jeff Sessions recused himself from the Russia investigation.

Zeldin also explained Mueller’s background, focusing on Mueller’s family history, his time in the U.S. Marines and his moral compass.

“He is a black-and-white world-view person − he has a very strong sense of what is right and what is wrong,” Zeldin said.

Zeldin pulled quotes from Mueller’s mandate, pointing out that Mueller was specifically tasked to investigate “any links and/or coordination between the Russian government and individuals associated with the campaign of President Donald Trump; and any matters that arose or may arise directly from the investigation.”

Delving into what Mueller is actively investigating, Zeldin broke the Russian indictments into two categories: the social media campaign and acts of “collusion.”

“The first is the social media campaign,” Zeldin said. “These are the Russian organizations who are using fake Facebook [profiles] and other social media platforms in order to sway public opinion in favor of Trump.”

Though Mueller’s mandate does not include the word collusion, Zeldin pointed out that it does authorize an investigation into any links or coordination between the Russian government and the people who were associated with Trump’s presidential campaign.

The first event, on June 3, was when Donald Trump Jr. received an email proposing a meeting with Russians who had potential “dirt” on Hillary Clinton. Four days later, on June 7, Trump said: “I am going to give a major speech on probably Monday of next week and we’re going to be discussing all of the things that have taken place with the Clintons. I think you’re going to find it very informative and very, very interesting.”

Shortly after this speech, on June 9, Donald Trump Jr., Paul Manafort and Jared Kushner met with at least five Russians at Trump Tower.

“[The people] working on Trump’s campaign … were hoping for a dossier of really incriminating information [on Hillary Clinton] … but they didn’t get it,” Zeldin explained. “The so-called ‘dirt’ was not really delivered at that meeting.”

Though the information the Trump campaign received on the Clinton campaign was not as valuable as Trump suggested it would be, Zeldin pointed out that this is still collusion.

“All of that stuff is a crime, whether or not it is actually completed,” Zeldin said.

These accusations of “collusion” are also closely intertwined with information that was shared via WikiLeaks by the Trump campaign.

“In the second Russian indictment, Mueller charges Russians with hacking the DNC computers and hacking John Podesta’s emails and distributing that through WikiLeaks,” Zeldin said.

Zeldin pointed out that while some people view WikiLeaks as a news source that is protected by the First Amendment, state intelligence agencies describe the organization as a “hostile non-state intelligence service.”

“You can pick, politically, whether you see WikiLeaks as a hostile non-state intelligence service or a First Amendment-protected news source,” Zeldin explained, “but it doesn’t really matter for the purposes of determining whether the Trump campaign did something wrong.”

Sharing his own theory, Zeldin said that Russia’s assistance to the Trump campaign probably began in an attempt to harm Hillary Clinton.

“I think, personally, that when this campaign was started it was payback − it was really designed to hurt [Hillary Clinton] more than it was to help [Trump], at its origin,” Zeldin said. “Later on, they realized that the Trump organization was sending signals that it was receptive to this sort of Russian involvement, which led them to act more brazenly in their help toward the Trump campaign.”

Moving into the Q&A section of his talk, a student asked Zeldin whether Trump sharing WikiLeaks links is actually collusion, or more like retweeting information that’s already in the public domain.

Zeldin further emphasized the role of WikiLeaks in the Trump campaign, pointing out that the biggest WikiLeaks release came on what may have been the worst day for Trump on the campaign trail: the day the “Access Hollywood” tape came out.

“In the campaign of 2016, Trump praised WikiLeaks 145 times,” Zeldin said. “Most famously, on the campaign trail, saying ‘WikiLeaks, I love you,’ [similar to when] he said ‘Russia if you can hear me, help me find the missing Clinton emails.’”

When asked about how he separates work from his personal life, Zeldin chuckled and said that the fault in that question is to presuppose he has a personal life.

“I don’t have a life that I have any control over whatsoever,” Zeldin said, laughing. “So if any of you are thinking about becoming on-air legal analysts, do something different.”

Because the investigation is still ongoing, there are many questions that are still unanswered.

Living this case minute-by-minute, Zeldin said he will continue to follow the investigation as it unfolds.

“All these things are churning at the moment,” Zeldin said. “In the end we have to wait and see how things play out.”