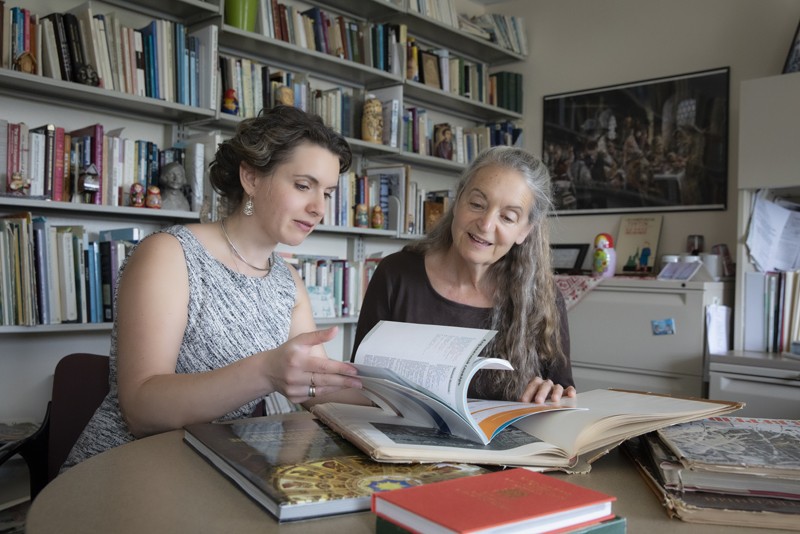 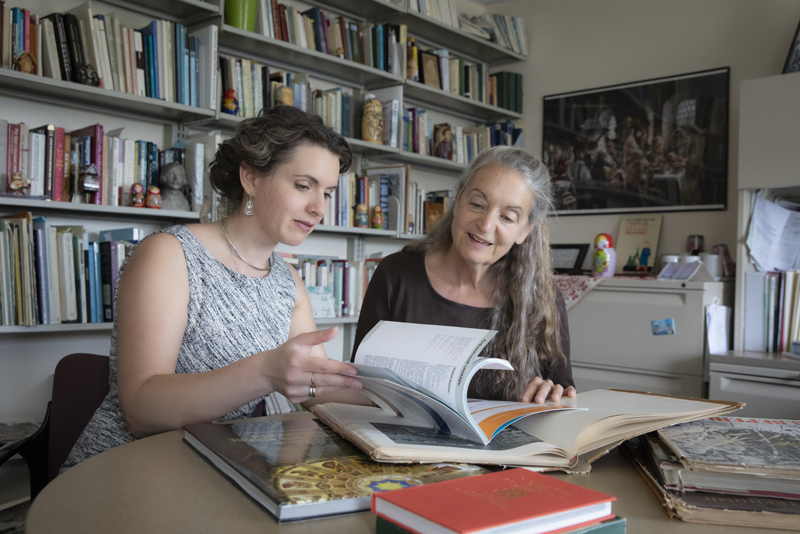 Sitting around the table sharing borscht and stuffed cabbage, students pass dishes and say spasibo (thank you) to one another in the comfort of their instructor’s home.

This happens each year when Nancy Tittler invites her Russian-language students to her house to share food, language and - most importantly - culture.

The program originated in the early 1980s. Since then, the popularity of Russian Studies has fluctuated due in part to the political climate, says Tittler, a senior instructor of Russian and director of undergraduate studies.

“During the Cold War, numbers of American students taking Russian just blossomed as we went into the ‘50s, ‘60s and ‘70s,” she recalls. “When I was a college student in the ‘70s, the programs were enormous. My study abroad had 160 people in it from different schools.”

In 1980, Tittler was asked to start a beginning Russian class at Binghamton University. In 1983, the class was incorporated into the German Department. By 1995, Tittler and her colleagues shaped a Russian major under the Individualized Major Program (IMP).

“After the mid-‘90s, there was tremendous attrition of students in Russian programs,” Tittler says. “At one point I was the only one teaching anything in the field at Binghamton.”

Now the major offers six semesters’ worth of language, literature and cultural studies classes and a two-course sequence for “heritage speakers.”

There is also a variety of cultural studies and literature classes such as Slavic Folklore, Russia and the World, Russia’s Defiant Women, Russians in Soviet Cinema, and Activism in Russia - all of which are taught in English for everyone to take.

Because it is a small program, the classes lean heavily on student input.

“Our students say in many venues that they feel completely nurtured and listened to,” Tittler says. “We really spend a great deal of energy shaping our courses around our students.”

While the number of students taking languages is smaller than for other subjects, it doesn’t mean that learning Russian is undervalued. Marina Zalesski, a lecturer in Russian, believes it’s tied to cultural attitudes.

“Unfortunately, there’s so little emphasis put on learning languages,” Zalesski says. “Knowing another language does not get the same respect as being completely proficient in technology or in computers.”

And for Zalesski, who is fluent in both Russian and English, learning another language is more than just about being multilingual.

“It really has to do with our educational system in the United States,” she says. “We need to think about the world differently [and] be less selfcentered about it and really look into the future.”

This means opening your mind to a new culture and undoing some previous biases, she says.

“The way to confront that [bias], the way to deal with it is through education,” Zalesski says. “It’s through these conversations and through understanding.”

Students who have studied Russian see their education paying off as the politics between the United States and Russia become more polarized.

“(Russia) is much more diverse than people give it credit for, and people just see it as one person,” says Alexander Resnick ‘18, who majored in linguistics, Russian and French. “You’re so much more than what your government says and what the figurehead of your government says. It’s very similar in the case of Russia. [Russian President Vladimir] Putin is one of many people who are part of the executive branch.”

Nina DePalma ‘13, who taught English in Russia after graduation, believes her teaching experience and university education dramatically changed her outlook despite what she was seeing in the world around her.

“I think that it gave me a perspective on Russia that was different from what I was hearing on the news,” she says. “It’s important to learn the cultural history, as well as the political history, because they’re obviously connected.”

By learning about a country’s culture, you can connect with the people on a level that humanizes them - apart from how their government is defined in the media, Zalesski says.

Knowing the language, students are able to travel abroad and connect face-to-face with the people they’ve been learning about in their textbooks.

“It cannot be done through documentary films. You have to live through it. You have to learn about it in order to gain a true understanding of how things are,” Zalesski says.