The art of student curation 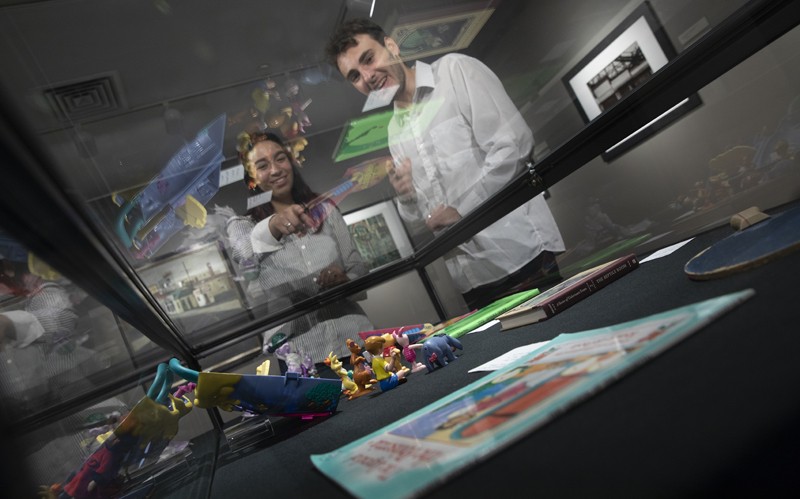 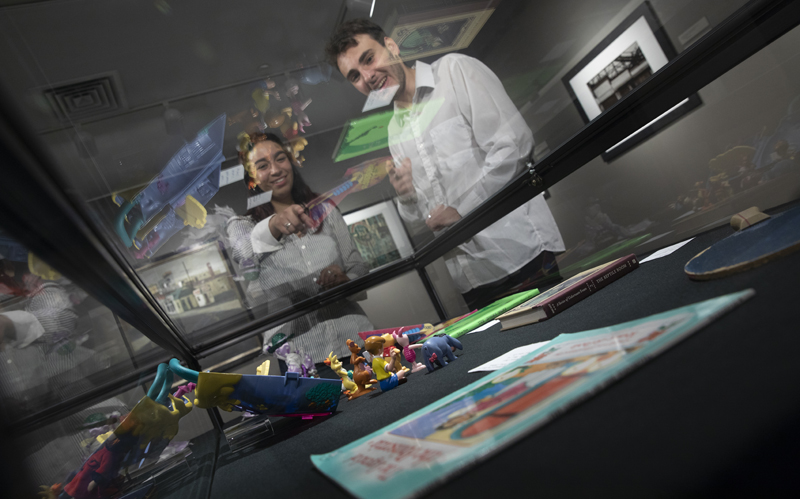 Picture this: You have access to a university’s entire art collection. You can pick the pieces that speak to you, find a common thread and build your own exhibit. What would it look like?

This was the assignment given to students by Associate Professor Pamela Smart in her spring semester art history class, titled Museums and the Art of Exhibition. The students split into three groups, working with alumni, local collectors and Binghamton University Art Museum Director Diane Butler, to research and mount exhibitions in the Nancy J. Powell Lower Galleries of the museum.

Undergraduates and graduate students have curated eight exhibits in the museum since spring 2017.

The class offers an opportunity to take art viewership to a new level through a hands-on experience in a field that typically advises “do not touch.” It’s part of Butler’s ongoing effort to encourage a relationship between students and the art in the museum’s collection.

“Art shouldn’t just be understood by art historians and explained to others,” Butler says. “Everyone brings their own baggage, their own preferences, their own experiences to seeing artwork.

“In an art museum, we want to show how objects have special significance to different people, not just show pretty things.”

The three exhibits that grew out of Smart’s class and were displayed in the gallery were Peter Guttman: Collection as Self-Portrait; Collectors as Donors: Understanding the Landscapes of Collecting; and Romanticized Recollections: Aesthetics of Corrupted Childhood.

“In various ways, we were working with the value of a collection,” Smart says. “The idea was to show that a university art museum’s collection could be mobilized in a range of different ways.”

Students found inspiration in the collections of two alumni: the robust object collection of travel writer and photographer Peter Guttman ‘76 and a Joan Miró painting donated to the museum by Stacy Newman Kandel ‘99.

To demonstrate Guttman’s Collection as Self Portrait, student curators had a photograph of Guttman’s living room enlarged and printed on a special paper that was mounted on the walls, floor-to-ceiling, in a small room in the gallery - all designed to make observers feel they are in Guttman’s living room, among his personal collection of art and artifacts. A Walter Benjamin quote outside the room read, “Ownership is the most intimate relationship that one can have to objects. Not that they come alive in him; it is he who lives in them.” The students’ exhibition coincided with an exhibition of Guttman’s photography in the main gallery.

Stacy Newman Kandel ‘99 works at Deutsche Bank in internal and external software systems and services. She earned her degree in art, with an emphasis in visual graphic design, and says she’s still using her degree 20 years later. Kandel donated a print by Joan Miró to the Binghamton University Art Museum.

Question: What inspires you to collect art?

Answer: Having art around me every day inspires me to be as creative as I can be. It makes me feel good. It’s about understanding the artists and understanding what they were trying to target. Every time I look up and I see a Calder or a Picasso, it’s integrated into my everyday life. We have a Calder in our family room, and right under it is my children’s Little Tikes kitchen, so it’s part of who we are and how we function. It’s about having beauty and good intentions integrated into everything that we do on a day-to-day basis

Q: What prompted you to donate?

A: I wanted to do something specific for where I started, and I thought a really good way to do it was to donate to the permanent collection in the Binghamton University Art Museum. I donated the Miró for the students to have a modern piece that wasn’t there when I was a student.

A: Miró is probably my favorite of all the modern or surreal artists. And probably it’s because he uses a lot of whimsical and childlike imagery, and it’s very colorful. Essentially, Miró spent a good portion of his career developing his own design language. As students, and throughout the course of our lives, we are continuing to develop. So, what better way for students to learn than to have this piece as they develop as artists?

Q: What was your experience working with students curating the Collectors as Donors exhibit?

A: The students came to my house and did a tour of the different pieces in our home. We had fun; I answered questions and found out a little bit about them. Subsequently, I went to the opening of the exhibit in January, which was really cool. I love being involved with the students. Since then, I’ve been back to Binghamton and am mentoring two students.

Hopefully I can be somebody who’s relatable, has walked in their shoes, who was an art major and is still working in a field that is similar. I work with visual designers every single day, and I have a family and I still do art on the side. I want to do anything I can to make sure they come out with not only a realistic view of what the world is like, going into an art-related field, but that they are really excited about going out to design and create in the world.

For the Collectors as Donors exhibit, students worked with Kandel and her contribution of the Miró, along with pieces donated by local art collectors Gil and Deborah Williams.

The choices of artwork allowed an exploration of two different perspectives on collecting and donating. Pieces were selected and contrasted with each other on opposite walls to explore the relationship between color, space and line between them.

The largest exhibit, Romanticized Recollections, included paintings, prints and photographs from the museum’s collection along with objects from the student curators’ own childhoods, invoking a theme of nostalgia.

Zuzu Boomer-Knapp ‘18 says the team hoped that people would look at the personal touches included in the exhibit, such as the handwritten labels and old toys, and draw connections to their own memories.

“The most rewarding aspect of the whole process was the museum opening. Seeing all of our hard work come together and watching people engage with our exhibit was such an exciting moment for all of us,” Boomer-Knapp says. “This was a project we had worked on all semester, so we were all super proud to share it with our friends and families.”

Smart says it’s thrilling to watch students engage with the University’s art, and also that it’s not uncommon for her to hear former student-curators reflect on how much that hands-on, high-impact experience meant to them.

“It’s a very powerful of way of learning that’s not just about what kind of understandings you’re able to develop, it’s also how it sticks with you,” she says.

Ward was a prolific 20th century artist. Because Rose studied printmaking as an undergraduate, she was able use an artist’s perspective to unravel Ward’s work. The exhibit included prints, paintings and books by Ward.

“In general, I think it’s really important for art historians to learn about the artist’s process,” Rose says. “My part was putting in, ‘This is what a wood engraving is. This is how it’s different from a woodcut. These are the tools, and that’s what they do,’ which is harder to do if you don’t have the physical experience of working with printmaking.”

Rose’s exhibit was exceptional because she included the “proofs,” or rough drafts, of Ward’s prints.

“We had the different proofs, and we knew we wanted to put them in because it’s so rare to have everything from the sketch to the finished product,” she says. “[Butler] was really excited because prints aren’t usually the most prominent in museum collections.”

The French Prints exhibit focused on the cultural aspects of printmaking from 16th- to 18th-century France. Davila, an art history major, was in charge of curating the exhibit, with help from Morganti, who acted as her translator. A native French speaker and geography major, he soon brought his own perspective to the project with the inclusion of vintage maps.

Eager to use multiple sources, Davila and Morganti borrowed from the University’s rare books collection to supplement their use of portraits and maps from the museum’s archives.

“I was able to put in what I wanted to say about the art rather than have to read it from somebody else. I could finally give my perspective,” Davila says. “That was really rewarding.”

Flores, a specialist in ancient Ecuadorian and Peruvian cultures, worked to identify and authenticate a collection of indigenous South and Central American objects given to the museum.

“We were running into ideas about the lives that those pieces have before they come into a collection. We were dealing with issues like artifacts coming from weird sources,” Flores says. “For example, there was some evidence of trafficking with the objects.”

Flores and Butler decided to curate an exhibit based on the issue of looting and trafficking as a dilemma that museums face.

The exhibit included a collection of objects that represent some of the issues museums face in “accessioning,” or identifying and cataloging pieces. Objects included a trafficked textile piece, a ceramic vase and a statue head of questionable authenticity.

Butler now needs to determine which should be accessioned, which are fakes and which could possibly be returned.

“What we can show is that museums, not only in the United States but also worldwide, have to deal with these issues - how their pieces get here, how companies or auction centers will sell objects with nonspecific backgrounds that are probably fake,” Flores says. “In one way or another, they ended up at the museum.”