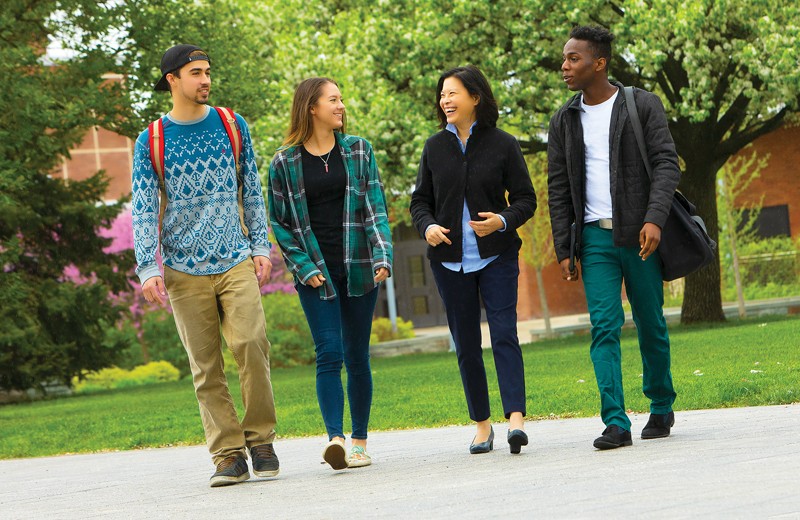 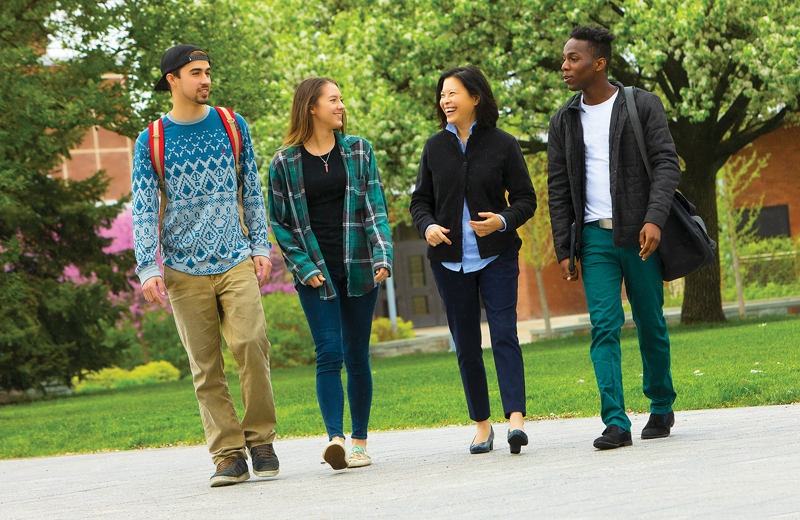 Lisa Yun noticed a change in her students after she moved toward project-based teaching a decade ago.

“When students were pushed to reach out to community members and practitioners and go beyond the classroom walls, they became more dynamic in their learning,” says Yun, an associate professor of English and Asian and Asian American Studies (AAAS). “They challenged themselves. The projects were creative.”

What is community-engaged learning?

* is connected to specific learning outcomes;

* provides structured time for students to analyze and connect the service experience to learning.

Yun and four students later built a course called Community Engagement that enables teams of classmates to collaborate with community members on research projects that are sustainable and accessible to the public. Yun’s course is now a model for community-engaged teaching and is just one example of academic-service learning (ASL) and community-engaged learning (CEL) classes offered by Harpur College faculty. This course also links to another class, Community Internship, in which students can earn a stipend funded by Harpur alumnus Audie Chang ‘73.

“The (course) that I took with Professor Yun was a unique opportunity to take a class unlike any other at Binghamton,” says Greg DiPaul, an English major from Otisville, N.Y. “Instead of being a typical class where you do homework and tests and focus on your individual grade, this class gave us the opportunity to look beyond ourselves and do something that actually can make a difference and give us a sense of accomplishment that other classes just aren’t able to give.

“Seeing the finished projects of all the groups in the class - and realizing how many resources and people there are on campus willing to lend a helping hand and make changes in our community - was a wonderful experience.”

Yun’s class, offered once a year through the English and AAAS departments, emphasizes collaboration and communication. Students come together in small teams to determine and develop a project that addresses the histories or needs of communities that have been marginalized or are missing in public discourse.

“We work hard at producing this other side of writing, which is the capacity to communicate with others in an effective way,” Yun says.

For example, a group in the most recent Community Engagement course decided to examine the “unseen faces” of the Black Lives Matter movement: allies from different races.

Students made their pitch and got their classmates to agree on a project that would feature interviews with Black Lives Matter supporters including a Hudson Valley politician, a Binghamton pastor and an Asian woman from the Midwest.

“This is where the engagement begins,” Yun says. “Through the interviews, the students discovered an amazing network of people throughout the country. The different views were useful and inspirational.”

The project culminated with a multimedia event in Old Union Hall called “Unseen Faces of the Black Lives Movement.” The exhibit, which features texts, profiles, photos and music, continues today through a website.

“This is work that is sustainable,” Yun says. “It’s not just an academic exercise - it’s knowledge and content.”

Omid Ghaemmaghami is an assistant professor of Arabic in the Department of Classical and Near Eastern Studies in Harpur College. He has taught Modern Standard Arabic for nearly 10 years - and since 2014 at Binghamton University. Through the class, students participate at the American Civic Association in downtown Binghamton.

Question: What made you incorporate a community-engagement component in the class?

Answer: The Greater Binghamton area is fortunate to be home to a number of Arabic-speaking immigrants. Many participate in English as a Second Language (ESL) classes offered at the American Civic Association (ACA), a nonprofit organization based in downtown Binghamton that has worked for over 75 years to help refugees and immigrants integrate into American society. A language and cultural exchange between the Arabic program at Binghamton University and the ACA that would permit students to activate their classroom learning while offering a service to the community seemed only natural.

Q: How do students work with the adult learners at the ACA? How do the students use the information they receive?

A: In order to practice speaking Arabic with native speakers of the language, students from third-year Modern Standard Arabic (ARAB305) participated in language and cultural exchanges at the ACA with immigrants and refugees from the Arab world who currently reside in Binghamton and take ESL classes. After icebreakers, students are paired with native speakers of Arabic. For approximately 30-45 minutes, conversations take place in Arabic, following a list of questions prepared by the students in advance. For the next 30-45 minutes, the same questions are posed in English. Dinner, socializing and a game follow the formal portion of the program.

The collaboration offers community members an opportunity to practice their English with native speakers of the language, socialize with students from Binghamton University (whom they otherwise would seldom, if ever, meet), share aspects of their culture that are dear to them, and tell their personal life stories to students. Students are expected to deliver an oral presentation in class.

Q: Why is it important for Harpur faculty and students to take part in community-engaged learning classes?

A: Education is not an end; it is a means. It has the potential of being a source of light that diffuses learning, contributes to the betterment of society and promotes the emergence of unity in the community.

Community-engaged classes have the potential of transcending the fragmentations in our at-times painfully divided community while building bonds of friendship and increasing the capacity and consciousness of students and faculty alike for service to our fellow human beings.

Other 2018 Community Engagement projects included a Broome County immigrant online guide, a zine devoted to mental health and an oral history of Asian American political participation. All projects are presented at a public event and are accessible to the public through a website, database or journal.

“It’s a terrific challenge for students,” Yun says of the class. “There is trial and error. But the learning is much more creative, especially as students put their skills to the test.”

Al Vos is another faculty member who makes community-engaged learning courses a priority.

The associate professor of English teaches three CEL courses: Literacies of Power, Practicum in Community Service, and Practicum in Leadership and Community Development. The first class is housed in the Writing Initiative, while the latter two are offered through the Human Development Department of the College of Community and Public Affairs.

In a class such as Practicum in Leadership and Community Development, students provide service at one or more nonprofit organizations in the community while learning about the history and challenges facing Greater Binghamton and its vision for the future.

“All three are founded on my realization that in each of these courses my students are on what I call a ‘journey,’” Vos says. “I regularly challenge my students to think about their learning as a process. I want them to chart their personal growth. All my CEL classes involve journaling. All my CEL classes require initial personal statements and a reflective, personal ‘capstone essay’ at the close of the semester. My CEL classes are designed to get students out into the community - to get outside the campus ‘bubble.’”

Vos, who has taught at Harpur College for nearly 50 years, says he has learned that students have a heart for service.

“Students’ majors - and lives - can be changed when they engage with the community,” he says.

Harpur College alumni also understand the importance of engaging with the community.

Shari Lawrence Pfleeger ‘70, LHD ‘00, and husband Charles Pfleeger are expanding the Scholarship for Community Involvement beginning in the 2018-19 academic year.

“As some national politicians escalated their criticism of government in the early ‘90s, we decided to escalate our commitment to community service,” Shari Lawrence Pfleeger says. “The notion that profits would always motivate the best solution to a problem was counter to our experience. We felt that the country was losing its sense of community - and with it a commitment to sharing and service. So we created the scholarship to reward students who demonstrated a serious, long-term commitment to community service.”

The scholarship, currently awarded to a full-time, incoming Harpur freshman to pay New York state tuition and mandatory fees, in its expansion will be renewable to the student for three more years. The Pfleegers recently pledged to increase the endowment, so that four students can be supported simultaneously. Additional recipients could be selected as the scholarship endowment grows.

Shari Lawrence Pfleeger, the retired director of research for the Institute for Information Infrastructure Protection, says community engagement provides students “context and perspective for almost all they will learn, see and do.”

“In the short term, we’re rewarding students for their commitment to community service,” she says. “In the long term, we hope scholarship students will continue their service, inspire others to do the same, and - if they can - donate to the scholarship fund to help other students who follow.”

Besides working with the community, students often find themselves collaborating with peers from other schools and disciplines. Scott Gardner, an electrical engineering major from Owego, N.Y., helped to lead the “Broome Immigrant Guide” project in Yun’s course. The website has logged over 400,000 visitors.

The development and support of courses such as Lisa Yun’s is an important mission of Binghamton University’s Center for Civic Engagement (CCE).

“When I think of (community) engagement in higher education, I think beyond the realm of service,” Huth says. “Service implies that students are doing something for the community or to the community: The University holds the knowledge, and we are the ones giving back. Community engagement should be more than that. I think of it as mutually beneficial relationships with community partners.”

The CCE has added a faculty engagement associate to help facilitate and assist faculty projects. Barrett Brenton, a former anthropology professor and faculty coordinator for academic service-learning and community-based research at St. John’s University, will do everything from introducing community leaders to faculty members to assisting with syllabi to running course-designation workshops.

“We hope to see the number of academic-service learning and community-engaged learning courses increase over the next couple of years,” Huth says. “There is a lot of room for growth.”

“I learned more about our local community than I ever expected to,” he says. “I learned about the ethnic breakdown of Broome County and used this information to determine which languages to add to our project. From the American Civic Association, I learned we had many students and also residents who spoke Arabic. It helped me determine Arabic was a language we should add to our website.”

Jessica Lamazor, a human development major from Brooklyn, was part of the group that produced the mental-health awareness zine.

“The project experience was empowering,” she says. “Giving students the freedom to choose a project based on a topic of interest enhances their performance and gives a much more fulfilling outcome.”

Morgan Whitney, a biology major from New Hartford, N.Y., says her group’s work on the Black Lives Matter project required dozens of interviews on and off campus.

“It was a time-intensive project, but Professor Yun consistently encouraged us to challenge ourselves, while also providing the necessary resources to make sure each of our projects were successful,” she says. “Watching our projects come to fruition as the class came to an end was worth the semester of hard work.”

Vos recalls testimonials from students in their end-of-the-semester essays that have assured him of the power of community-engaged learning.

“How can one not teach CEL courses when one learns that, often for students, they are life-transforming experiences?” Vos says.

“It’s good to have different people involved,” she says. “It seems like more are getting involved in this kind of teaching - not just at Binghamton, but it’s springing up all over the country.”