Researchers found that when airports and airlines add the delay costs passengers endure to their scheduling plans, the number of delays decreases overall. 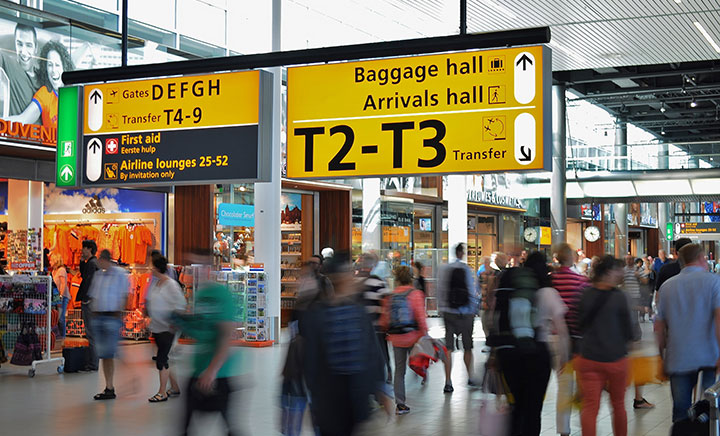 Scheduling and coordinating air traffic can be difficult, but according to a new study from Binghamton University, taking the airlines’ and passengers’ delay costs into account can actually save airlines money and result in fewer delays.

With New York Gov. Andrew Cuomo’s recent proposal to transform New York City’s John F. Kennedy International Airport, researchers at Binghamton University decided to look into how to make airports more efficient. They did so by incorporating the actual cost of a delayed passenger into the equation.

Currently, decision support systems (DSS) are being used to help direct flights and air traffic in hopes of preventing delays. Most of these systems use parameters such as time or distance to manage and determine the optimal schedule.

Yoon
Associate Professor Sang Won Yoon, along with his PhD student Duaa Serhan and Hanbong Lee, an aerospace engineer at NASA, developed two models that consider the actual cost incurred when passengers and flights are delayed.

Delay costs can include numerous things such as fuel consumption, maintenance, crew costs, taxiing and additional travel time – all of which are included in the models.

“Airports mainly focus on increasing the runway throughput and, in general, most other papers focus on delay as a time, but they don’t consider the actual cost of the delay,” said Serhan, a graduate student in industrial and systems engineering who developed the models for the paper.

The researchers explained that there are normally two perspectives used when scheduling aircraft and that these perspectives focus on different parameters to either maximize or minimize. The first perspective is the airport itself, which is typically owned by the government and regulated by the Federal Aviation Administration (FAA). The second is that of the airlines or the companies operating the actual aircraft.

“From the airport’s perspective, the runway throughput is the most important so they want to quickly send out as many aircraft as possible,” said Yoon. “From the airline company’s perspective, they just want to minimize the delay.” The airport tries to choose a schedule based on which one allows the most aircraft to leave in a given period, while the airlines want to minimize the amount of time the aircraft spends at an airport.

The researchers decided to take into account a third and often overlooked perspective: the passengers.

“Time is a cost but airline companies also have to reroute passengers. If they miss the flight then they have to schedule a new flight or provide a voucher. There are also immeasurable costs like missing a call with your family or a business meeting,” said Yoon.

It’s these immeasurable human costs that can sometimes be hard to quantify and are difficult to include in calculations, but nonetheless are something almost everyone has experienced.

“You can have the passenger missing something important. For example, I almost missed a conference last year, so you can miss opportunities as well,” said Serhan.

In the researchers’ models, these inconveniences were captured by their classification of three types of delay costs: passenger delays, passenger missed connections and additional operating costs.

Two models were developed and tested under various air traffic scenarios and compared against three other commonly used scheduling methods.

One of the models that took the passengers’ perspective into account displayed the overall lowest airline and passenger delay cost, reducing the costs by a minimum of 6.4 percent compared to the other methods. It was also able to reduce the number of flight delays by 8.6-65.4 percent when compared to two of the other reference models, and performed similarly to the third reference model.

As for what comes next, the researchers said they are looking at the effect of weather.

“What we are investigating now is changing air terminal configurations based on the weather uncertainty. We are working on routing and scheduling aircraft when there are uncertain weather conditions and trying to minimize delays,” said Serhan.

The article appears in the October edition of The Journal of Air Transport Management.