’Jazz Nutcracker’ to return to the Binghamton University stage

"Jazz Nutcracker," seen at right from the 2017 show, will run from Nov. 30-Dec. 2 at Watters Theater. Image Credit: Jonathan Cohen. 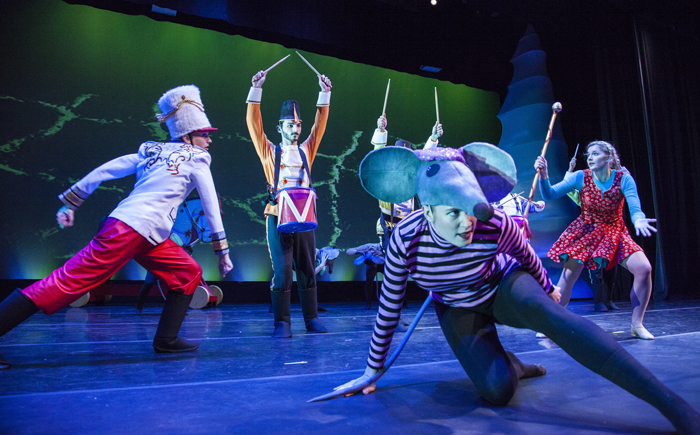 "Jazz Nutcracker," seen at right from the 2017 show, will run from Nov. 30-Dec. 2 at Watters Theater. Photography: Jonathan Cohen.
By Michelle Zaurov

Some say that the holidays can create a feeling of magic – and that’s exactly what the Theatre Department’s spinoff of the Nutcracker ballet, “Jazz Nutcracker,” hopes to bring to Binghamton this year.

“The show is high-energy and upbeat. We have a lot of tricks and it’s jam-packed with dancing,” said JoEllen Kuhlman, the show’s director and choreographer. “What’s new this year is that we have a real magician in the show (professional entertainer and actor David Black), which means we’ll have some real magic and that should be really fun.”

“Jazz Nutcracker” tells the traditional story of the Nutcracker ballet in which a young girl named Clara (played by student Abigail Calandra) receives a nutcracker as gift from her godfather, Herr Drosselmeyer (played by Black). The audience is taken on an adventure in Clara’s dream as her beloved nutcracker comes to life and all of her fantasies play out.

While the traditional Nutcracker is a ballet, “Jazz Nutcracker” tells the story through a range of different dance and music numbers in addition to ballet, such as jazz, swing, ballroom, modern, acrobatics and tap.

“We follow the same story line and basically have the same characters, but style-wise it’s different,” Kuhlman said. “It’s a variety of genres all blended together so it’s fun for the audience to watch just because it keeps jumping around. Our music has the traditional songs but it’s a jazz version of it. It’s like a twist where you’ll hear a jazz song and then all of a sudden you hear a Nutcracker melody pop up.”

This will be the production’s third year in the spotlight, and each year the cast and crew try to contribute something new to the show.

“Our first year was so different; it was classic jazz-based,” Calandra said. “It’s definitely grown every year — we’re adding new numbers and magic tricks, which is fun. We’re spicing it up a little bit each year and adding new cast members so our show is slowly growing.”

Kuhlman said the show wastes no time having fun on stage, as the opening scene is literally a party.

“We have a big party scene in the beginning with parents and kids,” Kuhlman said. “There are couples dancing. Kids pop out and they’ve got some acrobatic tricks. … It’s crazy and all over the place.”

Kuhlman added that she loves the show’s ability to express a range of feelings and cater to all age groups.

“There’s a fun battle scene that’s like chaos in the best way possible, and then into the snow scene which is the complete opposite. It’s calm and serene like you’re in a snow globe,” she said. “Every scene is so different and good. I feel like it has something for everyone, from little kids all the way to grandparents. It’s a community thing.”

The cast, which features college students and children from the Binghamton area, feels like family — especially among those who have been part of the show all three years.

“The cast is great and (Kuhlman) is phenomenal,” Calandra said. “I’ve worked with her for three years. She’s one of my best friends and is like my mom.”

“I always love the cast — I feel like they’re a lot like me because a lot of us have been dancing our whole lives and it’s nice to have a group of people who get it,” said cast member Gabrielle DeSantis. “There’s a couple of people in the show who I’ve danced with since my freshman year, and we’ve always gotten along so well.”

Kuhlman hopes “Jazz Nutcracker” will continue to be an annual University tradition, and has noticed the Binghamton community coming back for more.

“Some people from the community who have come and watched are like: ‘I can’t wait for you guys to do it again!’” Kuhlman said. “It’s really cute.”

In the meantime, cast members want the audience to leave with a bit of holiday spirit this winter.

“I hope they feel happy that they came to our show and that they feel kind of magical,” Calandra said. “That’s what our show is trying to portray: Even in the darkest of times, there can be a lot of happiness and magic.”