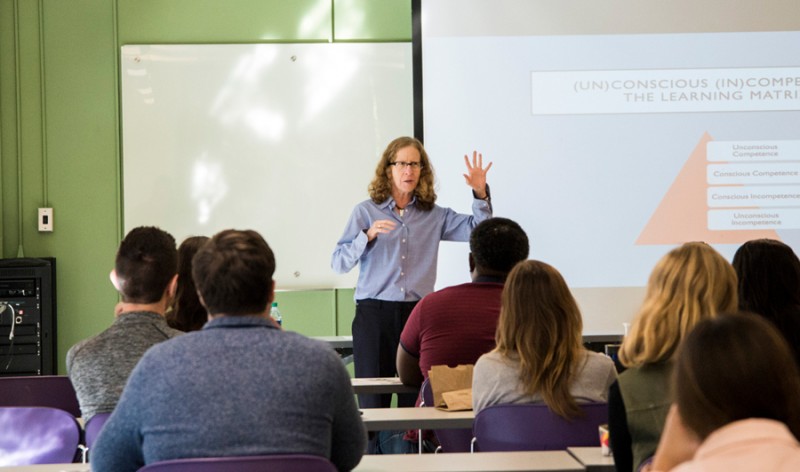 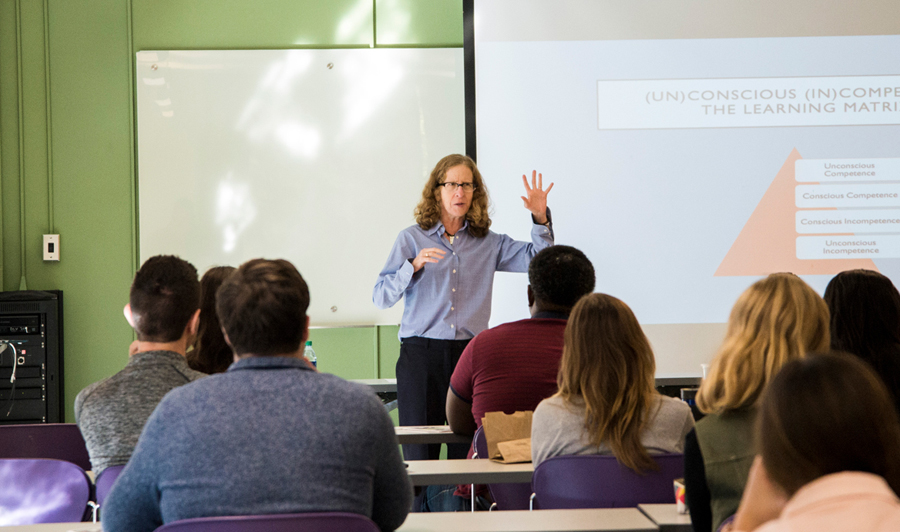 Developing a professional persona is often overlooked or forgotten by students preparing for law school, a Harpur College alumna said during a Homecoming talk on Oct. 5.

“Your professional persona will be a valuable asset and you should treasure it and value it as much as possible,” attorney/educator/author Toni Jaeger-Fine ’83 said. “It is one of the few things in life that each of us has complete control over.”

The talk, titled “Becoming a Lawyer: Discovering and Defining Your Professional Persona,” featured Jaeger-Fine offering a broad range of tips to the pre-law students in attendance. She emphasized, however, that the discussion was relevant to everyone, regardless of career path.

Three ingredients to developing a professional persona are building blocks, self-management and relationships. In the “building blocks” category, Jaeger-Fine stressed the importance of “sustained, deep questioning about where you fall short and what you can do better.”

She also focused on observation and imitation as key tools.

“I always try to tell my students when they begin to network to just observe the first time they go to a bar association event,” she said. “Look at how people behave. Look at how people engage. Observe and imitate the people you admire and respect.”

Habit formation was another tool that received attention. Research shows that 45 percent of what is done every day is based on habit, she said.

As a habit example, Jaeger-Fine challenged students to put their shoes on in the reverse order and then tie the laces in a different way.

“You won’t believe how difficult it is!” she said. “It will give you a sense of how much you depend on habit. … Developing good habits make us happier and leads to the development of more good habits.”

In the building block area of intelligence, Jaeger-Fine urged students to ignore IQ and focus on emotional, social, technological and business intelligence.

The “self-management” category began with an examination of the mindset. For Jaeger-Fine, people want to be around someone with a positive mindset – someone who is resilient, enthusiastic, gritty and resourceful. She admitted that she initially was lacking in the latter as a young lawyer.

“Every time I had a question, I would run back to my boss,” she said. “Don’t do that. It’s bad form. Use your resources to try to figure out the answers.”

Characteristics such as showing appreciation and dignity, displaying confidence and having elegance are also key, she said.

Jaeger-Fine used her interactions with Bonzani as examples of his elegance. He insisted on having a lunch at a halfway point and then wrote a personal apology email when work forced him to cancel.

“People remember these gestures that are not necessary, but show a real depth of character,” she said.

In the final category – “relationships” – Jaeger-Fine highlighted effective communication and the power of collaboration.

“Law school is uniquely individualistic,” she said. “It’s you against the world. But law practice is all about relationships. You need to learn how to work collaboratively.”

“Learn as much as you can about different people,” she advised. “Ask them with a respectful curiosity to tell you more about their background. You will always reach better decisions when you embrace inclusiveness.”

Jaeger-Fine, who has just released a book through West Academic Publishing that the talk was based on, said her greatest concern for young students is that they will do something negative that sticks with them on social media.

“Be smart,” she said. “Be sure that if you are a little less than smart, you are around people that you trust. If there is a photo out there, you should presume that a prospective employer or client will find it.”