Nagaraju and his team will examine the body’s immune response to the production of new dystrophin protein. Image Credit: Jonathan Cohen. 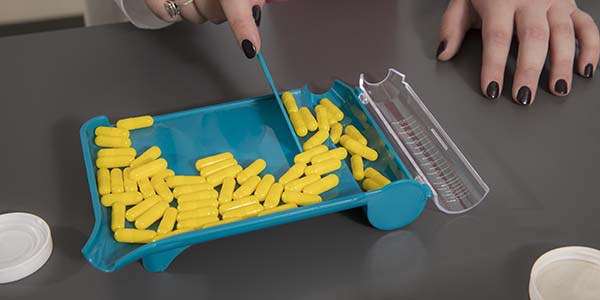 Nagaraju and his team will examine the body’s immune response to the production of new dystrophin protein. Photography: Jonathan Cohen.

Parent Project Muscular Dystrophy (PPMD), a nonprofit organization leading the fight to end Duchenne muscular dystrophy (DMD), has awarded a $329,000 grant to Kanneboyina Nagaraju, professor and chair of the Department of Pharmaceutical Sciences, and his team at Binghamton University’s School of Pharmacy and Pharmaceutical Sciences. Nagaraju will continue his work examining the body’s immune response to the production of new dystrophin protein resulting from exon skipping and gene therapy treatments.

Duchenne is the most common fatal genetic disorder diagnosed in childhood, affecting approximately one in 5,000 live male births. Caused by a change in the dystrophin gene, the disease robs, muscles of the ability to function or repair themselves properly. While there is currently no cure for Duchenne, both exon skipping and gene therapy are being pursued as potential treatments that may slow its progression. Nagaraju hopes to understand the effect these treatments may have on the body’s immune system.

“Long-term immunological consequences of dystrophin gene correction and gene replacement therapeutic strategies in DMD are currently unknown,” Nagaraju said. “This project will explore interventions that modulate inflammation and immune response after gene and exon skipping therapies. I am really excited that PPMD recognized the merits of the studies proposed in this grant.”

“For almost 25 years, PPMD has funded research aimed at treating Duchenne and finally therapies like exon skipping and gene therapy are near term. Now we need to look ahead to optimize the effectiveness of these promising new therapies,” according to Abby Bronson, PPMD’s senior vice president of research strategy. “We believe there is great value in the work Dr. Nagaraju and his team are doing – work that could improve the post-treatment outcome of these potential therapies.”

Further investigation by Nagaraju into the mechanisms that influence both the distribution and the extent of dystrophin restoration are key to optimizing these treatments.

Nagaraju will explore the combination of exon skipping or micro-dystrophin gene therapy with an immunosuppressive treatment, using one of the following drugs:

• Treatment with rituximab to block antibodies to newly produced dystrophin.

• Treatment with abatacept CTLA4ig to halt an anti-dystrophin immune response.

• Treatment with either prednisolone, vamorolone, or eplerenone to test the respective reduction in inflammatory and anti-dystrophin immune response.

Rituximab is currently an FDA-approved drug for use in rheumatoid arthritis (RA) and non-Hodgkin’s lymphoma. This off-label use would seek to suppress the immune response via inhibition of mouse B-cells, one of the two main cell types involved in the immune response. B-cells produce antibodies that act as signals to the immune system. By preventing antibody production against the newly expressed dystrophin, the amount of dystrophin generated in muscle and resulting muscle function may be improved.

Like rituximab, abatacept is an FDA-approved drug for RA. Abatacept helps to prevent activation of T-cells, the other main cell type involved in the immune response. By disrupting the immune response through T-cell inhibition, rather than just preventing antibody production, abatacept has the potential to have greater effect on increasing dystrophin expression than rituximab.

The last series of experiments will investigate three different anti-inflammatory drugs: prednisolone, vamorolone and eplerenone and their impact on dystrophin restoration after treatment. Each drug’s effect on inflammation, immune response modulation and muscle function will be compared.

“Both exon skipping and gene therapies hold great promise as treatments for Duchenne,” Bronson said. “Like Dr. Nagaraju, PPMD believes it is important to support those therapies with additional treatments that create a more favorable environment in the body and could improve their impact.”

Parent Project Muscular Dystrophy (PPMD) is the largest, most comprehensive nonprofit organization in the United States focused on finding a cure for Duchenne muscular dystrophy. Its mission is to end Duchenne.