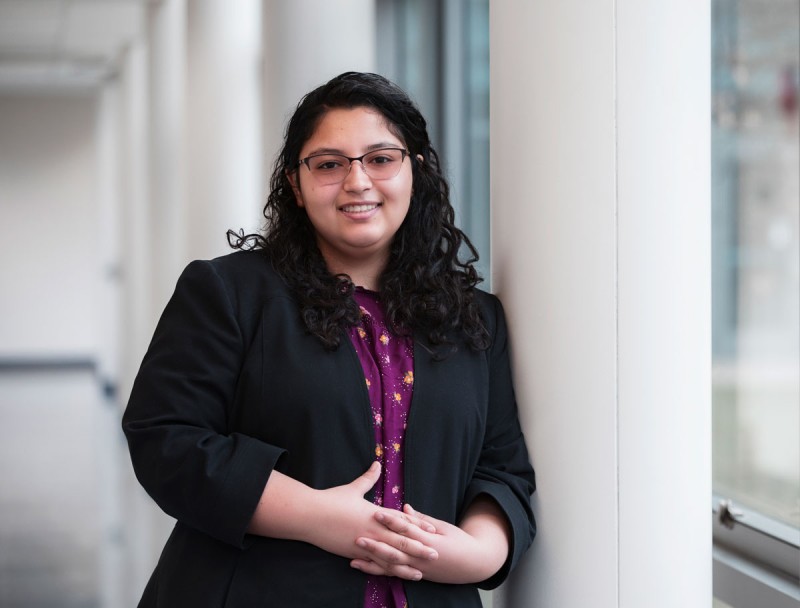 Amelia Martin is among the first cohort of students in Binghamton University's Master of Public Health program. Photography: Jonathan Cohen.
By Chris Maiorana

“My parents both came from nothing—my mom and dad grew up very poor, my mom in Puerto Rico and my dad in New York City—and they both pulled themselves up and didn’t want me and my siblings to have to struggle like they did,” said Amelia Martin ‘18, a student in the Master of Public Health program at Binghamton University.

A native of Brooklyn, N.Y., Martin has always been interested in politics. She also loves science. She started off as an undergraduate in Harpur College of Arts and Sciences and began working in a biology lab. After receiving a bachelor’s degree in biology, she planned on getting a master’s degree in the same subject but realized it wasn’t the right fit.

Through a mutual friend she was introduced to Associate Professor Yvonne Johnston, who encouraged Martin to apply to the University’s public health program, part of the Decker School of Nursing. Johnston is founding director of the program, which began in 2017.

“I really like Dr. Johnston’s program because a lot of it is evidence based, so it’s very ‘sciency’ in that respect. And it goes about these social problems in a formulaic way; I like that a lot because I feel like that’s how I think,” Martin said.

Public health is a multidisciplinary field that sits at the intersection of social and biomedical sciences, drawing on concepts from epidemiology, biology, behavioral science and informatics, as well as social work and public administration. However, one of the unique facets of the program is what it teaches outside the classroom.

“One of the aspects I really like is this part called the experiential, which is basically the application of what we’re doing,” Martin said. She explains that students bring ideas from other classes and apply them.

“What I like about public health is it’s very application based — I like having tangible examples,” Martin said. “I think that’s why in science one of the things I always liked was the lab components. I’m just one of those people who wants to be on the ground doing things.”

Assignments often take students outside the classroom and give them experience interacting with and learning about the local community.

“During an experiential assignment we had to evaluate a neighborhood, so we were assigned either north or south Binghamton by our professor,” Martin said. “We had to do walking surveys and drive around and evaluate the neighborhood, checking things like the [condition of the] sidewalks and what type of stores they have. Were places run down? What is public transport like? We had to evaluate it and give a presentation.”

Martin also worked with the Rural Health Network of South Central New York and was involved in its Food and Health Network (FaHN), a nonprofit program that provides access to and supports the connections between local farms and communities. She said she particularly enjoyed helping out with the organization’s farm-to-school taste test.

“FaHN is trying to bring healthier foods to schools in Broome, Tioga and surrounding counties,” she said. “One of the ways they do that is with a federal program called New York Thursdays, where once a month the schools get these really healthy lunches sourced with local food.”

“We made samples of food that could be put on the New York Thursday menus, passed out samples at schools and had the students vote on how much they liked them,” Martin said.

This sort of local outreach, along with Martin’s passion for science, community involvement and desire to solve problems, have convinced her the MPH program is the right place for her.

However, Martin doesn’t intend to stop her education there.

“I want to go to law school and do a dual JD/PhD,” she said. “It’s a big deal. You don’t see women of color in those types of positions often, and I want to go in those spaces and advocate for people.”

After that, Martin’s plans are still undecided, but she knows she wants to help organizations like the Rural Health Network and support programs such as FAHN that bridge the gap between government programs and the communities they serve.

“I definitely think that a lot of these problems we have can be dealt with at the policy level, but aren’t being dealt with at that level. That’s why I want to get my law degree,” Martin said. “We need to change some of our laws and that’s where I want to take my career.”