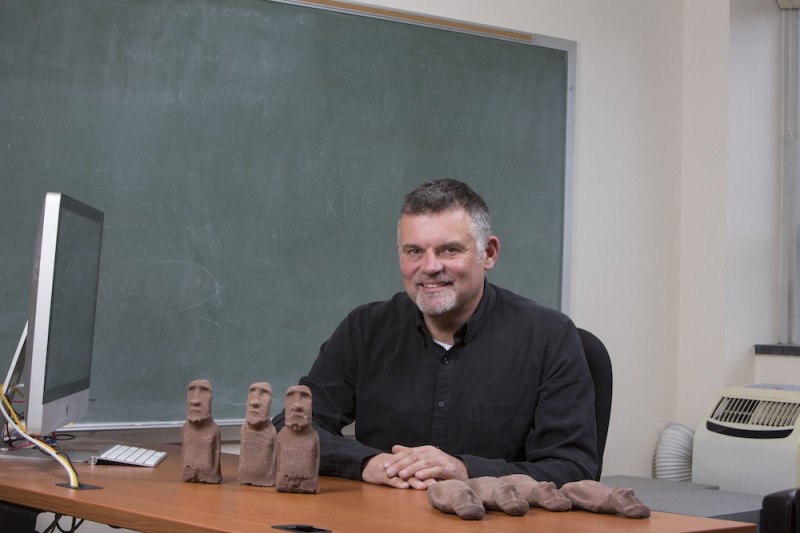 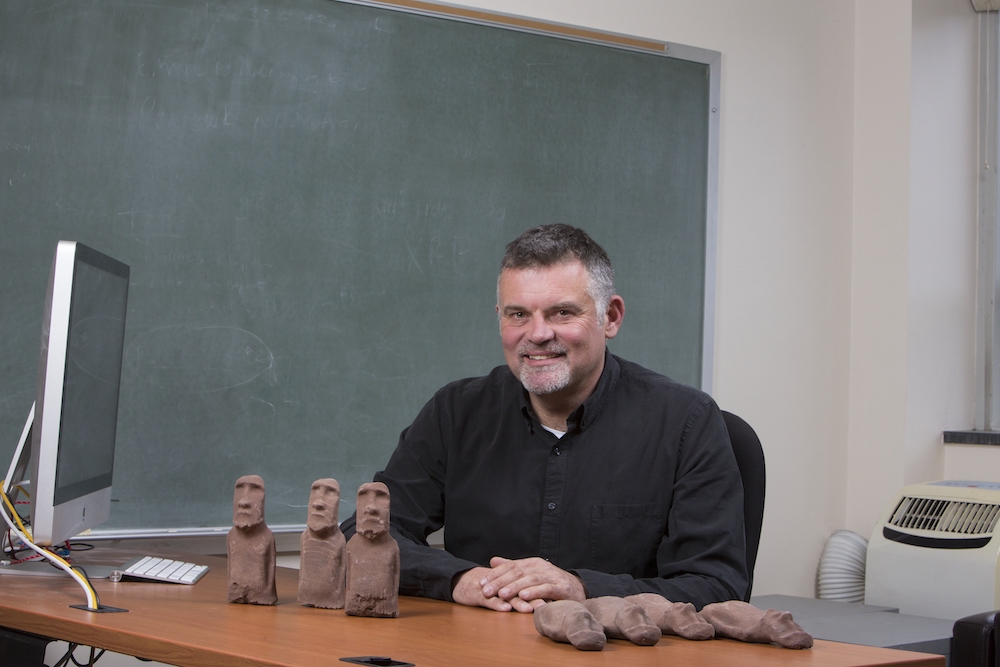 BINGHAMTON, N.Y. – The ancient people of Rapa Nui (Easter Island, Chile) built their famous ahu monuments near coastal freshwater sources, according to a team of researchers including faculty at Binghamton University, State University of New York.

The island of Rapa Nui is well-known for its elaborate ritual architecture, particularly its numerous statues (moai) and the monumental platforms that supported them (ahu.) Researchers have long wondered why ancient people built these monuments in their respective locations around the island, considering how much time and energy was required to construct them. A team of researchers including Binghamton University anthropologist Carl Lipo used quantitative spatial modeling to explore the potential relations between ahu construction locations and subsistence resources, namely, rock mulch agricultural gardens, marine resources, and freshwater sources—the three most critical resources on Rapa Nui. Their results suggest that ahu locations are explained by their proximity to the island’s limited freshwater sources.

“The issue of water availability (or the lack of it) has often been mentioned by researchers who work on Rapa Nui/Easter Island,” said Lipo. “When we started to examine the details of the hydrology, we began to notice that freshwater access and statue location were tightly linked together. It wasn’t obvious when walking around—with the water emerging at the coast during low tide, one doesn’t necessarily see obvious indications of water. But as we started to look at areas around ahu, we found that those locations were exactly tied to spots where the fresh groundwater emerges — largely as a diffuse layer that flows out at the water’s edge. The more we looked, the more consistently we saw this pattern. Places without ahu/moai showed no freshwater. The pattern was striking and surprising in how consistent it was. Even when we find ahu/moai in the interior of the island, we find nearby sources of drinking water. This paper reflects our work to demonstrate that this pattern is statistically sound and not just our perception.”

“Many researchers, ourselves included, have long speculated associations between ahu/moai and different kinds of resources, e.g., water, agricultural land, areas with good marine resources, etc.,” said lead author Robert DiNapoli of the University of Oregon. “However, these associations had never been quantitatively tested or shown to be statistically significant. Our study presents quantitative spatial modeling clearly showing that ahu are associated with freshwater sources in a way that they aren’t associated with other resources.”

According to Terry Hunt of the University of Arizona, the proximity of the monuments to freshwater tells us a great deal about the ancient island society.

“The monuments and statues are located in places with access to a resource critical to islanders on a daily basis—fresh water. In this way, the monuments and statues of the islanders’ deified ancestors reflect generations of sharing, perhaps on a daily basis—centered on water, but also food, family and social ties, as well as cultural lore that reinforced knowledge of the island’s precarious sustainability. And the sharing points to a critical part of explaining the island’s paradox: despite limited resources, the islanders succeeded by sharing in activities, knowledge, and resources for over 500 years until European contact disrupted life with foreign diseases, slave trading, and other misfortunes of colonial interests.”

The researchers currently only have comprehensive freshwater data for the western portion of the island and plan to do a complete survey of the island in order to continue to test their hypothesis of the relation between ahu and freshwater.