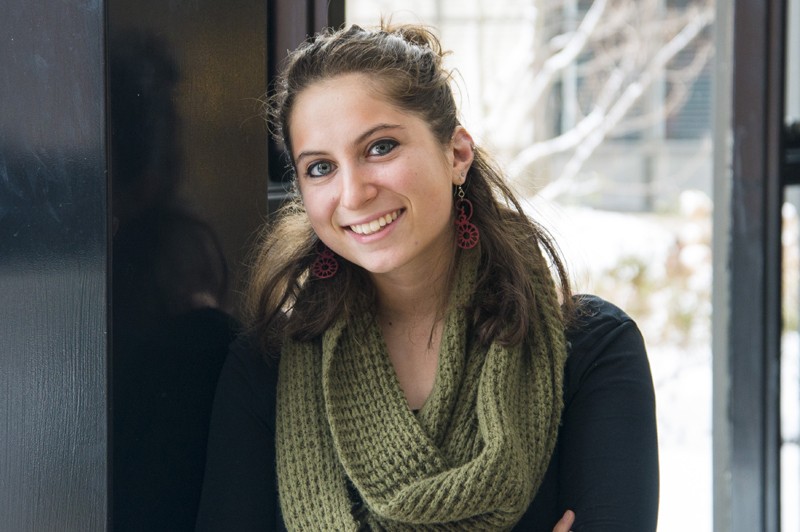 To Hannah Walter, making a global impact is more than just thinking internationally. It starts with solving local problems first.

“I think we live in an amazing community, but it’s also flawed, and as students we have the responsibility to keep a close eye on it and advocate for change,” Walter said. “We have a lot of power in our community that we may not understand that we have.”

Walter, a native of Bethesda, Md., is a senior at Binghamton University majoring in sociology. Her research primarily focuses on drug addiction — specifically opioids and how they’re overlooked in the criminal justice system.

According to Walter, she first became interested in studying the relationship between drugs and the justice system after taking Introduction to Sociology with Professor William Martin.

“He motivated me to do creative research surrounding the criminal justice system in the Binghamton area,” Walter said. “Now that I’m a senior, he’s my advisor for my senior thesis. It’s cool because it goes full circle with him.”

Walter’s research goes beyond the classroom. During her junior year, she looked at jail release dates and dates of deaths by overdose at the Broome County Jail. The data she collected led her to conclude that there is a lack of effective treatment within the jail for those struggling with drug addiction.

“Not only is it an ineffective system, but the jail actually has no motivation to rehabilitate people,” Walter said. “We shouldn’t rely on jails to treat people with substance abuse disorder because they profit off addiction.”

This year, Walter is continuing her research by interviewing local activists in the community and finding solutions on how to effectively treat those overcoming addiction. One issue she wants to dissolve in the Broome County Jail is the cash-bail system.

“A majority of people in the Broome County jail have not been convicted of a crime; they just are not able to pay their bail,” Walter said.

Walter also hopes to see a decline in the usage of drug courts, which are specialized treatment programs that serve as alternatives to jail for those with a history of drug addiction.She would rather see a push for more community-based treatment, which will avoid sending those who relapsed back into the criminal justice system.

“Relapsing is a natural part of recovery,” Walter said. “If you relapse while at drug court, you’re automatically thrown in jail. The court doesn’t really understand addiction and it’s a deeply flawed system.”

Currently, Walter is an intern at Truth Pharm, a Binghamton-based non-profit organization that raises awareness and reduces stigmas associated with substance-abuse disorders. One of the projects she worked on was installing Narcan kits, or overdose reversal shots, in local fast-food restaurants and gas stations.

“With the Narcan kits, we train the employees on how to use them so they can administer the shot and prevent fatalities,” she said.

Aside from making positive changes within Broome County, Walter also saw her life change when she studied in Ghana last fall.

“I knew I wanted to go somewhere that was a total culture shock and where I could be immersed in something new,” Walter said. “Studying abroad in Ghana was the most self-transformative experience because it taught me how to be a better and more respectful visitor and realize what the actual culture is like.”

After graduation, Walter plans to take a gap year to gain experience in sociology before pursuing a master’s degree in social work.

“I’m interested in working with veteran populations or military families. I think it’s an area that needs more workers and it’s also an interesting intersection between trauma, addiction, class and all of these factors,” Walter said. “I hope with my sociological background, which helps me understand certain groups of people and how certain institutions work, it’ll help me become a social worker.”

In the meantime, Walter wants to continue making local changes within the community, one step at a time.

“I don’t like when people say ‘I want to change the world’ because I think there’s a lot of ego behind it,” Walter said. “I think changing individual after individual has a much greater impact that can snowball into something even bigger.”