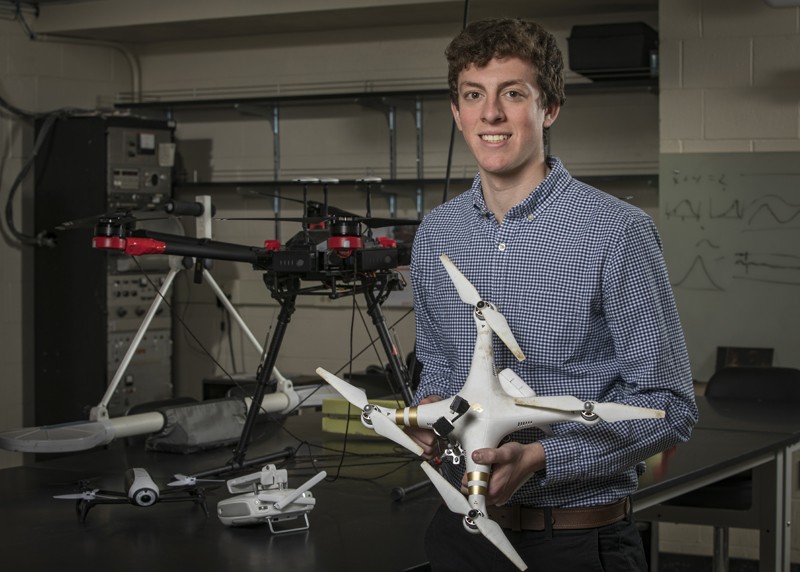 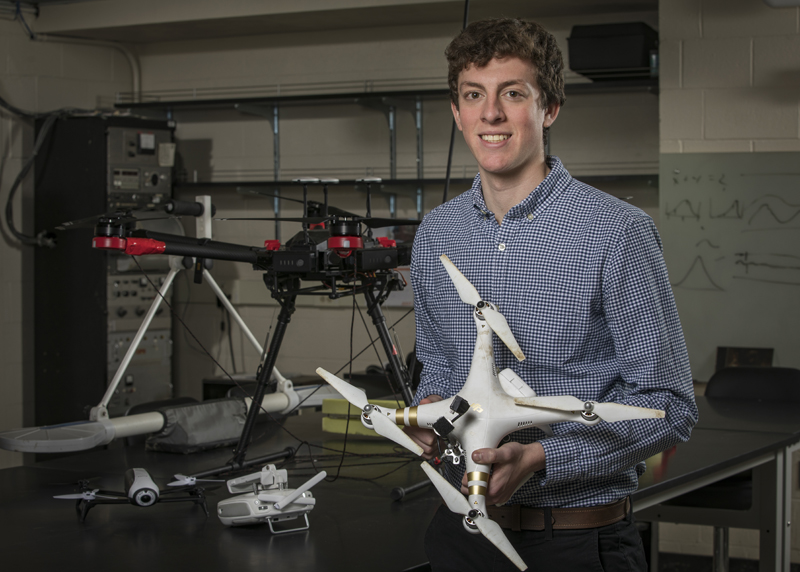 Will Frazer was part of a geology-student team that earned a top prize in the Create the Future technology design competition. Image Credit: Jonathan Cohen.
By Sylvana Levine

“The contest takes innovative ideas in seven different categories, and essentially there are prizes for each category and a grand prize winner,” Frazer said. “We won first place in the aerospace and defense category.”

Frazer — a senior studying geophysics — teamed up with Baur — a junior studying geology — to enter the international Create the Future technology design contest that allows people to submit ideas that stimulate and reward engineering and technological innovation.

Baur and Frazer’s research focuses on plastic land-mine detection. Their submission used thermal technology to detect plastic land mines in countries such as Afghanistan, where land mines were used as a military tactic.

“Our submission was a description of how we attach thermal cameras to drones and fly over to detect plastic land mines based on heat differences between the surrounding environment and the mine,” Baur said.

Land mines are explosives that are concealed underground and used to destroy or disable enemies and their machinery. Baur and Frazer’s research focused on PMF1 land mines, which were a Soviet design used in the Soviet Union’s war in Afghanistan in the late 20th century.

The PMF1 explosives are set off when they reach a certain pressure point and are especially difficult to detect because they are made out of plastic.

“Their entire bodies are made out of plastic, where the more traditional land mine has some sort of metallic casing that can be detected with electromagnetic methods very easily,” Frazer said. “They are also difficult to find because a plastic land mine can be as small as your iPhone, or even smaller.”

The inspiration for the research began with Baur’s Freshman Research Immersion (FRI) project, for which Frazer was a peer mentor. The team looked at all land mines and unexplored ordnances before focusing specifically on problems with plastic land mines.

Baur and Fazer worked with Alex Nikulin, assistant professor of geological sciences, and Timothy de Smet, research assistant professor with the FRI, and said the two Binghamton faculty members made their research fun and exciting to conduct. Nikulin and de Smet served as faculty advisors for the Create the Future project.

“Tim and Alex give us the freedom — sometimes too much — to make our own research decisions, which has been valuable in developing skills,” Frazer said.

The team won a workspace computer to further the research as well as bragging rights by beating a NASA team that entered the same category.

Though they won the contest, this is just the beginning of Baur and Frazer’s research.

“The end goal is to develop a full system that can be deployed to detect these land mines,” Frazer said. “The next step is to figure out an automated methodology to detect them. Right now they are not automatically detected; you have to manually look at the data to find them. So we are looking into doing supervised and unsupervised machine learning to detect them.”

Baur and Frazer said Binghamton University allowed them to excel in their research and continues to offer opportunities in their field.

“Despite being a growing research institution, I’ve never felt that there was something we couldn’t do because we were at a public university,” Frazer said. “Everything that we want to do, we are able to because of Binghamton.”

Baur and Frazer are both looking forward to continuing their education and research.

“I am planning on going to graduate school for geological sciences, specifically remote sensing,” Baur said. “Also, in terms of bringing the project further, Will and I are in the preliminary steps of creating a nonprofit organization for land-mine detection.”

Frazer plans to pursue a doctorate in seismology, the branch of science concerned with earthquakes, which is a different type of geophysics than he has studied at Binghamton. He anticipates he will continue working with Baur on research and their nonprofit.

Although both students have spent long hours in the lab, they each find time to immerse themselves in campus life as well. Frazer plays for the Binghamton club water polo team and Baur is vice president of the BU Fine Arts Society.

“The diversity in the opportunities at Binghamton is incredible,” Baur said. “Academic and non-academic, there is so much to do here. From club soccer to research, there is never a dull moment.”