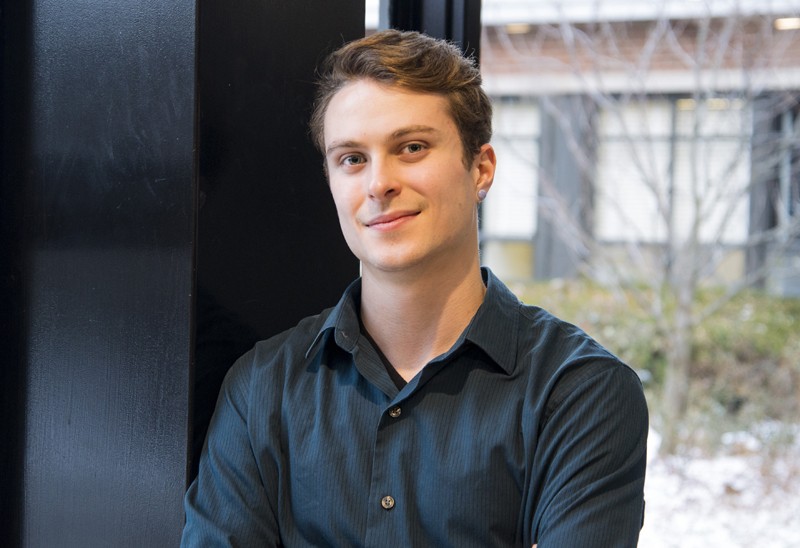 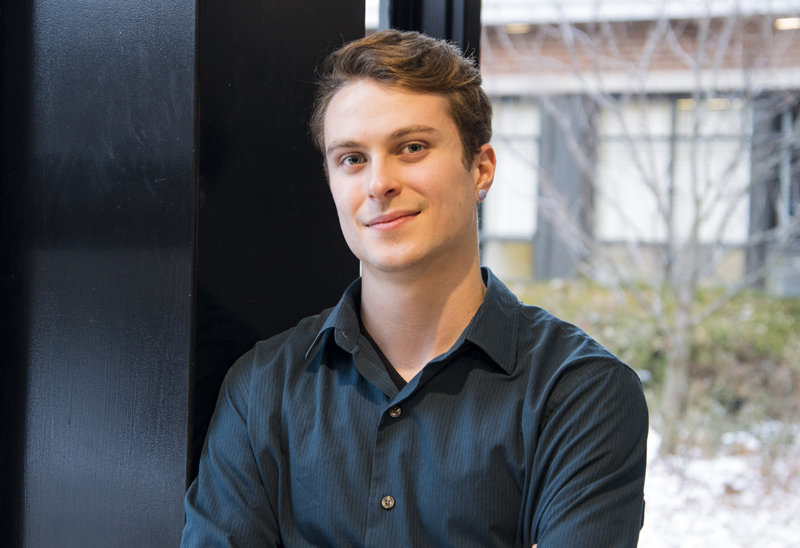 Michael Coyle enjoys being in the lab so much that he even goes there to kill time.

“People in the lab would always joke that I practically moved in because I was taking on graduate student hours,” Coyle said. “I love research: Whenever I have a lot of work for my other classes, I go to lab to procrastinate. It’s just really hands-on work. It takes me out of the textbook and it shows me real results.”

Coyle is a senior double majoring in integrative neuroscience and biochemistry. He has conducted research as part of his honor’s senior thesis in Professor Christopher Bishop’s lab since fall 2017.

The Bethpage, N.Y., native’s research focuses on reducing the side effects produced from a drug, L-DOPA, when treating Parkinson’s disease.

When one has Parkinson’s disease, the region of the brain that produces dopamine dies. L-DOPA is used to supply the missing dopamine to patients, but it comes with major consequences.

“It’s called L-DOPA-induced dyskinesia,” Coyle said. “Within 10 years, 90 percent of patients get this side effect and it’s really debilitating. They have punching and flailing motions, they lose control of their fine motor skills, they get jaw tremors and tongue protrusions. It’s an inevitable side effect.”

Coyle credited his positive lab experiences to the graduate students he works with.

“The graduate students are family to me at this point,” Coyle said. “That’s what I love about the lab the most. It’s a great environment. We’re not just a bunch of co-workers; we really are a family.”

Not only does he consider them family, but he also said they’re a source of inspiration to keep working hard.

“They’re absolutely incredible and so passionate,” Coyle said. “The one I work under the most is constantly reading papers. She will go so in depth to make sure every little thing is noticed in her samples.”

Coyle’s motivation is driven by seeing other people care and put effort into their work. That’s why attending the Society for Neuroscience conference for two consecutive years had such a positive impact on his work ethic.

The Society for Neuroscience is the world’s largest neuroscience-related organization. It holds an annual international conference where thousands of people in the field from around the world present on their research and discoveries.

Bishop nominated Coyle and two other undergraduates during fall 2018 to fly to San Diego to help present research, learn and network during that year’s five-day event.

“There are rarely any undergraduates who attend so it was an awesome opportunity that Dr. Bishop allowed us to go,” Coyle said. “Not only were we presenting in this amazing conference but we were also learning so much.”

Coyle said he’s taken a lot away from his experiences at the conference, including a newly developed interest in pursuing research in epilepsy.

“At the first conference I tried to stay focused on more Parkinson-relevant papers because I didn’t really know what I wanted to do,” Coyle said. “But the second time, I was looking at a lot of posters on epilepsy and now I have a better idea of my future directions.”

Coyle’s interest in epilepsy began when he took a class with Bishop in spring 2018 called The Diseased Brain. After learning about it, he realized how closely it tied to his research on Parkinson’s.

Coyle also mentioned how the Society for Neuroscience opened his eyes to how special his research opportunity is at Binghamton University.

“I was talking to a professor who created a seminar called the ‘neuroscience of movement disorders’ and he had mentioned that Bishop’s lab is one of eight to 10 labs in the world that produce a really reliable model of L-DOPA-induced dyskinesia,” Coyle said. “That just blew my mind!”

When Coyle isn’t in the lab, he’s discussing new topics in evolution as part of the Evolutionary Studies Student Association and an evolution studies minor.

“Evolution isn’t just Darwin’s finches,” he said. “It’s also computers, fashion and anything that has little amounts of variation and differential success where one variety is more favored than another. It doesn’t drive my research but definitely gives me a perspective.”

Binghamton is only the beginning of Coyle’s path in pursuing science. He plans to attend graduate school, but first wants to take a few years off to delve into research either working as a lab technician or research assistant.

But first, although Coyle loves sitting in the lab, he also loves to travel and be outdoors and plans to take a year to himself to explore the country.

“After working I just want to pack my car and travel across the country and go to national parks,” Coyle said. “I’m already working on building a sleeping platform.”

Graduating from Binghamton is bittersweet for Coyle — but he remains grateful for the opportunities and experience that the University has given him.

“Not having a pre-med major at Binghamton has benefited me so much because it just opened doors,” he said. “Research has just been so hands-on. Every day is really something different.”