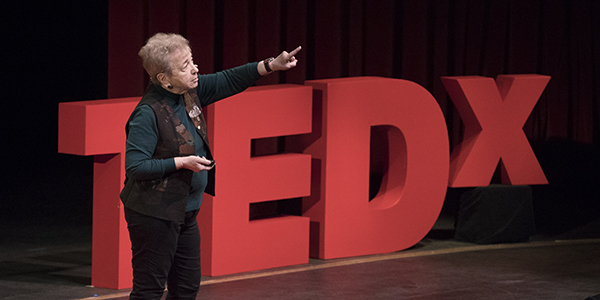 Ellyn Uram Kaschak grew up in the 1950s, when women weren’t supposed to go to college – except to earn an MRS degree. She came from a traditional family with no money or seeming desire to send her to college, so she found a way and educated herself. But she was challenged at every step, because she was a woman.

“I don’t know what made me want to do it, but from the time I was little, I always felt it wasn’t fair that girls couldn’t do everything that boys could do,” she said.

Kaschak got her education, starting with a Russian studies degree from Binghamton University’s Harpur College of Arts and Sciences. “I started in psychology and got bit by a rat, so I got a tetanus shot and changed my major and that was the start of my infamous career,” she said.

That career has brought her back to Binghamton, where, with a seven-figure gift, she has established the Ellyn Uram Kaschak Institute for Social Justice for Women and Girls, to continue her fight for equality for women.

“This is a wonderful investment in social sciences and humanities and what they can bring to solving really pressing problems of social justice for over half the world’s population, and we are very grateful for it and excited about it,” said Executive Vice President and Provost Donald Nieman.

“The institute will create an evidence base for practice to be looked at in a scholarly way,” he added, by bringing the rigor of scholarship to what are the best practices and what works, providing a feedback loop between practice and scholarship.

After graduating from Binghamton in 1965, Kaschak went on to earn her master’s degree at George Washington University and worked as a school psychologist before receiving her PhD in clinical psychology from The Ohio State University. The road to her doctorate was also a bit bumpy.

“George Washington wouldn’t let women into PhD programs, but then Title IX passed and that’s how I got into a PhD program,” she said. “I chose clinical psychology because it was at least about people. What really interests me is how people develop the theories they use to work with people.”

Her PhD program was innovative, she said, allowing students to decide what they wanted to study and then find mentors to help them. However, gender discrimination remained an issue.

“The women’s movement had started and I got into a consciousness raising group and I thought, ‘This is the way the world is, and I saw that everything is discriminatory and people should be able to do anything they want to do,’” she said. “We had a class on the psychology of women, and they let us do the course ourselves because all the faculty were men and they wouldn’t teach it.”

Kaschak became more and more interested in gender issues, and found herself at the center of a revolution. Considered one of the pioneers and developers of the field of feminist theory, she has spent her career focused on it.

Which brought her back to Binghamton and the institute she believes in.

A landmark international conference is being organized for April 23-25, 2020, that will take stock of women’s rights and vulnerabilities.

The “Women, Peace and Security: Re-evaluating Vulnerability”conference is the brainchild of Alexandra Moore, professor of English and co-director of the Human Rights Institute (HRI) at Binghamton University, colleagues at the Helena Kennedy Centre for International Justice at Sheffield Hallam University in the United Kingdom and a partner in South Africa. The Ellyn Uram Kaschak Institute for Social Justice for Women and Girls will join with the HRI and the Helena Kennedy Centre to host the conference at Binghamton.

Being held in recognition of the 20th anniversary of U.N. Resolution 1325 on Women, Peace and Security that reaffirmed the central role of women in peace and post-conflict rebuilding, the conference will also link to the Harpur College of Arts and Sciences 70th-anniversary celebrations and recognize Ellyn Kaschak’s career and generosity.

World-renowned speakers have already committed to the conference, which will be unlike most academic conferences, according to Moore.

“We’re trying to avoid the typical conference format where we read academic papers and ask questions before moving on to the next panel,” Moore said. “We’re looking at more interactive formats. For example, we will have workshops on different ways survivors express gendered violence through their bodies as well as on how to read and write feminist legal judgments. How could you write a law so that it might carry with it feminist principles versus not?

“We want to do that kind of skill building for students, scholars and activists so we understand that we are not just looking for laws to protect women and girls, but to see how laws can make those populations vulnerable,”

Moore added. “It’s an innovative approach to the law that opens up legal studies for non-lawyers and includes lots of other disciplines as well. It really shows scholarship and activism working together.”

There will be pre-conference activities and a post-conference publication, Moore said, and it will all involve students. “Having a non-traditional conference format will help draw students in.”

For more on the conference, visit the web.

Binghamton is the right place

“When I retired, I made out my will and where my money would go,” she said, planning for much of it to go to social action groups to continue her work. “Then I thought, ‘Why wait. Do it now. I want to do it while I’m still alive and can see it happening.’ So I thought of all the institutions I have been at and Binghamton came up.

“The smartest people I ever knew were most of the students and some of the faculty at Binghamton,” she said. “When I got to Binghamton, I found people I could finally have real conversations with, so I landed at Binghamton. (To hell with the weather!) That’s the place that can do it! There’s a creativity and an aliveness to Binghamton that I didn’t find anyplace else.”

Susan Strehle is the founding director for the institute. With assistance from an executive committee of faculty formed across schools and disciplines, she will develop a program supporting faculty affiliates, practitioners-in-residence, and student fellows at the graduate and undergraduate levels, all while fostering public engagement and outreach.

The strength of the institute comes from the donor, Strehle said. “Ellyn’s vision is that she wants this work to go back into the real world and improve lives and opportunities for women and girls. She understands the value of academic research, but knows it can also make a difference. What a smart idea!”

“One of the challenges is to bridge solid academic research with the need to make a ‘real-world’ difference,” she said. “Scholarship in some fields is designed for other academics. But a project that begins as an academic analysis can have clear social outcomes and, in the classroom, all of it does because of the way we teach students and talk about women and girls.

“It doesn’t end in the brain of the researcher,” she said. “What will be especially invigorating for the campus is Ellyn’s wish to have that real-world implication right around the corner, if not on the straight path of the research.”

Strehle sees the institute empowering research in many different fields that will contribute to Kaschak’s activist vision of a direct, positive impact on the lives of women and girls.

Kaschak will return to campus early in the fall semester to help launch the institute. Now professor emerita of psychology at San Jose State University where she taught from 1974 to 2009, she is also a visiting professor at the University for Peace in Costa Rica, where she lives half of the year.

Author or editor of 14 books including Engendered Lives: A New Psychology of Women’s Experience (1992), and Sight Unseen: Gender and Race through Blind Eyes (2015), Kaschak also edited the quarterly Journal of Women & Therapy for 20 years. She continues to write a blog for Psychology Today and a column for an international journal – and is currently working on a memoir.

Kaschak admits to having a wall of awards, but the most recent accolade is the Distinguished Career Award she will receive from the Association for Women in Psychology in March, which highlights her career shaping the development of feminist therapy: “…from early critiques of sexism in family therapy to her part in establishing pioneering feminist therapy collectives, from her LGBT rights advocacy to her scholarly interest in feminist epistemology, she has been in the forefront of defining how feminist therapy can address the complexity and diversity of women’s lives.”

“I want now to be a writer and do all I can for this institute,” she said. “Maybe it will fix something in the world and see all people treated as people according to who they are, not what they look like.”

Read coverage of Kaschak’s 2017 TEDx talk at Binghamton University: Seeing is Believing, or Is Believing Seeing?