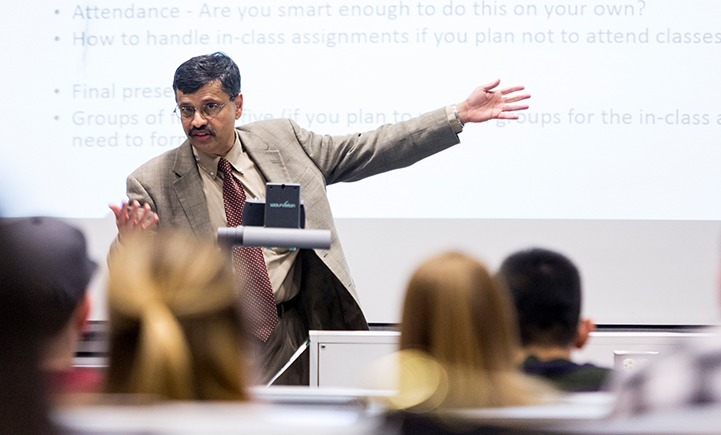 Since his arrival at Binghamton University School of Management a little over two decades ago, Professor Subimal Chatterjee has been consistently regarded as being a practical, relatable and inspiring instructor.

This reputation has led the SUNY Board of Trustees to appoint Chatterjee with a Distinguished Teaching Professorship.

“I woke up and checked my email and there it is. An email from President Stenger. He congratulates me for receiving this title, and tells me the press release from Albany will be coming soon,” he says. “That’s not something you typically expect to happen when you wake up on a Tuesday morning!”

While the School of Management has had faculty earn the rank of distinguished professor, Chatterjee is the first in the school to achieve the title for teaching.

SUNY’s criteria for the distinguished teaching professorship demands that candidates “must have demonstrated consistently superior mastery of teaching, outstanding service to students, and commitment to their ongoing intellectual growth, scholarship and professional growth, and adherence to rigorous academic standards and requirements.” 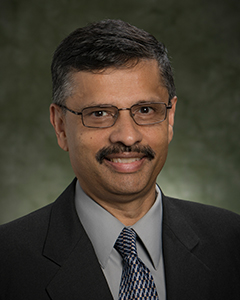 Chatterjee
Chatterjee, a professor of marketing, says it’s quite rare for business-school faculty to earn this title. While he never expected to receive an honor like it, the experience has made him reflect on the moments in his life that lead him to this point.

The more he reflects, the longer his “thank you” list grows, but the name at the top stays the same.

“This starts with my wife, Sudipta. I owe so much of what I’ve accomplished to her, including this,” he says.

Chatterjee has nothing but gratitude for his colleagues in the School of Management. Since coming aboard in 1997, Chatterjee says they’ve only made him a better person and a better teacher.

“Everyone works together to make this school run, and without that, we wouldn’t be able to teach. From Dean [Upinder] Dhillon’s encouragement and optimism to the hard work the advising office puts in to schedule all of us into the right classrooms, these are things that need to be in place to simply allow us to teach,” he says.

Chatterjee also holds a special appreciation for the many students he’s taught over the years.

“I’ve grown up so much since I first started teaching, and it’s all because of my interactions with students,” says Chatterjee. “When you’re young and brash, you think that you know everything and that students are just there to learn from you. Then you mature, and you learn how little you know about your students and how much you can learn from them if you, instead of them, ask the right questions. They’ve taught me how important it is to adapt to the students — and not the reverse.”

Chatterjee says it’s important to understand that students learn in different ways, and while teachers can’t accommodate every individual learning style, there’s a lot that can be done outside the classroom to ensure a course resonates with each student. 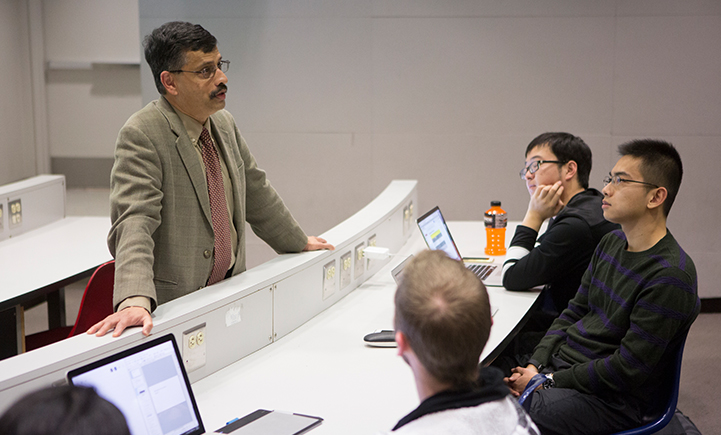 Image Credit: Jonathan Cohen.
“An actual class session is typically 85 minutes long, which doesn’t allow the time or space for innovation. That comes outside the classroom. I’m constantly asking myself what else I can do beyond the classroom setting that will make the course a success,” he says.

Chatterjee says he relies heavily on feedback from students, and not just at the end of the semester when the course is over.

“Like everybody else, I come to class with my notes. But at the end of class, I have a sense of what worked and what didn’t. Sometimes, for example, a student will ask a very interesting question that deserves to be in my notes. So, I’ll revise my notes. Sometimes I’ll even make a video to capture the way I should have taught the class and then redistribute it to students,” he says. “I learn from my students, and their feedback makes the courses and my teaching better.

Chatterjee says this moment ranks among some of the most exciting moments of his life. He recalls the thrill he felt meeting his wife for the first time as a freshman in 1978, as well as anxiously waiting for the phone to ring to receive his first job offer to teach at SUNY Stony Brook as he was wrapping up his PhD program.

“This one is right up there with those moments. Waking up to President Stenger’s email on a Tuesday morning and receiving this news ... I’ll never forget that,” he says, laughing.

“This has all been extremely humbling. I didn’t do this on my own. There are so many people who are responsible for this,” he says. “I’m standing on a lot of very strong shoulders, and I hope I can prove worthy of this title.”