Africana studies faculty member has been at Binghamton University since 1990

Nkiru Nzegwu, a professor in the Department of Africana Studies, has been appointed to distinguished rank by SUNY. Image Credit: Jonathan Cohen. 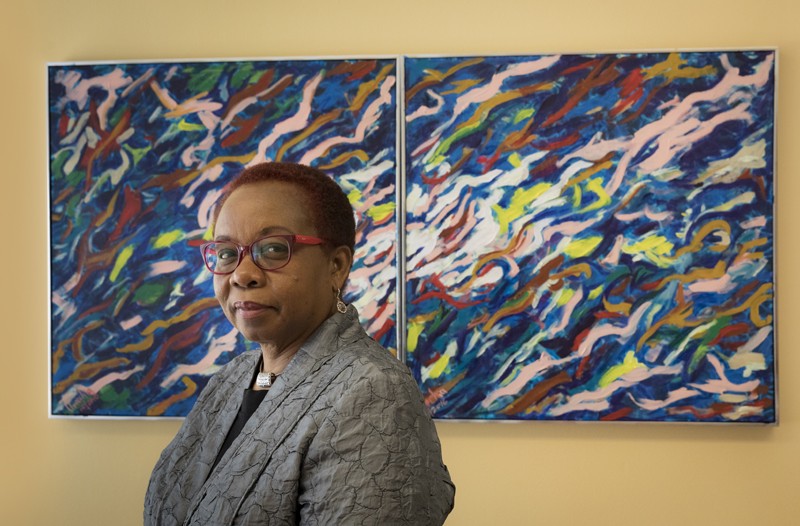 Nkiru Nzegwu, a professor in the Department of Africana Studies, has been appointed to distinguished rank by SUNY. Photography: Jonathan Cohen.
By Eric Coker

These descriptions have been applied to Nkiru Nzegwu. But she prefers a term that encompasses all of her talents and expertise: Renaissance woman.

“In my intellectual leaning, I might take issue with ‘Renaissance,’” said Nzegwu, a professor in the Department of Africana Studies. “But for most people, it will speak to them in the sense that I have a range of ideas and specialties. You do your best to excel in them because you take them all seriously.”

That range of work helped Nzegwu become one of 18 SUNY faculty members appointed to the distinguished rank on March 29. Nzegwu received a distinguished professorship, which is conferred upon faculty having achieved national or international prominence and a distinguished reputation within the individual’s chosen field. Subimal Chatterjee of the School of Management received Binghamton University’s other SUNY honor: distinguished teaching professorship.

Nzegwu’s accomplishments are far-reaching. They range from writing the book Family Matters: Feminist Concepts in African Philosophy and editing a number of books to authoring dozens of articles and book chapters. She has curated 11 art exhibitions and produced seven exhibition catalogs. Her paintings and poetry have been featured in numerous publications. She has also received fellowships from the Smithsonian Institution, the Getty Foundation, Cornell University’s A.D. White Society for the Humanities, the Canada Council and the UCLA Institute for the Study of Gender in Africa.

“For me, that’s what it means to be an African woman – culturally prepared to handle a lot of roles without having one role define your identity,” the Nigerian-born Nzegwu said.

It is an identity that Nzegwu has established since joining the Binghamton University faculty in 1990. She started in both the philosophy and art history departments and was also able to pursue her artistic interests.

“I had to make a conscious decision,” she said. “I will not be defined by people who do not understand multidisciplinarity.”

For Nzegwu, no area of expertise is given priority over another.

Nzegwu joined the Department of Africana Studies in 1998 and began working on internet projects that enabled her to reach an audience beyond Binghamton University. The Africa Resource Project, founded in 1999, provides African-focused content to users in more than 90 countries and served as a resource site for UNICEF. The Africa Knowledge Project, founded in 2010, offers an online platform for peer-reviewed journals and academic databases.

“It was a way for me to get a voice,” Nzegwu said of her online work. “The disciplinarity was so strong that it didn’t provide a space for me to do much of what I could do.”

In the classroom, Nzegwu has developed and taught dozens of undergraduate and graduate courses ranging from Race, Philosophy & the Law and African Women and Feminism to Ideologies of Black Creativity and Issues in Modern African Art.

The courses that stand out to Nzegwu, however, are Hip-Hop and Hip-Hop II in 2002.

“I didn’t think anyone in the administration knew what hip-hop was and the faculty were probably scratching their heads saying: ‘How can you teach hip-hop?’” she recalled with a laugh.

Nzegwu taught Hip-Hop with rapper/actress/writer Toni Blackman, who was the first U.S. hip-hop ambassador for the U.S. State Department. The class provided many students with “a sense of hope,” Nzegwu said, as they learned about the elements of hip-hop and concluded the semester with performances in a campus dining hall.

“It was phenomenal from the students’ point of view,” she said. “Students were scrambling to enter the class. I had students become turned on to academics because of hip-hop.”

Hip-Hop II, meanwhile, examined the musical form’s trends and impact around the world.

“It was an intricate, challenging course to teach,” Nzegwu said of Hip-Hop, laughing as she recalled receiving a copy of Jay-Z’s Decoded memoir in the mail. “It was (the students’) language, but it was a language that adults didn’t understand. It was the same way that adults of the time didn’t understand the language of jazz. Now everybody talks about classical jazz.”

Nzegwu, who has also served as chair of the Department of Africana Studies, shows no sign of slowing down. She has several manuscripts in “various stages of completion” and wants to address issues such as the gender-wage gap and a decreasing emphasis on the humanities.

“Being at Binghamton University has allowed me to do things that I may not have been able to do at other places,” she said. “My commitment to the issues of women might be one that takes on an activist’s role.”