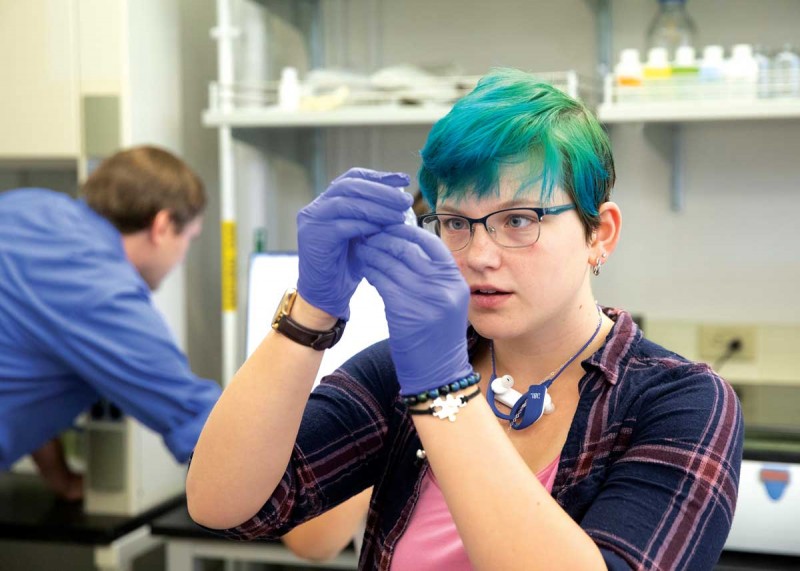 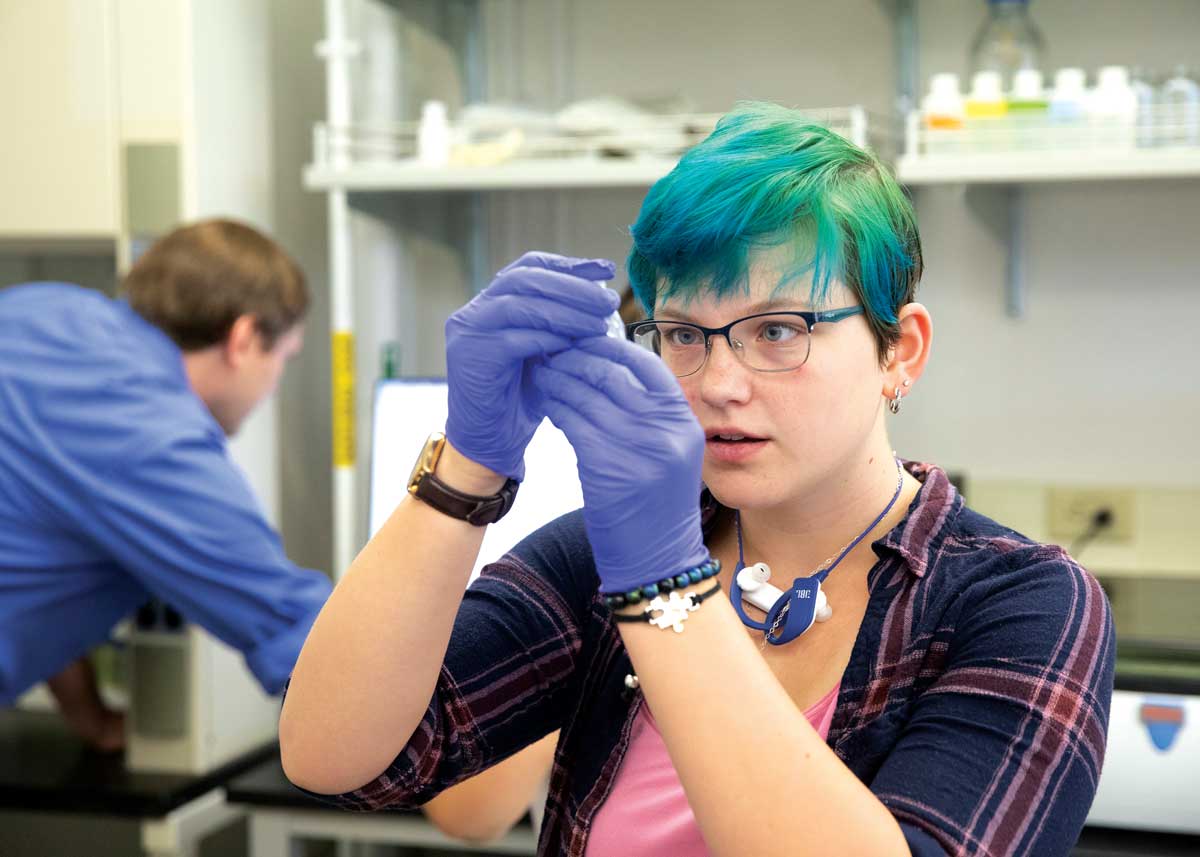 As a student at Minisink Valley High School, Rebekah Goetz didn’t have access to in-depth science programs or Advanced Placement classes. When she came to Binghamton University, she felt intimidated by classmates who had had those opportunities. But her time in the University’s First-Year Research Immersion (FRI) program gave her the confidence she needed to push forward.

“I felt really out of place here and I wasn’t doing as well as I wanted to, but whenever I got into a lab and saw that I was actually capable of doing real science, that I was capable of scientific thought and that I could apply this in a real setting, it instilled me with confidence,” Goetz said.

Launched in 2013, FRI provides first-year students with an authentic three-semester research experience in sciences and engineering. Participants learn the fundamentals of scientific research by collaborating with faculty on actual research ranging from smart energy to climate change. Binghamton is one of four universities in the nation that allows first-year students to conduct research in this way.

“It’s an exceptional opportunity for students to mature very quickly,” said Nancy Stamp, professor of biological sciences and founding director of FRI. “Coming into college is a huge change for students, and it gives them the chance to get accustomed to university life in a positively intellectual way.”

The FRI program comprises 10 “research streams,” each dedicated to a specific field in sciences and engineering, led by three to five faculty members. The Image and Acoustic Signals stream focuses on research and development in multimedia, human– computer interaction, acoustics and computer vision, while Community and Global Public Health focuses on collecting and analyzing data to create better solutions to health problems and to better inform public health policy. Ten research educators and 40 faculty from STEM departments across campus are involved.

During the first semester, students take a research methods course in which they learn how to read scientific literature to discover what’s known, what’s unknown and how to ask good research questions. In the second semester, they learn lab techniques and protocol, as well as propose a research project. In the final semester, students primarily work on their research projects in teams, presenting them to classmates and faculty for feedback throughout. The program concludes with a research report and a final poster session where students present their work.

According to Stamp, the success of FRI hinges on its unique, three semester setup.

“It’s all about learning the process of science and then applying that,” she said. “I like to use this analogy to help people understand why it’s more than one semester. If you think of a foreign language, one semester is not going to cut it. It usually takes about three to develop the mastery of the material, and a lot of practice. Research is very similar.”

FRI heavily emphasizes professionalization, and teamwork is a big piece of that. Students are assigned to a research group, where they form bonds and learn how to collaborate.

“Lots of studies show that first-year college students need to develop a support group very quickly or they get lost,” Stamp said. “In FRI, because they’re in a research track with 30 other people for three semesters and then they’re on a research team of four to five students, that becomes their go-to group. They develop deep friendships that last long after they’ve completed FRI. That’s huge for new students to have that developed in their first semester.”

As a research educator in the Microbial Biofilms and Human Health Research stream, Caitlin Light, PhD ’17, helps to figure out a manageable research project for each team to complete in the time allotted by the program.

“It varies stream to stream,” Light said. “I have a few projects of my own … and I really work hands-on with my tenure-track faculty team to come up with projects.”

Stamp is quick to point out that this isn’t “play” research. Students conduct real, publishable research in professional, state-of-the-art labs. For example, as part of his research in the Molecular and Biomedical Anthropology stream, Mauricio Montes learned wet-lab skills, like how to replicate DNA for a project tracking migration from Africa to the Pacific region.

“I think that FRI was able to make what research is a lot clearer to me, from the initial step of creating the topic idea to designing it, conducting the experiment, then writing it up,” he said.

Montes initially found the program’s motto, “Walk in a first-year student, walk out a researcher,” cheesy, but realized over time that it’s pretty accurate.

“Coming into a university you’re labeled as a first-year student, and that title can be really debilitating. ‘Oh, what can I do?’” he said. “I think that FRI is good for that because it shows you don’t have to wait… You can do research whenever; you just have to access it.”

Michelle Terry, who fell in love with research over the course of the FRI program, appreciated that the program eases students into research and doesn’t expect them to know how to write a research paper overnight.

“We had so much support, encouragement and help from our instructors, so I never felt lost,” Terry said. “But it was still a big jump from high school — conducting your own scientific research, not just Googling papers and writing an essay — a big dynamic switch. It was a lot all at once, but they walk you through it.”

Goetz was one of many students to find support in research educators like Light.

“I felt as if I was guided through my first year through these people,” Goetz said. “The way that they always believed in us was really what pushed me forward and was something I really needed.”

Light, likewise, is equally impressed by the abilities of FRI students.

“It’s easy for adults to say, ‘Let me do this for you; first-year students can’t do research yet,’” Light said. “But they can, and they are the most amazing students. They blow my mind every day with something they ask me, something they do, something they take the initiative for. These students are going to do great things, and this program is giving them that leg up.”

Stamp said one of the most rewarding aspects of being involved in FRI is watching students grow over the three semesters. A lot of them are at a “graduate level” in many ways when the program ends.

“We had a first-year student in the first semester who was pretty shy and didn’t talk so much,” Stamp said. “Toward the end of the program, we approached her about being on a panel at one of our open houses. She said, ‘Sure, I’ll do it. Not only that, if you want me to, I’ll go to the Union and stand on a table with a megaphone and tell them about FRI!’”

And that student isn’t the only one singing the praises of FRI. Goetz, who wants to apply to a PhD program in microbiology, encourages students who might be on the fence about doing research to apply.

There’s no guidebook for how to run a program as unique and complex as First-Year Research Immersion (FRI). Founding Director Nancy Stamp scrambled to build a strong infrastructure, from finding faculty who were interested in participating to securing labs for students to work in.

“The planning stage was one year. At a lot of places, it takes as many as five years. Every year we’ve been refining it,” Stamp says.

Six years later, the program is a success, but FRI isn’t resting on its laurels.

“We’re constantly working with each other, figuring out what hasn’t worked as well as we would have liked and how to improve that,” said Megan Fegley, current director of FRI.

Improving the program requires constant feedback from students, who submit reflection essays at the end of the program.

“A big piece of it is tracking what the students do. We do a lot of assessment surveys with them, find out what they think, what they’re gaining from it,” Stamp said.

Fegley and Stamp plan on introducing more “Life after FRI” events, which are offered to help students clarify their career paths. Beyond that, it’s making sure “the machine” is operating properly.

From the outside, it can look like putting out fires, Stamp said. “But we consider it more about continually learning how to make the program better.”​