Currently a cost accountant, her work touches every aspect of The Raymond Corporation 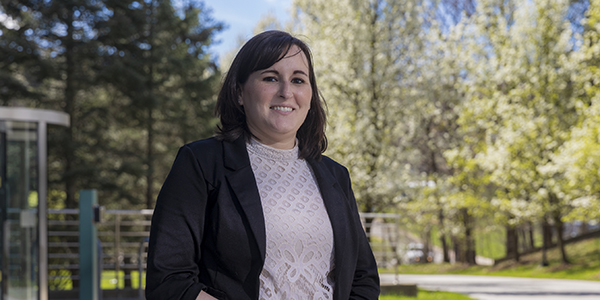 March was a crazy month for Ashley Piatt, with her taking two classes in the School of Management while working full time as a cost accountant and wrapping up year-end financials for The Raymond Corporation, a forklift truck and pallet jack manufacturer in Greene, N.Y. But the proverbial light is at the end of the tunnel for her as she prepares to graduate with her master’s degree in accounting on May 17.

Piatt has been taking at least two classes a semester since she started her coursework in the fall of 2017. “It’s been a lot of work,” she said. “My schedule has varied from semester to semester, but this spring I’ve been going into work between 6 and 6:30 a.m., then leaving work around noon to come to campus for my first class at 1:15. After class, I remote into work until my next class at 6 p.m. After class I go home and do classwork, or lately, I’ve actually been going back to work.”

At Raymond, Piatt primarily looks at inventory and trends. “I do a lot of variance analysis to look at where our costs should be in terms of our completed products,” she said. “And lately I’ve been analyzing our financials.

“It’s more research- and analysis-based and building an understanding of the true cost of our products and how we can manage them better,” she said.

“I like what I do in cost accounting as well. It’s different from strictly financial reporting and touches every aspect of the company,” she said.

As for going back to school, “If it weren’t for the company I work for, I probably wouldn’t be in school. They help pay the tuition to make it more feasible,” she said. “I had always told myself that I wanted to go back to school but wouldn’t go into debt to do it. My boss has also been very supportive and great because I’m basically gone half a day twice each week.

“We’ve made it work because it’s only temporary,” Piatt added. “But I’ve always tried to register for night classes so I wouldn’t have to leave work early. It’s challenging trying to juggle work and classwork, but somehow we’ve made it work.”

Moving up at Raymond is something Piatt aspires to. The company currently has five accountants at its Greene facility where she works, but has also taken over some of the work load for the company’s Muscatine, Iowa, facility. “I have more on my plate,” she said, “but the more that I think about it, being plant controller is something that I might want to do in the future.

Piatt is a firm advocate of getting up from her chair and stopping to see other people to have discussions at work, but she’s only occasionally on the shop floor, she said. “It can be overwhelming to go on the floor. They’ve changed the layout so I mostly try to avoid it, though it’s no different than getting lost on campus!”

The owner of two cats, Allie and Squirrel, Piatt is also a jigsaw puzzle fanatic when she has the time. “I love Thomas Kinkade puzzles for some reason,” she said. “Doing them takes away some of the stress, and I don’t have to think too hard. I started one the other day and finished it in about three hours. It’s very relaxing.”

As for the cats, Allie’s original name was Sheila, but she looked like an Allie, Piatt said. “And I got Squirrel a month after I moved into my house,” she said. “The two didn’t get along then and while they now tolerate each other, they still don’t always get along. I always say, he loves her and she hates him ─ the typical male/female relationship!”

As far as graduation, “I’m not going to walk at Commencement because I actually have to work on Friday afternoon,” she said. “Plus, being part time, I’m in a very different place in my life than most other students. It’s been a good experience, but it’s very different.”

But Piatt will have a small celebration, going out to dinner with friends.

“I plan on doing nothing for a while, then getting caught up on yard work and spending time with my family and 2 ½-year-old nephew,” she said. “My nephew is a riot and I try to see him as much as possible!”