Accounting major combines business education with passion for helping others 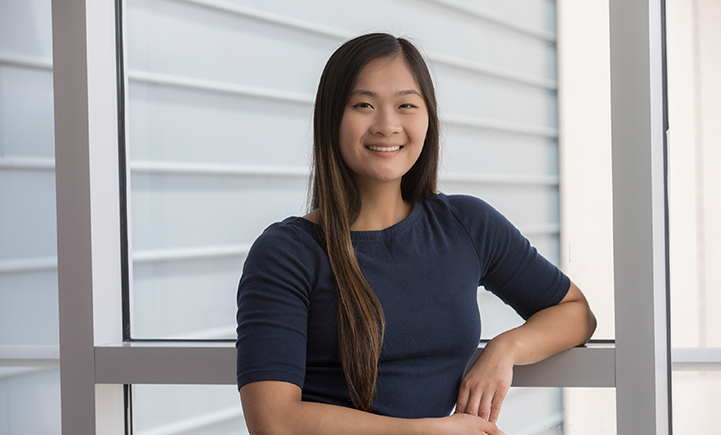 May 19 will be bittersweet for Vivian Wu for two reasons:

“I’ve been watching the show for a long time, and I’m really sad that it’s ending!” says the accounting major who can’t help but see some significance in the fact that both conclusive events are happening on the same day.

As fans worldwide reflect on the long journey that brought all their favorite characters to this point, Wu has been reflecting on her own journey at Binghamton University as it, too, comes to a close.

Her Binghamton story doesn’t feature dragons or a giant wall made of ice (although it might feel like it on some days in February!), but it does feature a heroine who grows into a leader, motivated by an intrinsic passion to help others.

Wu’s story begins in Brooklyn, where she was born and raised with her brother. Wu’s mother had immigrated to the United States from China.

“Growing up in Brooklyn was a wonderful experience,” she says. “I was exposed to so many different cultures and people. But it was also very hard at times, personally. I was raised by a single mom, and I did my best to make things easier for her.”

Wu attended Brooklyn Tech, and as high school was nearing an end, she had no idea what field she wanted to study, but knew that she wanted to go to college. This decision would make her the first person in her family to attend college as a first generation Asian-American.

“The scary part was that I had no idea what the college application process was like because nobody in my family had gone to college before. I started doing what my friends were doing and applied to a few colleges,” she says.

As the acceptance letters rolled in, Wu says Binghamton University stood out among the rest.

“I lived in the city my entire life, and I remember wanting to get out of the city and experience suburbia at that point. I wanted to try something different, and I thought Binghamton would provide autonomy and a different perspective that I wouldn’t get if I stayed in the city,” she says.

Looking back on the four years that have passed between then and now, Wu can say with certainty that Binghamton gave her that different perspective she had hoped for.

She is able to point to a handful of experiences, opportunities, people, classes and decisions that were instrumental in transforming her from a self-described “timid” freshman to an accomplished graduating senior ready to take on what’s next.

One of those decisions was deciding to enroll in the School of Management. During her sophomore year, she realized the pre-med track she was on wasn’t for her, so she transferred into the accounting program.

“I’ve always loved math, and accounting would allow me to keep focusing on that. The School of Management gave me the opportunity to do exactly what I wanted at the moment I realized I wanted it. It helped me redefine my education, and I realized that education isn’t only about the academics, but it’s also about the experiential learning,” she says.

The School of Management has always made experiential and outside-the-classroom learning a priority, encouraging students to get involved with as many organizations, internships and opportunities as possible. Wu did just that, finding ways to combine her business education with her drive to help others.

She joined Enactus, a student organization that focuses on social entrepreneurial solutions to uplift communities and create a more sustainable world.

“Enactus is a marriage of everything I love. It gave me experience with design thinking, project management and community organizing and allowed me to empower others in the process,” she says.

Jumping right in, Wu managed multiple projects and worked her way up to become president of the Binghamton chapter. Under her leadership, the group advanced to the Top 32 out of 450 schools at the Enactus National Competition (up from the Top 100 the previous year).

The projects Wu worked on strived to make positive changes in the Binghamton area. While some may view a college town as just a place to live for a couple of years while earning a degree, Wu was dedicated to getting as involved as possible with the place she’d call home for four years.

“Binghamton gives me a home vibe. It’s a small community where a lot of people know and care about each other. It’s nothing like the city, where you walk past hundreds of anonymous people every day. Here, you know everyone,” she says.

Her projects in Binghamton included helping Broome County combat brain drain by establishing a grant program that encourages young entrepreneurs to stay in the area. She also helped to address the lack of access to groceries on the Northside of Binghamton by collaborating with many stakeholders to develop recommendations and potential solutions.

Her involvement with community projects only scratches the surface of how much she gave back while at Binghamton. Wu has spent time volunteering for multiple organizations and served as a mentor for transfer students, drawing on her own experiences to help students.

“The biggest anxiety I see in transfer students is a fear of not being able to fit in. They may feel like they are coming in late to the game and may not know where they fit in,” she says. “My advice is that you should create your own space. Find what you really like doing and what you’re passionate about and be proactive about creating your own space.” 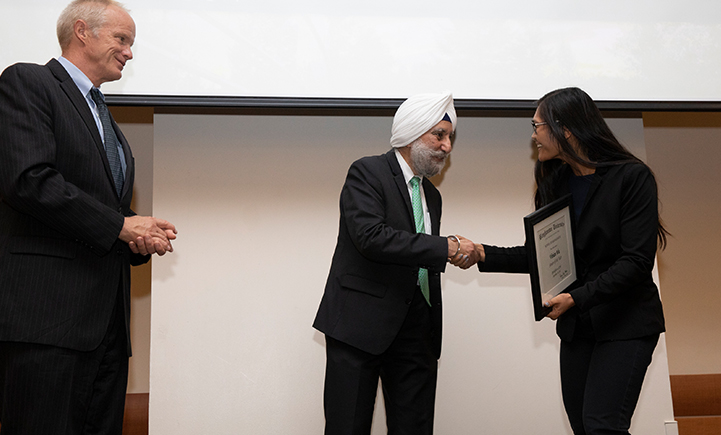 President Harvey Stenger, left, and School of Management Dean Upinder Dhillon, middle, present the 2018 SOM Senior of the Year award to Wu at the SOM Spotlight event in Sept. 2018. Image Credit: Jonathan Cohen.
As the recipient of the SUNY Chancellor’s Award for Student Excellence and the School of Management’s Senior of the Year Award, it’s clear that Wu has garnered respect from her peers for the space she has created for herself over the past four years.

As for life after Binghamton, Wu has accepted a job at KPMG as a risk advisory associate and will be starting just weeks after commencement.

“I’m excited for what’s next, but I’m going to miss the people here. I’ve made life-changing connections with the deans, professors, friends and community members. I’ll definitely miss the people the most,” she says.

Wu says one of the Game of Thrones character that has resonated with her the most over the years is Daenerys Targaryen. When you consider her Binghamton story and the accomplishments she made along the way through perseverance, hard work and dedication, it’s no surprise.

And while she’s not leaving Binghamton with fire-breathing dragons or with an army of Dothraki, she’s leaving with a long list of achievements, life-changing experiences and a confidence in herself that she didn’t have at the beginning of her journey.

“I have no regrets. I’ve taken advantage of every opportunity that’s come my way and I’ve opened myself to many new ideas,” she says. “I’m so appreciative for how much I’ve grown and for what I’ve learned.”