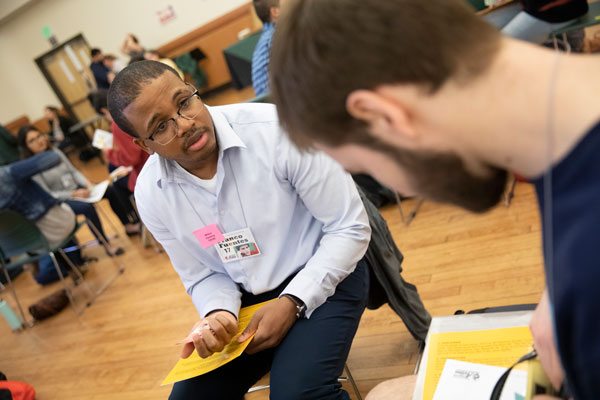 Seventeen-year-old Franco Fuentes sat, anxiously awaiting his mother’s return with news she had gotten a job. If not, he hoped she would have bus fare so they could pawn something to get money for food.

But Felicia Fuentes returned home without a job and too late to go to the pawn shop, so she, Franco and 14-year-old Francisca Fuentes went to bed hungry.

Sadly, this scenario is common around the world.

In this case, however, it was a simulated experience and Franco, Felicia and Francisca were all portrayed by Binghamton University graduate students taking part in an exercise intended to teach them about the bureaucracy of poverty, food insecurity and how poverty impacts healthcare. 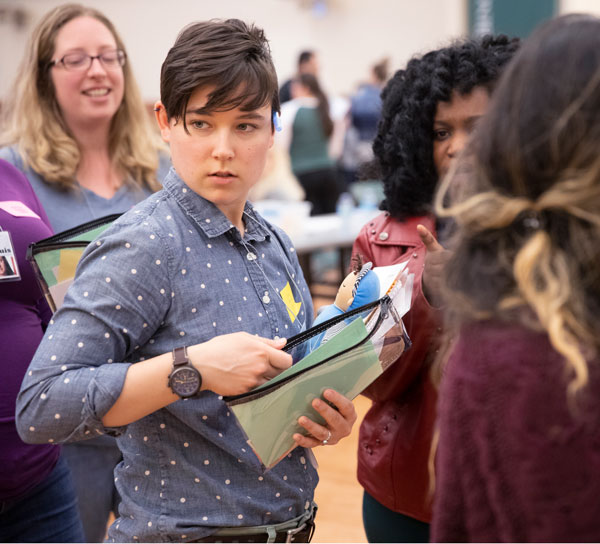 Jessica Bennett, a social work student in the College of Community and Public Affairs, portrayed a 20-year-old with a baby who was trying to help her family make ends meet. Image Credit: Jonathan Cohen.
The simulation is a requirement of an interprofessional education (IPE) course that is part of an IPE program the University launched in 2017. This initiative brings together social work students from the College of Community and Public Affairs, nursing and public health students from the Decker School of Nursing and pharmacy students from the School of Pharmacy and Pharmaceutical Sciences, and aims to teach them how to communicate with and work effectively in healthcare teams.

Simulation events were held over three sessions (April 17 and 24, and May 1) to accommodate the approximately 180 students who participated. This was the second year the University held the event; however, master of public health (MPH) students participated for the first time since that program is only a year old.

Binghamton University collaborated with the Rural Health Network of South Central New York (RHNSCNY), a nonprofit organization that works to eliminate barriers to healthcare for rural residents, to conduct the simulations.

During the three-hour immersive experiences held on Binghamton’s campus, each student was assigned to a family and given a dossier — based on a real family — describing that family’s situation and available resources (cash, benefits, belongings). Family sizes ranged from one to several individuals and included infants and the elderly. Students from different disciplines were mixed within the teams.

The simulation was conducted with the families in groups in the center of a large room. Around the perimeter were tables representing community resources and services including a bank, Department of Social Services, employer, mortgage company, school, health center, pawn shop, homeless shelter, jail and more. Tables were staffed by community volunteers.

Families were tasked with providing basic necessities and shelter over the course of four 15-minute “weeks.” Their goal was to keep their homes secure and utilities on, buy required amounts of food each week, make loan payments, pay for clothing and miscellaneous expenses, keep their school-aged children in school and respond to unexpected situations. Among these unplanned-for circumstances were “luck of the draw” cards, which were handed out randomly and gave lucky students extra benefits, while unlucky students had to deal with issues like being robbed or having their residence damaged by flooding.

The April 24 event had a single-person family, with pharmacy student Chinedum Obiora, originally from Nigeria, portraying 85-year-old Eunice Ussar. During the April 17 event, the one-person family robbed a bank so she could go to jail rather than feel socially isolated. For Ussar [Obiora], the April 24 experience was different. A “luck of the draw” lottery win of $24 eased her money pinch and she actually ended up with $80 in the bank. 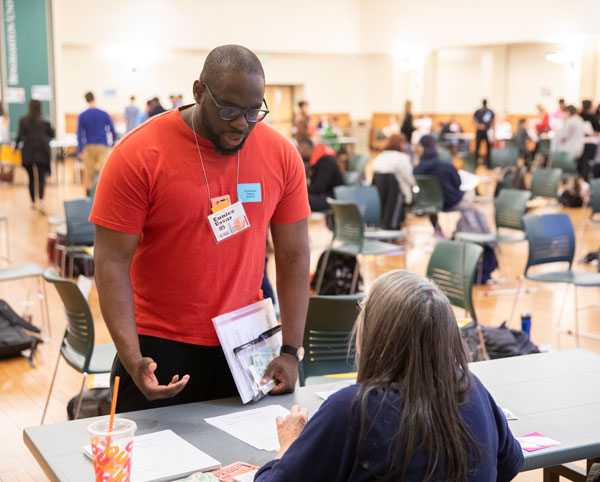 First-year PharmD student Chinedum Obiora might not look it, but he was playing 85-year-old Eunice Ussar — a family of one — during the April 24 interprofessional simulation experience. Image Credit: Jonathan Cohen.
“I’m having an easy life this week,” Obiora said.. “I paid off all my bills (including a $25 per month pre-burial charge), have money in the bank and won a lottery that helped me out. $24! That’s crazy! And I was scared someone would rob me.”

But the experience still had an impact on Obiora, who spent most of the simulation going between services to cobble together the funds to stay afloat. And there were frustrations. As Ussar, Obiora used a transportation pass (required to travel from one “location” to another, unless the family has a car, which Ussar didn’t) to travel to pay her utilities. She was short, but needed to pay at least $82 of her $205 monthly utility bill to avoid them being turned off. After making it through the utilities hurdle, she went next door to pay her rent — and even though it was right next door [a volunteer sitting at the same table as the utilities volunteer] Ussar was required to burn another transportation pass.

Jessica “Jess” Bennett, a first-year social work student, went through a rollercoaster of ups and downs, both emotionally and financially, during the simulation. Portraying 20-year-old Rita Rogers, who lived with her family but had a baby to care for, she pawned a camera and stove to pay for childcare, and after filling out the childcare form, learned that it would cost $80 a week, not $80 a month. Even with a part-time job at the SuperCenter, she couldn’t afford that — or much of anything else.

“I realize now how hard it is to juggle everything, especially when you don’t have something you need,” Bennett said, shortly before she and the Rogers family were illegally evicted from their home. “Even trying to cash my father’s paycheck for him. I couldn’t do it because I didn’t have his ID. ...and I could not focus on my education.

“I was supposed to be in college, which, when completed, could provide me with a career and a better source of income. Unfortunately, I could not afford childcare for my infant so I ended up bringing him everywhere with me. I had no “me” time, time to prepare nutritious meals for myself and my family, or have any sort of entertainment. All the time I had was focused on survival,” she said.

Bennett said the simulation provided a valuable lesson as she continues her studies. “I now see the importance of understanding the structure, interactions and feeling of the neighborhood where the client lives and how the clinic fits in the context of the community,” she said. “I will strive to make sure that clients feel informed about how their community resources function and feel that they can ask if they feel confused or overwhelmed.”

Luis Midence is one of three students from the MPH program who participated during the April 24 event. He portrayed 15-year-old Mandy Morris-Moore, who lived with her mother, father and grandmother. Mandy [Midence] managed to get to school every week and held down a part-time job at the SuperCenter. She and her family successfully navigated all the challenges, worked together and earned enough money to meet their monthly needs.

Midence works at AmeriCorps VISTA, a national service program that aims to alleviate poverty, so he already understands the impact of poverty and the bureaucracy surrounding it. His takeaway from the simulation experience was different than most other students.

“As a public health professional, it was really beneficial to learn about more resources that are available to help people,” he said. “It was also refreshing to learn different perspectives by working as part of a team.” 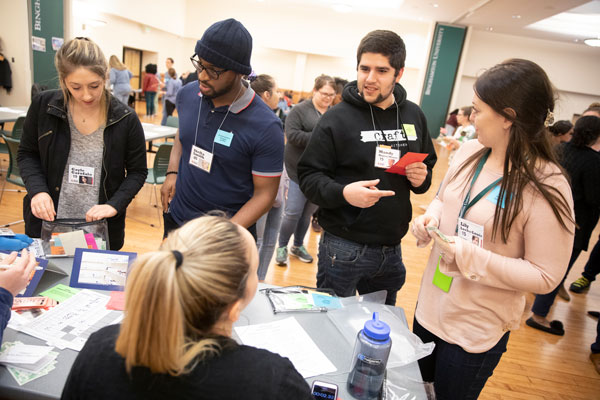 Luis Midence (black sweatshirt), a student in the Master of Public Health Program, purchases food and clothing for his family during a simulation event that is part of Binghamton's interprofessional education program. Image Credit: Jonathan Cohen.
Despite their ability to work as a team, the Fuentes family didn’t have positive results. Inability to find work, scarce transportation passes, difficulty getting much money despite pawning several items, and a “luck of the draw” card that resulted in flood damage to their home left the Fuentes family without food for two weeks.

“You take so many things you have for granted,” said Milton Harding, a master’s student in the family nurse practitioner program, who portrayed Franco Fuentes. Although originally from Guyana, Harding has lived in Johnson City, N.Y., most of his life.

“Living in middle class, you don’t really understand how much those around you are struggling. It’s a reality check for sure,” he said.

Harding works as an ICU nurse at a local hospital and intends to remain in the area once he becomes a nurse practitioner. Since he wants to practice in an underserved area, he felt the simulation was especially helpful and eye opening.

“I didn’t think this would impact me this much, but it has totally changed my perspective,” he said.